Former AC/DC bassist Mark Evans talked to The Australian and in the new book The Youngs: The Brothers Who Built AC/DC, reveals that the band nearly fired Bon Scott after overdosing on heroin in Melbourne in 1975. Evans said AC/DC’s founding members Angus and Malcolm Young, who were anti-drugs, took a dim view of their iconic frontman overdosing on heroin in Melbourne in 1975.

“There were some doubts about Bon at that stage,” Evans said. “He’d had a problem or he’d had an OD very early on. It was just a dabble . . . Bon just made a bad decision. It was only one bad decision. From what I was led to believe and came to believe, it was a very, very isolated incident. I never saw any evidence of anything remotely like heavy drugs (when I was in AC/DC).”

To read the rest of the article visit TheAustralian.com.au.

With sales of over 200 million albums, AC/DC is not just the biggest rock band in the world. It’s a family business built by three brothers: George, Malcolm and Angus Young. And, as with any business, some people prospered while others got hurt along the way.

The Youngs: The Brothers Who Built AC/DC is unlike any AC/DC book you’ve read before. The 320-page paperback is less a biography, more a critical appreciation, it tells the story of the trio through 11 classic songs and reveals some of the personal and creative secrets that went into their making.

Important figures from AC/DC’s long way to the top open up for the very first time, while unsung heroes behind the band’s success are given the credit they are due.

Accepted accounts of events are challenged while sensational new details emerge to cast a whole new light on the band’s history – especially their early years with Atlantic Records in the United States.

Former AC/DC members and musicians from bands such as GUNS N’ ROSES, DROPKICK MURPHYS, AIRBOURNE and ROSE TATTOO also give their perspectives on the Youngs’ brand of magic.

Their music has never pulled its punches. Neither does The Youngs.

After 40 years, AC/DC might just have got the serious book it deserves.

For more details and to order visit Randomhouse.com.au.

Coming this month in the UK via Plexus Publishing is the new book, Cemetary Gates: Saints & Survivors Of The Heavy-Metal Scene, by Mick O’Shea. The following describes the upcoming illustrated paperback: 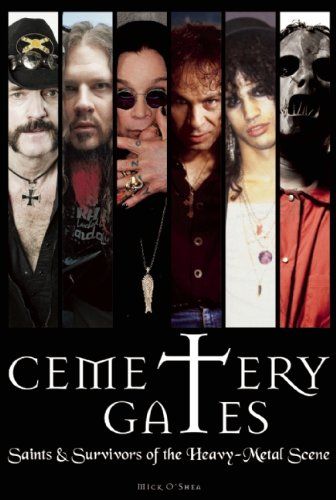 Between genius and madness, this world and the next, there’s nothing but the faintest flicker of a pulse and the cemetery gates.

Whatever their deadly sin – be it lust, greed, abuse of winged creatures or murder most foul – these prodigiously talented hellraisers have all come dangerously close to the edge. Tragically, not all of them have returned. Between tragic saint and raucous survivor, the line remains perilously thin.

“People ask me how I’m still alive and I don’t know what to say”, Ozzy once shrugged. Cemetery Gates provides the heaviest answer you’ll find this side of heaven.

Posted by aliblackdiamond on May 17, 2013
Posted in: Int. News. Tagged: Ac/Dc, Bon Scott. Leave a comment

According to The Pulse Of Radio, AC/DC has officially given its endorsement to a campaign to get a statue of late lead singer Bon Scott erected in his hometown of Kirriemuir, Scotland. The band posted an item about the project on its official web site and pointed to the site of DD8 Music, organizers of the campaign, where fans can donate to the project’s fundraising drive.

The project needs to raise 50,000 pounds, or $75,000, by June 5 to move forward, and is about a third of the way there. DD8 Music has launched a Kickstarter account to raise the necessary funds.

DD8 Music‘s Graham Calloway said he didn’t speak with anyone from the band before they promoted the campaign on their website.

Guitarist Malcolm Young told The Pulse Of Radio a while back that Scott‘s spirit has always stayed with the group. “He’s always there,” he said. “He never left the band. That’s just the way that we are. You know, we’re very tight as a unit. It’s the reality of it all. You just never forget. There’s so many stories with Bon, and it creeps in every day. And if it’s not one of the band, it’s a fan.”

Individual members of the group past and present have offered their support previously, with former bassist Mark Evans saying last September, “It’s so amazing that Bon is getting honored like this, especially since Scotland is such an important place in the history of AC/DC. Bon already had a street named after him in Kirriemuir and now this!”

The statue would be the second of Scott, who was born in Kirriemuir in 1946 but moved with his family to Australia in 1952. An Australian statue honoring Scott has already been on display since February 2008.

The singer died in 1980 at the age of 33 from alcohol poisoning. He sang on AC/DC‘s first six studio albums, including “High Voltage”, “Dirty Deeds Done Dirt Cheap”, “Let There Be Rock” and “Highway To Hell”.

‘Bon Scott: The Legend of AC/DC’ In Pre-Production

Rock and roll “history” was made on January 14 as filmmaker J.R. Getches shot the first- ever dramatic portrayal footage of late AC/DC frontman Bon Scott, starring U.S. actor/singer Rob Liotti, in Charleston, South Carolina. This initial scene will serve as a teaser film and prelude to the upcoming trailer now greenlit and in pre-production. “Bon Scott – The Legend of AC/DC” was originally reported upon in August of 2012 and garnered viral worldwide attention.

Russell Cotter of High Voltage Productions Pty. and an Australian said: “The Bon Scott movie has got legs! Rob has worked tirelessly to get the movie off the ground and it has traction.

“More than 30 years after the death of AC/DC‘s legendary frontman, Rob has promoted the legacy of Bon Scott, the man, and has been able to pull together the story, the people, and the logistics of what will soon become a landmark movie. Fans around the world will finally get to see what they have long waited for.”

A confidential meeting was held in mid-November 2012 to solidify commencement of filming and involved key staff as well as key principal role actors. Also noteworthy is the fact that an agreement has been reached with Charleston Sound Studio, LLC in neighboring Mount Pleasant, South Carolina where the trailer’s theme song will be recorded. Owner and chief engineer Jeff Hodges has been tasked with capturing the all-important track. The studio has been utilized by stars such as multi-platinum artist Darius Rucker and noted Nashville producer Frank Rogers.

While there has been much speculation over the casting of roles within the project, radio interviews with the film’s star (both in Australia and the United States) have given indication that some preliminary casting has been accomplished for the trailer. It has been learned that besides the principal role Liotti holds as Bon Scott, the roles of Malcolm Young, Angus Young, Mark Evans, Phil Rudd and Margaret “Silver” Smith have been cast thus far. In preparation for shooting, the film’s star took on a serious physical regimen dropping some 40 lbs. in preparation for the role.

Director J.R. Getches added: “The story of Bon Scott is a classical tragedy. He travelled across the world, made his mark, and then died too young. He was a misfit who found his place in rock music and became immortal pursuing his dream. This is a story worth telling.”

The associate production company High Voltage Productions Pty. is seeking an independent production house and is said to be waiting for the right fit and vision. But they have pledged that the film’s trailer will serve as a vehicle for fundraising and an instrument to give visual perpetuity to the investment interests at-large, as well as the public.

AC/DC: Bon Scott To Be Honored With Statue In Scottish Birthplace

According to Dailyrecord.co.uk, AC/DC legend Bon Scott is to be honoured with a statue in his Scottish birthplace.

The rock idol, who died aged just 34 in 1980, was born in Kirriemuir, Angus, before moving to Australia with his family when he was six.

Now Kirriemuir community group DD8 Music, who are behind the annual Bon Scott music festival in the town, have asked sculptor John McKenna to design a statue as a lasting tribute.

John said: “It’s early days, but it’s a great honour. Bon Scott was an icon from my teenage years.” 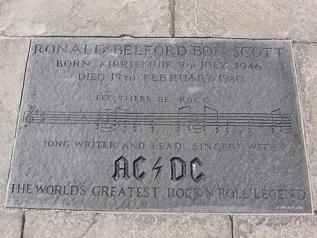 After the official press release of an upcoming docu-drama film production about late AC/DC vocalist Bon Scott went viral on the Internet internationally last week, it has been learned that the film project organizers are seeking a producer to back the project. 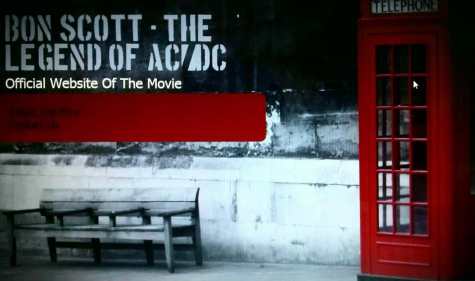 “We have been approached by a number of prospective producers for this project in a fairly short period of time,” said a source. “But, this is a historic opportunity for a producer to step in and back a project now with international credibility.”

Much of the speculation centered around the project is who would handle the starring role portraying Scott. Moreover, who knew enough about the story to write a viable screenplay for the project? Rob Liotti (pictured below) took on the task. Liotti has portrayed Scott onstage for years in his tribute band TNT and is actually an American musician, writer, and actor. 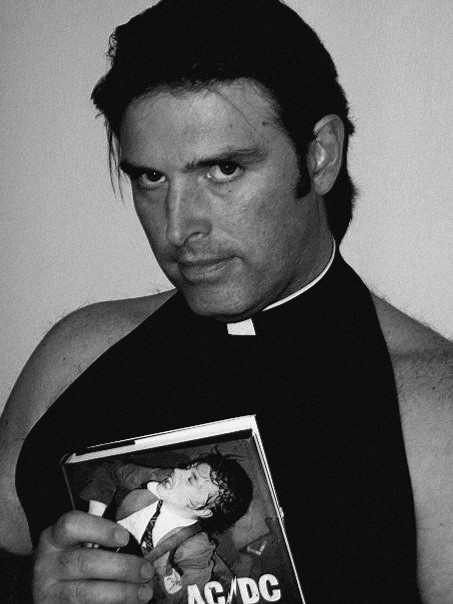 “This is an an extremely unique opportunity for a producer to become involved with a project that will have built-in, worldwide appeal,” Liotti said. “One thing of integral importance, however, is that it be the right producer for the project. This is a movie about a music icon. Therefore, the right producer clearly considers monetary investment and ROI [Return On Investment], but the passion needs to be there as well,” the actor went on to say. “At this point, we are open-minded as to whom that person or company may be, but no agreement has been made to date. The budget for this film is certainly not over-the-top in necessity, but it is an investment nonetheless…”

Asked whether he thought the production investment may come from American or Australian investors, Liotti said that “it is difficult to speculate on that… it could come from New Zealand or the U.K. for that matter… I’m sure there will be a lot of radio interviews coming up, and that will surely enter into the topical discussion. I also just released a radio single called ‘Long Gone’ with SUITE 16, and another one to follow, so I am a busy guy right now! It’s pretty overwhelming — in a good way.”

Fans can keep up with the project at www.thebonscottmovie.com as well as on Facebook.

Bon Scott died on February 19, 1980 in London, England. He choked to death on his own vomit while sleeping in a friend’s car. According to the AC/DC FAQ web site, he and the friend, a musician named Alisdair Kinnear, had been drinking the evening of the 19th and Bon apparently fell asleep during the ride home. Kinnear could not wake Bon, so he left him in the car to sleep. Kinnear awoke early in the evening on the 20th, checked on Bon, and found him unconscious in the car. Bon could not be revived, and was pronounced dead.