Sadly, this September marks 50 years since the passing of Jimi Hendrix and 40 years since the passing of John Bonham. To celebrate both legendary and influential artists, respected author/journalist Greg Prato has assembled two new books, ‘Avatar of the Electric Guitar: The Genius of Jimi Hendrix’ and ‘BONZO: 30 Rock Drummers Remember the Legendary John Bonham.’ Each book is priced at $19.99 for the paperback and $9.99 for the Kindle version:
www.amazon.com/dp/B08GFPM8RS
www.amazon.com/dp/B08GQQSB8K

It is widely believed that Jimi Hendrix was one of the greatest rock guitarists of all time…and quite possibly, THE greatest. All you have to do is compare what rock guitar sounded like before Jimi burst on the scene in the late ‘60s, and what it sounded like after. And in addition to trailblazing new sounds and approaches, his influence reached beyond just the guitar community – he quickly became the literal poster child for the psychedelic rock movement, due to his unique fashion, song lyrics, and a now-iconic performance at Woodstock. But sadly, Jimi’s story also remains one of rock’s most tragic – dying at the age of 27 on September 18, 1970 (just as he was playing some of the biggest concerts of his career and entering a new musical phase). To mark 50 years since his passing, ‘Avatar Of The Electric Guitar: The Genius Of Jimi Hendrix’ has been assembled – comprised of interviews with renowned guitarists (including Kirk Hammett, Alex Lifeson, Steve Vai, John Petrucci, and Kim Thayil, among others), discussing what made Jimi so special, and ultimately, a legend.

Few rock drummers remain as universally praised as Led Zeppelin’s John Bonham. Listen to any Zeppelin album, and you will hear a virtual showcase on expert rock drumming – while never getting in the way of the group’s other members and their contributions, singer Robert Plant, guitarist Jimmy Page, and bassist John Paul Jones. But sadly, one of rock’s all-time greats died tragically young – he was only 32 years old – resulting in the end of one of rock’s most celebrated bands. To mark 40 years since his passing, ‘Bonzo: 30 Rock Drummers Remember the Legendary John Bonham’ has been assembled – comprised of interviews with some of the top drummers of rock (including Kenny Aronoff, Mike Portnoy, John Dolmayan, Brian Tichy, and Steve Gorman, among others), discussing what made Bonham such a special and unforgettable drummer.

Greg Prato is a writer and journalist from New York, whose writing has appeared via such outlets as Songfacts, Vintage Guitar Magazine, and BraveWords. He is also the author of several popular books, including ‘Take It Off: Kiss Truly Unmasked,’ ‘Touched by Magic: The Tommy Bolin Story,’ and ‘A Rockin’ Rollin’ Man: Bon Scott Remembered,’ among many others. And you may have even heard him on one of his many radio or TV appearances, which include interviews on ‘The Howard Stern Wrap-Up Show,’ ‘Eddie Trunk Live,’ and ‘Feedback with Nik Carter and Lori Majewski.’ ‘Avatar of the Electric Guitar’ and ‘BONZO’ are his 31st and 32nd books overall.

‘Avatar of the Electric Guitar: The Genius of Jimi Hendrix’: http://www.amazon.com/dp/B08GFPM8RS

There have been few rock singers as beloved as the late/great Bon Scott of AC/DC. After all, it was his unmistakable vocals and street-wise/sexually-charged lyrics that were a major part of such all-time classic rock anthems as “Highway to Hell”, “Sin City”, “Whole Lotta Rosie”, “Dirty Deeds Done Dirt Cheap”, and “TNT”. And it was the “Bon era” that set the stage for AC/DC to go on to become one of rock’s most universally popular and enduring bands.

But few rockers partied as hard as Bon—sadly resulting in his death at the age of 33 on February 19, 1980, just before AC/DC scored their worldwide breakthrough, with the mega-selling ‘Back in Black.’ To mark 40 years since Bon’s tragic passing, the just-released ‘A Rockin’ Rollin’ Man: Bon Scott Remembered’ has been assembled by journalist/author Greg Prato—comprised entirely of all-new interviews with renowned rockers, discussing what made Bon so special and unforgettable.

Priced at $12.99 for the paperback and $7.99 for the Kindle version, the book features vintage photos and all-new interviews with the likes of Tony Platt (engineer of ‘Highway to Hell’ and ‘Back in Black’), Simon Wright (AC/DC drummer: 1983-1989), KK Downing (ex-Judas Priest guitarist), Scott Gorham (Thin Lizzy guitarist), Bun E. Carlos (ex-Cheap Trick drummer), Michael Monroe (Hanoi Rocks singer), and Phil Anselmo (Pantera singer), among many others.

Greg Prato is a writer and journalist from New York, whose writing has appeared via such outlets as Songfacts, Vintage Guitar Magazine, and Consequence of Sound. He is also the author of several popular books, including ‘Take It Off: Kiss Truly Unmasked,’ ‘Touched by Magic: The Tommy Bolin Story,’ and ‘Iron Maiden: 80 81,’ among many others. And you may have even heard him on one of his many radio or TV appearances, which include interviews on ‘The Howard Stern Wrap-Up Show,’ ‘Eddie Trunk Live,’ and ‘The Ron & Fez Show.’ ‘A Rockin’ Rollin’ Man: Bon Scott Remembered’ is his 30th book overall.

Few rock bands were as successful as the SCORPIONS by the mid ’80s – headlining arenas/stadiums worldwide, scoring two mega-selling albums (the platinum-certified “Blackout” and the triple-platinum certified “Love at First Sting”) and two hit singles/videos (‘No One Like You’ and ‘Rock You Like a Hurricane’). But what quite a few newcomers to the band didn’t realize was that the Scorpions had been regularly recording music since 1972, and that throughout the remainder of the decade, featured two guitarists (Michael Schenker and Uli Jon Roth) at separate points that are considered legendary amongst the heavy metal masses. And while such albums as “Lonesome Crow,” “Fly to the Rainbow,” “In Trance,” “Virgin Killer”, “Taken by Force”, “Tokyo Tapes,” and “Lovedrive” did not come close to obtaining the commercial success of the aforementioned ’80s era efforts, they inspired and influenced countless renowned musicians.

‘German Metal Machine: Scorpions in the ’70s’ is the first-ever book to focus solely on this period of the band. Interviews include such former members as Michael Schenker, Uli Jon Roth, Francis Buchholz, and Herman Rarebell, longtime Scorpions producer Dieter Dierks, plus members of other bands that are major admirers, including KK Downing (Judas Priest), Billy Corgan (Smashing Pumpkins), Joe Satriani, Tom Hamilton (Aerosmith), David Ellefson (Megadeth), Alex Skolnick (Testament), and Eddie Trunk (‘That Metal Show’), among many others, while Kirk Hammett (Metallica) provides a foreword.

Greg Prato is a Long Island, New York-based journalist, who has written for Rolling Stone, Songfacts, and Vintage Guitar, and has authored such books as ‘Survival of the Fittest: Heavy Metal in the 1990’s,’ ‘Iron Maiden: ’80 ’81,’ ‘The Eric Carr Story,’ and ‘Touched by Magic: The Tommy Bolin Story.’ ‘German Metal Machine’ is his 19th book overall. 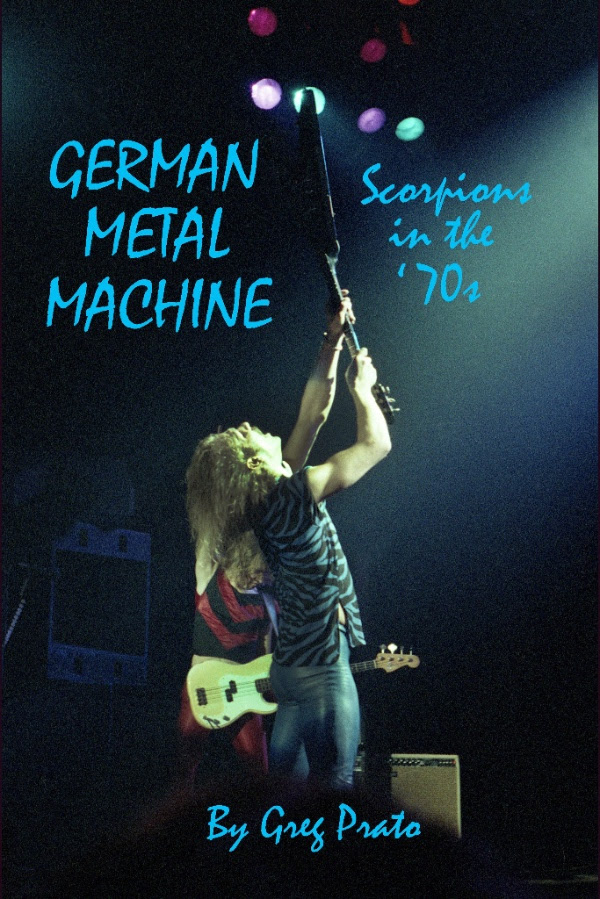 New Book: “Survival Of The Fittest: Heavy Metal In The 1990’s” Tells Story Of The Genre’s Best – Yet Most Difficult – Decades

Since its inception in the late 1960’s, heavy metal has experienced quite a few ups and downs in popularity. But there was one specific decade that sticks out as the most troubling – the 1990’s. In what seemed like one fell swoop, a style of metal that had been popular for much of the 1980’s was rendered obsolete, and in its place, was a much more real, raw, and unique approach – detected in several new metal-based “sub-genres.” Add to it several changes in the music industry and media, and it appeared as if traditional metal may have met its expiration date…before several bands (and a certain traveling festival tour) helped put headbanging rock back on track.

Greg Prato is a Long Island, New York-based journalist, who has written for Rolling Stone and Guitar Player, and has authored such books as ‘Iron Maiden: ’80 ’81,’ ‘The Faith No More & Mr. Bungle Companion,’ ‘The Eric Carr Story,’ and ‘Grunge is Dead: The Oral History of Seattle Rock Music.’ ‘Survival of the Fittest’ is his 16th book overall.