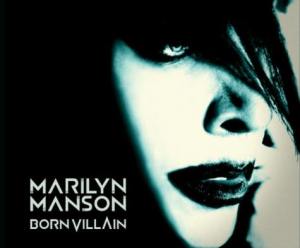 Marilyn Manson give us Born Villain it is the bands eighth full-length studio album. It was released on May 1, 2012 by Cooking Vinyl Records and Manson’s own vanity label Hell, Interviews with the band’s frontman described that the record would be in a heavier tone than that of previous works, describing the sound as a “suicide death metal” style.

When I heard that Marilyn Manson was bringing a new album I just thought oh no if it is going to be like the last three he made I am not going to enjoy it. But I must admit this album is probably his best work since The Golden Age of Grotesque album in (2003) from the start of the album it was typical old style Manson you can tell just by his vocals that he is enjoying his music again. The first song is Hey Cruel World it is full of well-done lyrics, great riffs and keyboards it is typical Manson in your face music that shocks the world.

The next three songs are No Reflection, Pistol Whipped and Overneath The Path Of Misery. All these songs are very good but my favourite out of these three has to be Pistol Whipped it is also my favourite off the whole album it really takes me back when Manson was at his best. The fifth song is Slo-mo-tion it starts off with a good bass run which is then followed by the drums, guitar and keyboards then Manson’s vocals come with the same panache as he always does. It is another good well-done song.

The next Four songs are The Gardener, The Flowers Of Evil, Children Of Cain and Disengaged all these songs are very well done again just as you would expect from Manson it has great riffs, cool keyboards and well put over vocals. The Tenth song on the album is Lay Down Your Goddamn Arms starts off with a great heavy riff then the vocals come in and the tempo goes down a notch but keeping the heavy riff going. This is a really good song the way Manson is putting him self over in this what he used to do back in the day. The next three songs are Murderers Are Getting Prettier Every Day, Born Villain and Breaking The Same Old Ground these songs have more of the same good vocals, heavy riffs and good keyboard work in them that any Manson fan would be happy with. The last song and this is a Bonus song on some editions of the album which is You’re So Vain which is a Carly Simon cover it also has Johnny Depp featuring on lead guitar and on drums. In typical fashion Manson has stamp his own style on this and it really works well. Just like some of his other covers that he has it has been done very well I can see this being on a film soundtrack somewhere in the near future.

Overall
This has been a bit of fresh air from the Manson camp it is definitely been the best album that he has brought out since The Golden Age of Grotesque (2003). If you are a Marilyn Manson fan you will hopefully be very pleased with what he has produced here.

MARILYN MANSON‘s long-awaited new album, “Born Villain”, is available for streaming in its entirety at AOL Music. The CD will be released on May 1 (one day earlier internationally) via Cooking Vinyl and Manson‘s own label Hell, Etc.

In a brand new interview with Billboard.com, Manson was asked if putting out his first CD not affiliated with Interscope was a liberating experience. “Yeah,” he replied. “I’ve always had control over what I created, and in the past once I turned it over to the record label, what happened wasn’t always to my liking. A lot of it was more their stupidity, trying to fit me into a hole I didn’t belong in, and that would of course make you confused about what you’re supposed to be as an artist, not even just as a person. So getting off Interscope gave me the ability to think exactly how you would when you’re starting out.”

Regarding the direction of the new album, Manson said, “With the previous two records, I was making music to make people feel like I was feeling rather than to make them feel something — and I was feeling pretty shitty most of the time, so I don’t think it was a good idea to do that, necessarily. I’m not discrediting the music, [but] my focus was in the wrong place. This record . . . emotionally it brings a different type of attitude that is more the spirit of me and feels interesting and fun for me to do.”

Marilyn Manson‘s new video, “No Reflection”, can be seen below. The clip was directed by Lukas Ettlin, who previously worked with Manson on the award-winning “Personal Jesus” video.

Check out the front and back cover artwork below.

MARILYN MANSON will release his long-awaited new album, “Born Villain”, on May 1 (one day earlier internationally) via Cooking Vinyl and Manson‘s own label Hell, Etc.

The track listing for the CD is as follows:

Check out the front and back cover artwork below.

The album’s first single, “No Reflection”, was premiered on March 7 on the Los Angeles radio station KROQ and was made available exclusively on iTunes on March 13.

“The new record put simply has the ambition and determination of how I started making music in the first place,” Manson says. “It sounds like the first record in that it’s not afraid to do anything. I had to remove myself from my lifestyle and start fresh.”

MARILYN MANSON will release his long-awaited new album, “Born Villain”, on May 1 (one day earlier internationally) via Cooking Vinyl and Manson‘s own label Hell, Etc.

The CD’s first single, “No Reflection”, was premiered on March 7 on the Los Angeles radio station KROQ and will be made available exclusively on iTunes this Tuesday, March 13.

“The new record put simply has the ambition and determination of how I started making music in the first place,” Manson says. “It sounds like the first record in that it’s not afraid to do anything. I had to remove myself from my lifestyle and start fresh.”

In a recent interview with Revolver magazine, Manson stated about his new CD, “It doesn’t really sound like any of my old records. In fact it sort of sounds like what I listened to before I made records — KILLING JOKE, JOY DIVISION, REVOLTING COCKS, BAUHAUS, BIRTHDAY PARTY … It’s very rhythm-driven. It’s actually very bluesy. It’s the first record where I repeat verses. I just sign the words in a different key, the next time. I’ve never done that before, because I’ve always felt like I needed to write a lot of words in the past … I think this will probably be the grandest concept record of all.”

Manson‘s U.S. theater tour is scheduled to kick off April 27. 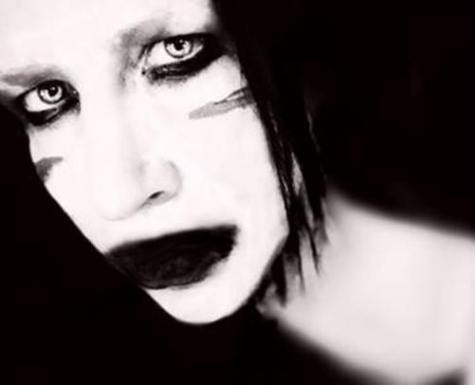