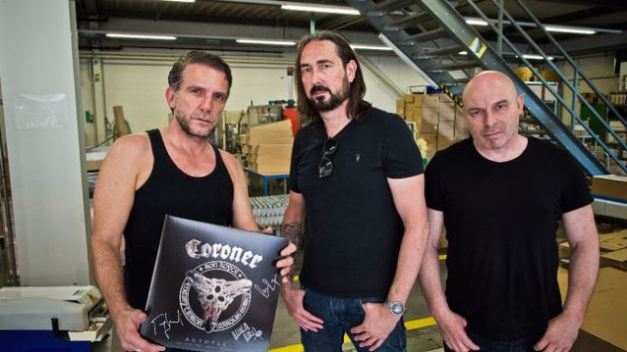 It’s the sensational comeback of the year: Swiss metal pioneers CORONER – in the current line-up of Tommy Vetterli (guitar), Diego Rapacchietti (drums) and Ron Broder (bass/vocals) – are back in the studio! This three-man band made a name for itself in the music scene with its discerning brand of technical thrash metal. Now, 23 long years after the band’s last album release (Grin, 1993), Coroner has announced plans to release a new studio album with Sony Music and Century Media Records.

In the 1990s, CORONER caused a stir in the music industry with its progressive and technically sophisticated music style. All over the world, Coroner was considered one of the most unconventional avant-garde metal bands, which is what attracted the attention of global greats like Metallica. Today, CORONER is a cult band and is highly respected not only by musicians such as Max Cavalera (Sepultura), Franz Treichler (The Young Gods) and Mille Petrozza (Kreator), but also by metal fans all over the world. After the release of their last studio album, Grin, in 1993, Coroner split up. Two years later, their best-of album, Coroner, was released. Sixteen years passed. Then, in 2011, Tommy Vetterli, Ron Broder, and the then drummer and founding member Marky Edelmann returned to the stage, playing a potpourri of numbers from their albums at concerts. Back then, the three musicians were almost certain that they would not be able to find the time for a new studio album. ‘Almost’ being the key word here.

For their seventh studio album, which is due for release in 2017, Coroner have signed a worldwide record deal with Sony Music Switzerland, which has enlisted the help of Century Media Records, a strong partner that will release Coroner records internationally. But for those fans who just can’t wait for the new album, Coroner have a special treat in store: Autopsy will be released on September 23rd, 2016.

Autopsy is a 3 x Blu-ray + LP or a 3 x DVD + CD set that is jam packed with a documentary movie of the band’s history, live recordings, previously unseen interviews and a best-of compilation. The Vinyl + Blu-ray Box, which is limited to 3,000 copies, is a real collector’s item and every copy of the box is signed by the band members themselves (See first photo!).

5th edition of ROCK HARD FESTIVAL ITALY 2014, for Extreme Music Lovers, is fixed for Saturday 13rd December. The fest is dedicated to the homonymous Rock Hard magazine, for its italian issue and it takes place at LIVE MUSIC CLUB in Milano.

The Festival Organizer has made the first band announcements; CORONER as a headliner and first time ever in Italy THE  MONOLITH DEATHCULT. More bands and surprises to be announced soon. 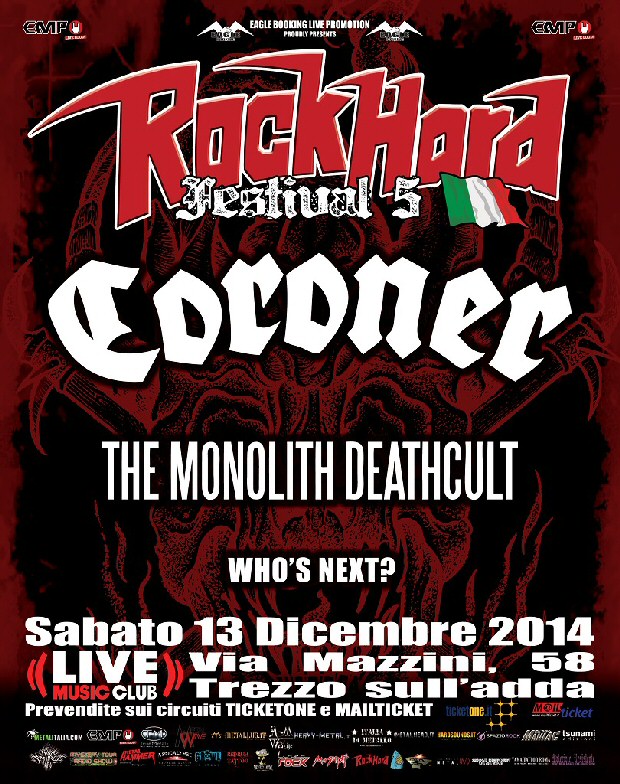 In addition, outside of the venue there is a large area for metal markets, such as stands for media partners’ stalls, lounge rooms, etc.

Meet & Greet with the bands will also take place during the day. 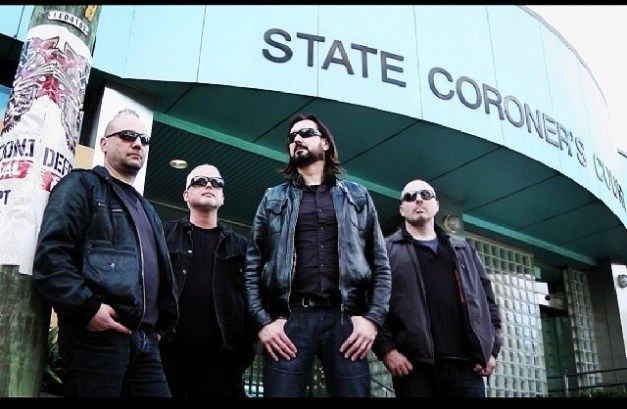 We are very happy to announce the new man on the drums for CORONER: Diego Rapacchietti.

Diego is an accomplished and innovative drummer. He has played in bands PAGANINI, VENTURIA, 69 CHAMBERS, and many more. Diego also has extensive experience as a studio drummer for various projects.

Posted by tarjavirmakari on May 25, 2014
Posted in: News. Tagged: CORONER, Diego Rapacchietti. Leave a comment

We are very happy to announce the new man on the drums for CORONER: Diego Rapacchietti.

Diego is an accomplished and innovative drummer. He has played in bands PAGANINI, VENTURIA, 69 CHAMBERS, and many more. Diego also has extensive experience as a studio drummer for various projects.

May 29th, 2014 (Salzhaus Winterhur, Switzerland) will see the debut appearance of Diego as the new man on the CORONER drum set. That’s just a few days before CORONER’S first Australian tour ever, kicking off on June 5th in Melbourne.

So, a very warm welcome to DIEGO RAPACCHIETTI!

Legendary Swiss visionaries CORONER have announced that they will be parting ways with drummer Marky Edelmann (aka Marquis Marky). His statement reads below:

“Three years ago we started rehearsing together for our reunion tour after a break of 15 years. We thought it was going to be a matter of a few shows. Now, after three years, we have performed 27 shows all over the world! I cannot find the words to describe how much i enjoyed every single gig.

I want to thank every single one of you for coming to the shows and giving us such a fantastic time. It was a great pleasure to perform for you, shake your hands and sometimes have a drink and a chat after the show.

Many thanks to all the promoters that booked us, without you we would still be sitting in our bunker rehearsing. I’m very sorry the shows we had hoped to do in Mexico, South America, Japan and Australia never happened. I was looking forward to those very much…

The following is not easy to say and believe me I have given it a lot of thought.

I will leave Coroner at the end of February this year.

I think we have played more than enough reunion shows and now it’s time to either stop doing reunion shows or to move on with a new album. For me it was clear from the start that I didn’t want to record another album. I love the sound of Coroner but for me it’s the moment to explore new sounds without the weight of the past on my shoulders.

Ron, Tommy and I agreed that Coroner should continue with another drummer. They will announce who it’s going to be on the coroner-reunion page.

With all my heart I wish ’em all the best for the future. We will be brothers forever. I will continue with a new band that you will hear about in the near future.

So thank you all once more and I hope we are gonna see you very soon!”

No Remorse Records will release the Death Cult demo from technical thrash metal masters Coroner on CD and limited vinyl edition. This will be the first official re-release of Death Cult, that was originally recorded and released in 1986 only for 250 tapes. Vocals on Death Cult are performed by CELTIC FROST legend Tom G. Warrior. Release date is scheduled for December and it will also include additional bonus material.