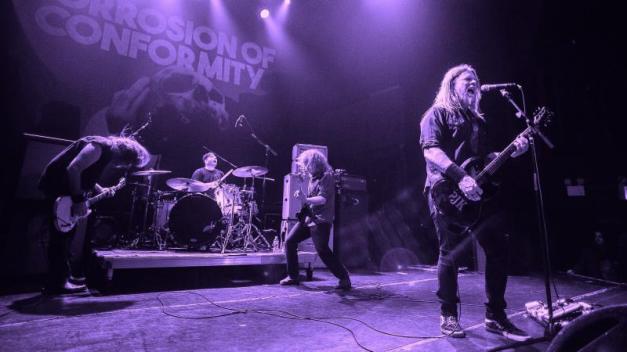 CORROSION OF CONFORMITY are pleased to announce that some of their previously planned 2020 UK/EU tour dates that had been halted due to the spread of Covid-19, have been rescheduled to take place in spring 2021, alongside some new dates. C.O.C will be hitting our shores in April and May 2021, with support due to come from Arizona’s SPIRIT ADRIFT.

Tickets are on sale now via the below links:

Order their latest album »No Cross No Crown« now: nuclearblast.com/coc-nocrossnocrown

CORROSION OF CONFORMITY To Kick Off US Headlining Tour With THE SKULL, MOTHERSHIP And WITCH MOUNTAIN

CORROSION OF CONFORMITY will kick off the next leg of their A Quest To Believe, A Call To The Void North American live takeover this week. Support will be provided by The Skull, Mothership and Witch Mountain. The trek begins September 21st at Heavy Mountain 2 Music And Beer Fest in Asheville, North Carolina and winds its way through over a dozen more cities, concluding October 11th in Pomona, California. Later that month, the band will appear on the inaugural MegaCruise alongside Megadeth, Anthrax, Testament, Overkill, and so many others. The latest tour follows the band’s summer run with Crowbar, Lo-Pan and Quaker City Night Hawks. See all confirmed dates below.

CORROSION OF CONFORMITY‘s latest full-length, No Cross No Crown, was released early last year via Nuclear Blast Entertainment. Recorded with longtime producer John Custer, the record marks the first studio recording with vocalist/guitarist Pepper Keenan in over a decade and, earning the #67 spot on the Billboard Top 200 Chart, #12 on the Billboard Top Current Albums Chart, and #3 on the Top Hard Music Albums Chart upon its first week of release, is the highest charting album of the band’s career.

No Cross No Crown is available on CD, digital, vinyl, and cassette formats. Various order bundles are available at nuclearblast.com/coc-nocrossnocrown. View the band’s video for “The Luddite” HERE as well and the animated clip for “Wolf Named Crow” HERE.
In related news, CORROSION OF CONFORMITY was recently given the honorable task of dispersing a deceased mega fan’s ashes. Relays the band, “So occasionally crazy things happen. We were in Sauget, Illinois, and a couple of dudes complimented us on the show and making small talk when they pulled out a plastic bag of powder, which turned out to be the ashes of one of the dudes’ stepfather, who apparently was a fan. They requested that Gary’s remains come on tour with us. We said that we were honored, but since we didn’t know Gary, that we might not be up to the responsibility of properly dispersing even a portion of his final remains. Reluctantly they took the bag back, but later threw it in the nose of our trailer, where we discovered it a few days later. So, we put Gary’s ashes in a cup holder up in front of the bus and he rode up there for a couple of thousand miles. The crew had a few drinks with Gary as well. With the tour winding down that week, we took Gary to the ocean at Virginia Beach, and watched the tide take his last remains away. Fly on, Gary.”
Read the detailed account on the band’s Facebook page at THIS LOCATION.

Jimmy Kay from Canada’s The Metal Voice spoke to guitarist of Corrosion of Conformity Woody Weatherman at this years Heavy Montreal festival 2019.

Weatherman spoke about touring with Zakk Wylde, plans for the next album and the upcoming Megacruise.

When asked about touring with Zakk Wylde
“Zakk is a jokester, which is cool, he also does play guitar (laughs). We kept on asking him to give us a lick of the day and he would show us something, Pepper and I don’t know what we are doing (laughs). One thing I can say about him is he will joke around all day but when it comes time to go on stage to play his guitar, he is on it, no messing around.”

When asked about an update to any potential new album
“No Cross No crown has been out a year and a half and we are still on the road but we are starting to ponder about the next one. Nothing recorded really but there is always riffs. The last record we didn’t have anything really before we went into the studio and we wrote it and recorded it as we went along and we may kind of adopt that approach again. You go in the morning there is nothing then you leave at the end of the day and there is something. Musically we always like to do something different but we are not going to come out and be the Jonas Brothers.”

With their Success of their Queen cover are they planning on doing more cover songs
“That is the topic of discussion at the moment, I don’t know about a whole album, but we have been tossing around some ideas. We had a great time doing that Queen song.”

CORROSION OF CONFORMITY celebrated the return of frontman Pepper Keenan with the release of their latest studio album »No Cross No Crown«, on January 12, 2018 (Nuclear Blast). Since then the group has been touring around the globe relentlessly, and now the band is set to return to European shores in June & July 2019 – roughly a year after their last visit. On the forthcoming trek, the quartet will not focus on their latest offering but on songs from their classic record »Deliverance«, which saw the light of day 25 years ago, and was their first studio album featuring Pepper Keenan as frontman. A few select festival appearances will round off C.O.C.’s journey across the continent. All dates can be found below, tickets are on sale now! 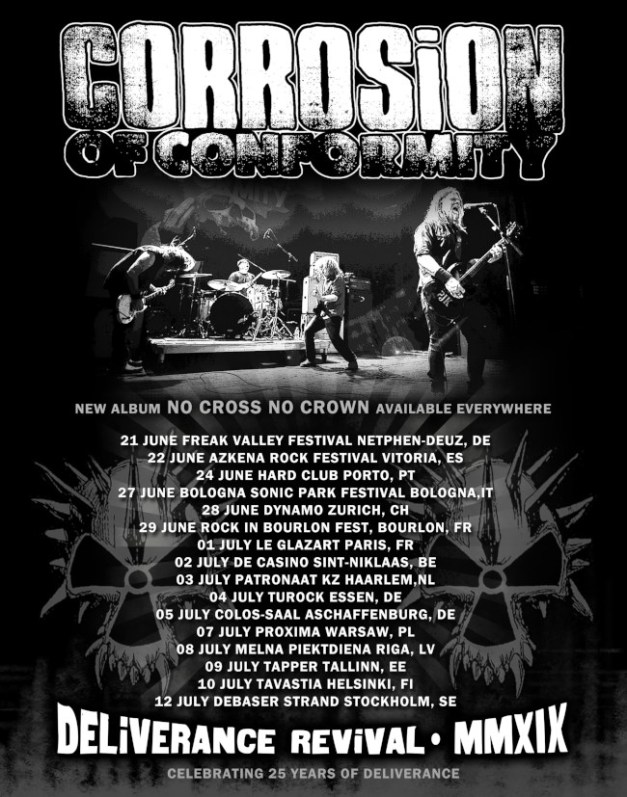 Posted by tarjavirmakari on January 23, 2018
Posted in: Int. News. Tagged: "No Cross No Crown", CORROSION OF CONFORMITY. Leave a comment

CORROSION OF CONFORMITY‘s long anticipated No Cross No Crown full-length, released on January 12th via Nuclear Blast Entertainment, toppled Billboard charts upon its first week of release earning #67 on the Billboard Top 200 Chart, #12 on the Billboard Top Current Albums Chart, and #3 on the Top Hard Music Albums Chart making it the highest charting album of the band’s career!

“To all the free thinkers and beer drinkers, we couldn’t do this without you,” issues the band. “Thanks so much for your undying support and loyalty all these years. Up the hammers! See you on the horizon. Love and respect – CORROSION OF CONFORMITY.”

Captured in North Carolina with longtime producer John Custer, No Cross No Crown marks the first studio recording with vocalist/guitarist Pepper Keenan in over a decade and has reaped critical accolades from fans and critics alike both stateside and abroad.

No Cross No Crown is available on CD, digital, vinyl, and cassette formats. Various order bundles are available at nuclearblast.com/coc-nocrossnocrown.

If you missed it, check out the band’s recently-released new video for “The Luddite” HERE as well as their animated clip for “Wolf Named Crow” HERE.

CORROSION OF CONFORMITY is currently in the midst of a massive North American live excursion supporting Black Label Society. The tour commenced in Denver, Colorado December 27th and will make its way through nearly four dozen cities upon its conclusion on February 27th in Los Angeles, California. Additional support is being provided by Eyehategod and Red Fang on select shows. See all confirmed dates below.

Posted by tarjavirmakari on November 11, 2017
Posted in: Int. News. Tagged: "No Cross No Crown", 'Cast The First Stone', CORROSION OF CONFORMITY. Leave a comment

Whenever CORROSION OF CONFORMITY releases a new album, folks take notice. But their latest is a true event. It’s been a dozen years since CORROSION OF CONFORMITY recorded new material with vocalist/guitarist Pepper Keenan at the helm. In that time, there have been rumors, whispers, and outright allegations that the legendary Southern rock outfit would reunite to blow the doors off the whole damn scene again. In 2014, after nearly a straight decade traversing the globe as a guitarist with New Orleans supergroup DOWN, Keenan reconnected with the core CORROSION OF CONFORMITY trio of Woody Weatherman, Mike Dean, and Reed Mullin to hit the road hard. “Reed called me and mentioned maybe playing a couple shows,” Keenan recalls. “I said, ‘Let’s just go to Europe and see if it works.’ So we went to Europe and then ended up going back four times in one year… We toured for a year and then started tracking about ten or eleven months ago.”

And now, the long wait is over. CORROSION OF CONFORMITY returns with “No Cross No Crown”, set to be released on January 12th via Nuclear Blast Entertainment! “No Cross No Crown” is an album that somehow sounds as though no time has passed between 2005’s “In The Arms Of God” and today. As well as launching pre-orders today, the band are also premiering the first track from the forthcoming release. Listen to ‘Cast The First Stone’, here:

Recording in North Carolina with longtime producer John Custer, CORROSION OF CONFORMITY cut »No Cross No Crown« in about forty days over the course of a year. “We took our time and didn’t put any pressure on ourselves,” Keenan says. “I’d go up from New Orleans and we’d do four or five days at a time, just hacking away at it. It was fun because we did it like a demo, but in a studio. We were writing and putting it on tape at the same time. We took what parts we thought were great from the old days and weren’t scared to go backwards. It kinda wrote itself that way.”

Some of these new jams sound like could’ve easily been on »Wiseblood« or »Deliverance«, two of CORROSION OF CONFORMITY‘s most revered records. On »No Cross No Crown«, beefy Southern stompers like ‘The Luddite,’ ‘Little Man,’ and ‘Forgive Me’ are interspersed with melancholy guitar interludes like ‘No Cross,’ ‘Matre’s Diem,’ and ‘Sacred Isolation’ – just like SABBATH used to do in the ’70s. “We started doing that on »Deliverance«,” Keenan points out. “My theory on that is that if you’re trying to make a record flow, you need to break it up a little. When you need a breather, write an interlude. I like writing those mellow pieces just to space things out and make the next thing come in heavier.”

The album’s iconic title comes from a recent tour stop in England. “We were playing this old church from like the 1500s that had been turned into a performing arts center,” Keenan recalls. “The dressing room had stained glass windows and one of them showed this poor fella being persecuted. Underneath it said, ‘No cross no crown.’ So I just took that idea. We’re not trying to be on a soapbox, but we used it as a catalyst to write songs around.”

Which is to say that »No Cross No Crown« has a lot less to do with politics or religion than its title implies. “I think everyone needs to get away from that mindset in general,” Keenan offers. “It just seems to be a mess out there nowadays. We need to get back to being humans and taking care of each other and simple things like that. For us, the terminology ‘No cross no crown’ is a theme. It’s mentioned in like three songs throughout the album. We just weaved it through as we went.”

»No Cross No Crown« – Track Listing:

In advance of the release of »No Cross No Crown«, CORROSION OF CONFORMITY will join BLACK LABEL SOCIETY for a mammoth North American live takeover. The tour begins December 27th, 2017 in Denver, Colorado and will wind its way through nearly four dozen cities, the journey coming to a close February 27th, 2018. Additional support will be provided by EYEHATEGOD and RED FANG on select shows. See all confirmed dates below.