Blabbermouth reports that According to the web site of the Sarasota County Sheriff’s Office, CRIMSON GLORY guitarist Jon Drenning was arrested on April 8 in Sarasota, Florida on charges of conspiracy to purchase cocaine (Schedule II substance) and use of a two-way communication device to facilitate a felony. He was released the following day after posting $10,000 bail on each charge. 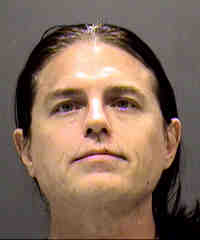 Drenning will be arraigned on May 9.

Singer Todd La Torre quit CRIMSON GLORY in February 2013, explaining in a statement that “the main reason for my resignation from CRIMSON GLORY is primarily due to its inertia status.”

La Torre, who joined QUEENSRŸCHE in June 2012 as the replacement for Geoff Tate, became an official member of CRIMSON GLORY in April 2010 and played a number of shows with the band during the subsequent two years.

A “raw” version of a new CRIMSON GLORY demo track entitled “Garden Of Shadows” was released in September 2012 and was supposed to appear on the band’s new concept record.

Midnight passed away in 2009 due to long-term health complications.

Roadrunner Spotify Playlist: Back To The ’80s

Roadrunner Records has issued as follows:

This week’s Spotify playlist is a return to the ’80s – just like we hope the temperatures in New York City will be next week…it’s been hot as Hell here. Anyway, kick off your weekend with a dozen classic tracks from Carnivore, Crimson Glory, King Diamond, Mercyful Fate, Obituary, Pestilence, Sepultura, Tokyo Blade, Toxik, Whiplash, Witch Cross, and Znöwhite! Enjoy!

Since parting ways back in June, vocalist Geoff Tate has been referred to as the former singer of QUEENSRŸCHE while his ex-bandmates have forged on with the name and CRIMSON GLORY frontman Todd La Torre in Tate’s place. The courts have allowed both entities to tour under the Queensrÿche moniker with Tate announcing in September that his line-up would include the following pillars of heavy metal: bassist Rudy Sarzo (ANIMETAL USA, ex-WHITESNAKE), drummer Bobby Blotzer (RATT) and guitarists Glen Drover (ex-MEGADETH), Kelly Gray (ex-Queensrÿche). 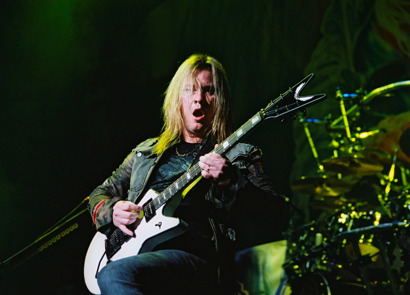 However BraveWords has just received the following note from Glen Drover saying that he’s bowing out of the band:

“I am really sorry to say that I have decided to bow out of Geoff Tate’s Queensrÿche. I was very excited about doing this gig initially, but learned in the past week or so that it’s in my best interest not to do this right now. I feel really bad for those who were excited about the idea, and to Geoff himself, who I have to say was very nice to me on my past trip to Seattle. I of course am very disappointed for arriving at this point, and making this decision, to say the least. I sincerely wish the Geoff and the band all the luck on what they do in the future.”

Just a few weeks ago BraveWords spoke to Tate (here) about his new solo album Kings & Thieves, the Queensrÿche drama and his plans for 2013 amidst all the legalities. He had the following kind words to say about Glen Drover:

“Well I chose specifically because I’m a fan of that guy’s guitar playing. He just really has this really fluid effortless style of playing. And he’s the kind of guy that can play anything you throw at him. He’s very schooled and very disciplined. Personality-wise, he just has a really easy going personality. He’s not difficult.”

Back stateside from a successful Scandinavian and Northern European tour, CRIMSON GLORY have settled in to finish writing and recording their new album, a concept record tentatively slated for release next year. With their last leg of their 25th Anniversary Tour behind them, the band has released an early raw demo track entitled ‘Garden Of Shadows’ as a sample of things to come. 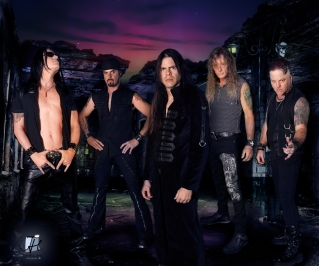 “Obviously there will be many unique elements and dynamics to our new record,” states the band. “Moments of light and beauty, times of darkness, pain and sorrow; soaring, epic vocal melodies, fiercely intense dueling guitar riffs and lead harmonies, along with driving, melodic bass lines that are the very foundation of much of our music… songs with real passion, emotion and melodies that can withstand the test of time; everything our fans have grown to admire and respect about our classic songs will be there.”

“We chose ‘Garden Of Shadows’ as a teaser track for our fans because it was the very first song we had written/demo’d with Todd (La Torre/vocals) almost a year and a half ago, before he was an official member of the band,” says lead guitarist Jon Drenning. “We wanted to see what he could do musically and lyrically on his own. What you hear is exactly what Todd recorded at home without any input from anyone in the band. Indeed, this track helped seal the deal with Todd for us, because we wanted more than just a voice — we needed a creative writing force as well, someone who understood our particular style and sound of music and the legacy that accompanies it.”

Drenning adds: “Of course we have much more new material that we have been working on since the writing of this particular song, which will undoubtedly go through additional changes regarding individual parts, song arrangement, etc. as we progress further into production and the final recording. To be truthful, the compositions that come before and after this one are just as important to understanding the song itself, but we thought since it was the first song we had composed with Todd, it should also be the first new song shared with our fans around the world. This is just one example of where we started and what we have been working on, and we want to take our fans on the journey with us, from beginning to end.”

Go to Crimson Glory’s official Facebook page here for updates and information on the new album.

“We are all behind Todd 100% on this. He is a brilliant, eloquent and incredibly skilled vocalist; that’s why we were so happy to have him onboard with CRIMSON GLORY in the first place. It was only a matter of time before word got around and his performances were seen by the right people, that everyone would know who Todd La Torre was.

“QUEENSRŸCHE is another great example of how a band can create a legacy that is endless; we’re proud to stand with them against the test of time as some of the original pioneers of progressive metal here in the U.S.

“Since we share so many of the same fans, we truly see this as a great opportunity not just for Todd, but for the fans as well.

“CRIMSON GLORY has always had a very devout following of fans, but QUEENSRŸCHE has obviously had a more far-reaching effect on the mainstream metal movement, and so we see this as a great opportunity for many of their fans to get to know our music better. Above all, Todd has been a fan of QUEENSRŸCHE for so long, and for him to have the chance to be a part of their next chapter (as RISING WEST) is a dream come true for him, and for us as as his friends as well. When he came to us with this, we supported him and encouraged him to go for it. The world deserves to have as much Todd as it can handle!

“Of course, Todd is still the singer for CRIMSON GLORY, he is a part of our family and that will never change. We are still writing the new record and we will be adding more tour dates later this year.”

RISING WEST will make its live debut on Friday, June 8 and Saturday, June 9 at the Hard Rock Café in Seattle, Washington. The band will perform rare and classic hits from the first five QUEENSRŸCHE albums — from the 1983 EP through 1990’s “Empire” — and plans on hitting the studio sometime early summer to begin recording its first release.

A seven-minute YouTube clip containing samples of Todd La Torre performing a number of QUEENSRŸCHE classics can be found below. Also available is Todd‘s full-length performance of the song “Queen Of The Reich”.

La Torre, who says that QUEENSRŸCHE has been his favorite band since he was 15 years old, first met Wilton at this year’s NAMM convention in January in Anaheim, California.

“Just for the record and for those asking about CRIMSON GLORY, I am NOT leaving CRIMSON GLORY, I am embarking on another musical endeavor with the members of QUEENSRŸCHE,” Todd wrote in an online posting. “I am proud and honored to be a part of this! CRIMSON GLORY is still writing new material for our record, DO NOT WORRY This is going to be an amazing new chapter.”

He added, “The media and ‘fans’ can be quite brutal, but I would like to say thank you for all of your amazing support.

“I have nothing but respect for what Geoff Tate has done to the genre. His voice is still amazing. The only thing that is constant is change. I hope the fans of QUEENSRŸCHE, and I’m one of them, will continue to show respect for him and all he has accomplished.”

In addition, Crimson Glory will play the Jalometalli Festival, which takes place on August 10th and 11th in Oulu, Finland. Other bands on the bill include ICED EARTH, DEICIDE, MUNICIPAL WASTE, CORONER and HEATHEN. Go to this location for ticket information and updates.

“Listening to our full concert from Bang Your Head Festival 2011 for the first time. Sounds great! We are working on getting all of the footage from this show to release our own full live DVD of this concert. If you thought last year was big for CG, 2012 is going to be even better.”