US death metal legends DEICIDE have just announced their spring North American headline tour. The band will hit the road starting May 11th in Austin, TX to June 1st in New York City and will be making stops in major markets like Los Angeles, Seattle, Chicago, and more. Deicide will be joined by Origin, Jungle Rot, and The Absence as support.

Deicide is also proud to announce their newest, permanent addition to the line-up, guitarist and longtime friend Chris Cannella. Glen Benton states: “We’re looking forward to getting out there with our new line up and bringing the new offerings of blasphemy to the people….”

The band will be hitting the road in support of their fall 2018 release, Overtures Of Blasphemy, which was produced by Jason Suecof (Whitechapel, August Burns Red, Chelsea Grin) and Audio Hammer Studios. Overtures Of Blasphemy shows the band in top form. This is real US death metal: fast, blasphemous and evil. The album is available as CD, LP (with 180 gram vinyl), and digitally. Get the album on the format of your choice HERE!

Posted by tarjavirmakari on September 17, 2018
Posted in: Int. News. Tagged: “Defying The Sacred”, “Overtures Of Blasphemy”, Deicide. Leave a comment

US death metal legend DEICIDE have released a video for the song “Defying The Sacred”, taken from their brand-new album “Overtures Of Blasphemy”. Watch the video here:

“Overtures Of Blasphemy” shows the band in top form. This is real US death metal: fast, blasphemous and evil. The album is available as regular CD, LP (with 180 gram vinyl), limited box set (with CD, sticker set, woven patch and metal pendant) and digitally. Get the album on the format of your choice here.

The LP version is available in the following vinyl colours: 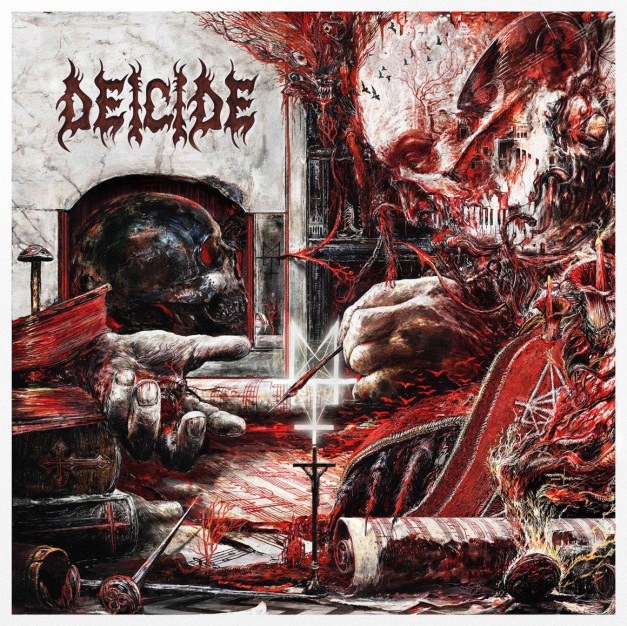 METALHEADS FOREVER, one of the biggest metal entities out there (having today more than 158k members, led by David Maloney) and Alpha Omega’s partner since February 2018, have posted online their September 2018 issue, featured by Alpha Omega’s BILL HUDSON‘s NORTHTALE alongside DEICIDE, KRISIUN, ABORTED, OMNIUM GATHERUM interviews, and many more!

Read the BILL HUDSON’s NORTHTALE interview at this location.

To read all the interviews and the whole METALHEADS FOREVER September 2018 issue, go here: http://www.mhf-mag.com and get more information here: https://www.facebook.com/groups/MetalOnLoud

DEICIDE: Brand-New Track “Seal The Tomb Below”, “Overtures Of Blasphemy” Out September 14th

Posted by tarjavirmakari on August 10, 2018
Posted in: Int. News. Tagged: “Overtures Of Blasphemy”, “Seal The Tomb Below”, Deicide. Leave a comment

Death Metal icons, DEICIDE, has returned with Overtures Of Blasphemy, which sees the band return to their roots to create a stellar and uncompromising extreme metal masterpiece! The effort was produced by the world-renowned Jason Suecof at Audio Hammer Studios and will be released through Century Media world-wide on Sept 14th. Click below to check out the crushing new track, “Seal The Tomb Below”, below:

One With Satan
Crawled From The Shadows
Seal The Tomb Below
Compliments Of Christ
All That Is Evil
Excommunicated
Anointed In Blood
Crucified Soul Of Salvation
Defying The Sacred
Consumed By Hatred
Flesh, Power, Dominion
Destined To Blasphemy

After 30 years, it’s plausible to think DEICIDE would want to slow down and soften the message. None of that is happening on new album Overtures of Blasphemy. In fact, Deicide, with head demon Glen Benton and co-conspirator Steve Asheim at the helm, are only becoming darker, heavier, and more extreme. “I originally thought that the older I got the more mellow I’d get,” says Benton. “That’s not the case. I would say I’m darker now than I ever was. What I’ve been through over the years has definitely darkened my heart and soul.”

Lyrically, Overtures of Blasphemy continues Deicide’s crusade against, not just Christianity, but all religions. Benton says the lyrics also dig deep into my own personal darkness. Benton says. “It’s what I am. Death metal is what I do.”

DEICIDE’s new album “Overtures Of Blasphemy” will be released on September 14th, 2018 via Century Media Records. Today you can listen to the first single track of the album. Check out the lyric video for “Excommunicated” here:

And that’s not the only good news today! You can pre-order “Overtures Of Blasphemy” as of now: https://deicide.lnk.to/OverturesOfBlasphemy

The album is available in the following formats:

The LP version is available in these vinyl colours:

Death Metal icons DEICIDE announce the release of their 12th studio album, “Overtures Of Blasphemy”, their first album after 2013’s critically acclaimed “In The Minds Of Evil”.

“Overtures Of Blasphemy” was produced by Jason Suecof (The Black Dahlia Murder, Trivium) at Audio Hammer Studios and comes with a brilliant artwork by Zbigniew Bielak (Watain, Ghost, Paradise Lost).

The album will be released through Century Media Records worldwide on September 14th, 2018.

Benton states: “This album came together over time, meaning we didn’t want to rush it. A few  people might remember an interview where Steve Asheim  (original member, drummer/songwriter) said ‘the material is  done, but it’s just not there yet.’ Well, that was the  jumping off point of when this album truly started taking  shape and the songs became what they are now…complete,  compact and effective. As the band pushed forward, so did  the writing process and a few other processes which made the  record and the band stronger. The result is Overtures Of  Blasphemy, perhaps the group’s strongest release to date. Jason Suecoff lended his considerable talents and attention to detail in making the  tracking of the songs as great as they can be and the final  mix as sonically brutal, yet as listenable as possible. An arduous process, but one well worth the time and effort.”

Cover artist Zbigniew Bielak comments on his artwork for “Overtures Of Blasphemy”:“If you experienced the death metal boom of the early 90s first hand, you know why Deicide’s flaming logo was the ultimate threat in the sanity department. Working with Glen Benton was a great honor and a throwback to the time, when death metal aesthetics were at their vilest. Satan Spawn the Caco Deamon is alive and well.”