Swedish Death Metallers DESOLATOR are proud to finally unveil the music video for “Creatures of Habit”, taken from their debut album ‘Sermon Of Apathy’!

A lot of work went into the making of this video, and the band would like to thank everyone involved in the making of it. Special thanks to the guys at NRDFLX Visuals who really went the extra mile in helping the band realising their vision! Check out the video below.

Stockholm death metal force DESOLATOR have unleashed a new track, “The Great Law of the Dead”, from the upcoming album, Sermon of Apathy. The Swedish quartet invited Nile’s Karl Sanders to guest on this track.

Desolator comments:
“‘The Great Law of the Dead’ is the album’s closing track, an almost nine-minute dive into Lovecraftian horror, featuring an awesome guest solo by Nile’s Karl Sanders. It’s one of Desolator’s most ambitious tracks so far, and it’s an honor to have one of our musical idols play on it.”

The single is available on digital platforms, order it HERE.

The embers of Swedish death metal are stoked white hot on Sermon of Apathy, the sophomore release of the arisen beast known as DESOLATOR. Though the Stockholm influence so prevalent on earlier releases by the band is now but one ingredient in the burly concoction presented here, the band still remains rooted in that sound of their forefathers. Adding hearty helpings of dissonant and creative riffing influenced by the likes of Immolation and Morbid Angel, the quartet up the ante on nasty. Sermon of Apathy is a fully evolved death metal monster, with creative drumming, thunderous bass, vicious, yet melodic riffs, and obliterating growls of rage. The full package is even greater than this suggests though, as Desolator have achieved a totally mastery of composition and pitch perfect production.

“Portal Tomb” is the first single and opening track from the upcoming Desolator album “Sermon of Apathy”. This will show you exactly what the band is about – monolithic death metal that’s equally intense and atmospheric in its approach. Video by BCzar Concepts.

The music style has one foot in U.S. death metal like Immolation and Morbid Angel, and the other in Swedish old school values. It’s the next logical step after hailed 2016 EP “Spawn of Misanthropy”. If you liked that one, you will love this.

“Portal Tomb” is just the first taste, “Sermon of Apathy” is out on September 4th on Black Lion Records!

Posted by tarjavirmakari on May 11, 2020
Posted in: Int. News, News. Tagged: "Sermon of Apathy", Desolator. Leave a comment

“Sermon of Apathy”, the brand-new DESOLATOR album will be out on September 4th, via Black Lion Records, featuring seven tracks of monolithic, pummelling death metal.

Desolator have been treading the hallowed ground of the Swedish death metal scene since 2009. Through an early demo (Gravefeast, 2010), a split (Dark Revival/Mass Human Pyre, 2011), and especially the triumphant Unearthly Monument full length in 2013, the quartet paid proper homage to the buzzsaw sound of the Stockholm masters of yore. Having conquered the saw, the band chose to start to move in another direction with their 2016 EP Spawn of Misanthropy. The four tracks begin to show a move away from the Stockholm sound with the addition of more dissonance and creative riffing akin to the work of early Morbid Angel and Immolation. Black Lion Records saw the promise of this sound in embryo, signing the band and re-releasing Spawn of Misanthropy on CD in 2018.

Make no mistake, Desolator are Swedish death metal still. Sermon of Apathy, the latest effort by the band, shows plenty of teeth still. The buzzsaw may be buried a bit, the teeth not as obvious, but the saw still spins. On Sermon, the idea that Desolator began to birth in 2016 comes to full fruition. For you see, Sermon of Apathy is a Frankenstein’s monster of death metal, fully sentient and fully functioning. The aggression of the Stockholm sound is tempered with creative and dissonant riffing reminiscent of the above named US death metal masters. This album does a masterful job of saluting key death metal styles of the past, while drawing from those styles to create their own unique path.

More specifically, Desolator pair varied and vibrant drumming with explosively creative bass to create a foundation simultaneous solid as bedrock and as shifting as the sands of the Sahara. At no point is there any hint that the rhythm is off, but there are many points where the listener is made to feel deliciously off kilter. From double bass to blasting to syncopation to near tribal toms speak to the scope of the drumming. Atop this plateau of power, riffs swirl and dive, some traditional OSDM and others seemingly from another universe entirely. All are made to fit into the dark tapestry being woven, with nary a thread out of place. The distinctive growls give a further edge to the album, providing another layer of abrasion, often in direct contrast to the more melodic riffing.

Sermon of Apathy is a slow burning fire. The seven tracks build on each other, each fanning the flames of the next track, until they leap high and the embers glow white hot. The album is such an engaging listen, the conflagration is upon you before you realize it. Forged in the crucible of death metal past and present, Sermon of Apathy is pure elemental metal of death, made to stand the test of time, igniting listeners in this generation and beyond.

Sermon of Apathy is a feast for fans of classic U.S. bands like Immolation and Morbid Angel, but there are also traces of good old catchy Swedish death metal. Desolator hasn’t forgotten about the old school riffing!

Mixing and mastering has been handled by metal audio aficionado Jari Lindholm. Fittingly, the music is accompanied by gruesome, dystopian artwork by well-regarded death metal artist Alex Tartsus. If that wasn’t enough, here’s the ultimate icing on the cake: an epic guest solo by Nile legend Karl Sanders.

“Sermon of Apathy” is the ultimate statement from this Swedish quartet, being both aggressive, epic, atmospheric and plain catchy. Death metal fans – mark September 4th in your calendars!

Expect a piece of old school death metal with both American and Swedish influences.

It will be out in the fall of 2020. So, what can you expect? Well, a continuation of the more epic sound found on the “Spawn of Misanthropy” EP, this time with improved musicianship and production, as well as an overall more ambitious sound. Bigger, better, more vicious!

It’s a feast for fans of bands like Immolation and Morbid Angel, but there are also traces of good old catchy Swedish death metal. We haven’t forgotten about hooks and riffs. By the way, Karl Sanders of Nile performs a guest solo on the epic closing track; dream come true for us. This is where we take Desolator to next level! 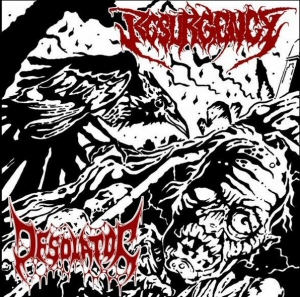 BIO:
Resurgency, originating from Athens, was founded in August 2009 By Tolis B .(Necrovorous, Traced, Ex-Inveracity, ex-Mortal Torment), George K. (Stagnate) ,  Mechblastess (Devathorn, Chthonian Alchemy),  John P. (Stagnate) and George N. (Stagnate) destined to play music under the same truth and reality, aspect . The line up has changed and Vangelis F. (Necrovorous, Embrace of Thorns) joined the band as a new drummer what resulted in recording the first Resurgency demo , entitled “Dark Revival” in July 2010 .The purpose of the band Is to reach the lost chaotic realms of darkness and resurrect the past and the forgotten… http://www.myspace.com/Resurgency

BIO:
The initially unnamed Desolator was formed in early 2009 when Joakim, Jonas and Mille started jamming inSollentuna, Stockholm. After a few rehearsals Stefan joined in . The project was originally going in a Doom/Death Direction but changed into an oldschool Death Metal band after some full band rehearsals. After many long and hard considerations, the name Desolator was approved. The band played its first gig October 16th 2009 at China Station, Haninge.
http://www.myspace.com/desolatorswe