Spawned out of the wastelands of dubstep and industrial metal, this hyper-aggressive collaboration between DINO CAZARES (Fear Factory) and KAOSIS is set to unapologetically divide the global metal audience. Love them or hate them, Kaosis have arrived.

KAOSIS recently signed a deal with ATYPEEK MUSIC in France. Released on the 15/04/19, the single “Hitech – Lowlife” conjures up images of James Cameron Terminators battling in a war-torn futuristic soundscape but the inspiration for the track is far more human. The collaboration between CAZARES and KAOSIS was fluid and was completed over several file sharing sessions. «DINO was sent the basic drum progressions and a week later we had these heavier than god guitar tracks. The collaborator’s vision for Hitech – Lowlife was intuitively synergetic» – VIVIVI (Guitar/ Synth).

The accompanying music video was directed by XEN and features CAZARES appearing as a hologram against the backdrop of an 80s sci-fi throwback theme. Ending with an unexpected plot twist, the narrative of the music video features an isolated person seeking violent refuge in a virtual reality of torture, violence and rape.

«I think most people will take this video the wrong way. There are positive questions being raised in the narrative». – XEN (vocals)

«Our sound is about breaking down barriers; not re-enforcing stale stereotypes. Atypeek 100% supports our bold new vision for metal and that means a lot to us and our fans» – DVOID (Drums/ Percussion)

XEN (KAOSIS VOCAL) said:
«This song is about our fans. Our kids are the next gen of metalheads. Heavy riddim, neuro-funk and djent are sonically very similar. For our fans, there is no distinction»

KAOSIS are touring NEW ZEALAND and AUSTRALIA from May through July and will be heading to EUROPE in August/ September.

Interview With DINO CAZARES: “I see the metal scene growing and I hope it stays there”

Industrial metallers FEAR FACTORY have long been a force to be reckoned with, being pioneers of this genre of metal music and still going strong after 25 years.

The two linchpins of the band are vocalist Burton C. Bell and guitarist Dino Cazares and as with most bands they have seen some line up changes over the years.

But that doesn’t stop FEAR FACTORY and they are set to release their ninth album “Genexus” on 7th August via Nuclear Blast Records. I recently caught up with Dino on the phone in Slovakia whilst on tour, to discuss the new album. Unfortunately the phone connection was a little unstable at times, so you may miss one or two of Dino‘s words, but luckily most of the conversation is audible. You can read a few excerpts from our chat below and the full interview on the audio player. 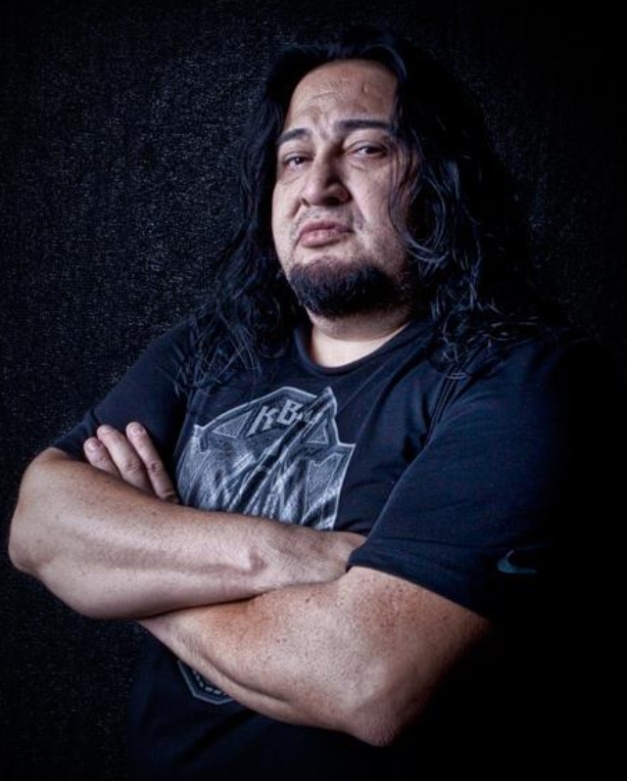 “It’s a concept record about the singularity process, of when man and machine become one. Where nano technology is taking over and we’d be able to create cells that will be able to create humans and also make them extremely intelligent – being able to download  information. That’s where the song ‘Soul Hacker’ comes in, ‘cos you’re able to basically feel somebodies memories and souls and consciousness and be able to transfer into another person. And it’s just the evolution of where human technology is going and moving towards. Futurists are predicting that within the next thirty to forty years that’s where we’ll be and that’s kind of what the record’s about.”

Regarding the band Dino had the following to say:

“We’re very happy with these two guys and we hope that they stick around. You know, it’s mine and Burton’s band, so musicians are going to come and go. Some people have to leave for personal reasons, some people – because maybe it’s time for them to leave.”

“The metal scene has definitely changed – I think in some ways it’s gone new places and in some ways it has gone back to old school. There are so many new school bands that have taken what what everybody did in the past and kind of repeated it. Certain bands are pushing the way forward for other bands as well, just combining different styles of music. But I do see the metal scene growing and I hope it stays there, I hope it gets bigger and I hope that everybody will have successful careers.”

With the fifth instalment of the Terminator franchise, ‘Terminator Genisys’, in cinemas right now, and a returning Arnie stepping back into his most iconic role, Metal Hammer decided to send FEAR FACTORY guitarist Dino Cazares, a man who has got an opinion or two on dystopian futures himself, along to give his thoughts on one of the biggest movie events of the year…

“From day one that first Terminator movie has been a big inspiration to us in Fear Factory. The whole Skynet, rise of the machines story is something that we’ve toyed with in different ways as a band. The franchise is now something like 30+ years old, and this movie goes back to the first one – which is really kinda cool.

The story goes that Kyle Reese is sent back in time to protect Sarah Connor (as in the first one) but this is more like Back To The Future II, it’s about alternate timelines and the things you have to do to change past events. The plot is very interesting and well thought out. It shows how they were able to go back in the first movie and change the course of time, you see them build the time machine and how this changes so many of the strands in the timeline.

I was a little disappointed by the acting, I thought they could have picked a better cast. The guy who plays Kyle Reece (Jai Courtney) is not as good as the original guy. I thought the concept of bringing Arnold back was great, he plays a Terminator but because the skin on his exoskeleton is real human flesh it means he ages. That was a good way to get around it. But it also features the original Arnold from the first movie in CGI form and they re-enact the “Give me your clothes” scene. But then the old Arnold is waiting for the new Arnold – it’s a little confusing in a couple of ways… There’s quite a lot of Arnolds running around! 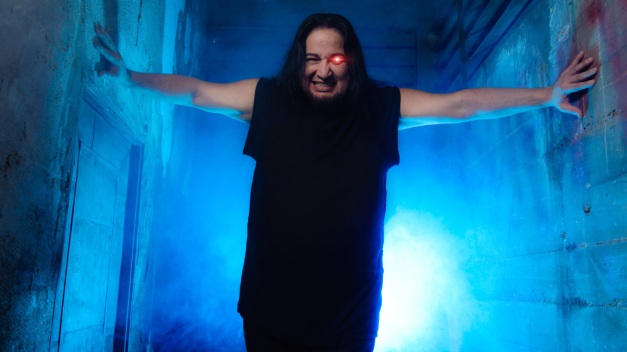 I think that these themes are still relevant and still worth thinking about, we are getting to the point with nanotechnology where you can have man-made human cells. Not to make a Terminator, but you’ll be able to fight cancer cells from these cells in the future. That’s the way we’re going.

If I had to score this movie I’d give it an eight out of ten. The concept was cool, a lot of the visuals and set pieces were great too and it’s awesome to see Arnold there and still doing his thing. Playing his most famous character and kicking ass. Some of the lead characters maybe don’t measure up to the previous movies, but when you go to see a Terminator movie it’s got the things here that you’ll be expecting and enjoying from all the classics.

FEAR FACTORY recently announced they will be touring Europe in celebration of the 20th anniversary of their highly revered second studio album “Demanufacture”. The tour will be a very rare event for fans with Fear Factory playing “Demanufacture” in its entirety!
They will also showcase songs from their highly anticipated new album “Genexus” – out 7th August via Nuclear Blast.

Los Angeles cyber metallers FEAR FACTORY played the song “Archetype” — originally written and recorded during guitarist Dino Cazares‘ time away from the band — for the first time in years earlier tonight (Thursday, July 4) at the Tivoli in Brisbane, Australia. Fan-filmed video footage of the performance can be seen below.

Said Cazares after the show: “Yes, I played ‘Archetype’ last night. Some people are tripping out about about that in a good way. I just want to please the fans.”

Asked whose idea it was to perform FEAR FACTORY‘s classic classic 1995 sophomore album, “Demanufacture”, on the band’s Australian tour, vocalist Burton C. Bell told The Rockpit: “It was kinda like a joke at first. Last time we were there for ‘The Industrialist’ on tour, we were playing a lot of tracks from ‘Demanufacture’, and we just thought, ‘Why don’t we just play the whole damn record?’ and the promoter was, like, ‘Oh, that’s actually a great idea. We should plan it properly,’ and blah blah blah, and just started talking about it. And we thought about it, and it was Australia that embraced FEAR FACTORY wholeheartedly first and so Australia was where we received our first silver and gold records for ‘Demanufacture’, so we figured that we’d go to Australia.”

FEAR FACTORY will also perform “Demanufacture” in its entirety aboard the 2014 edition of the world’s biggest heavy metal cruise — 70000 Tons Of Metal — which will sail January 27-31.

Austria’s Stormbringer.at webzine conducted an interview with guitarist Dino Cazares of Los Angeles cyber metallers FEAR FACTORY before the band’s June 1 concert at Metalfest in Austria. You can now watch the chat below.

FEAR FACTORY‘s new album, “The Industrialist”, can be streamed in its entirety at AOL Music. Due in North America on June 5 via Candlelight Records, the CD is a conceptual record based around a story written by Burton C. Bell. Lyrics to the album’s ten songs divulge the narrative as discussed recently by Bell with Decibel magazine. The album’s artwork was created by American designer Anthony Clarkson with additional direction from the band. The album will be available on three formats — standard CD, a limited edition deluxe digi-book (featuring two additional songs), and 180-gram double vinyl.

* Available on deluxe digibook only

“Recharger” can be purchased via iTunes.

FEAR FACTORY recently enlisted Matt DeVries as the band’s new bass player. DeVries, previously of CHIMAIRA (where he played guitar) and most recently SIX FEET UNDER, joined FEAR FACTORY as the replacement for Byron Stroud (now with 3 INCHES OF BLOOD).