Sporting a dynamic and renewed lineup featuring founding member, producer, singer, and keyboardist Alessandro Del Vecchio, guitarist Aldo Lonobile (Secret Sphere), bass player Nik Mazzucconi (Labyrinth), and drummer Marco Di Salvia (Hardline), EDGE OF FOREVER are back with what is easily their strongest album to date, which heads back to the heavier, but still melodic, sound of their acclaimed debut album.

Watch below the video for “Native Soul”, the title track of upcoming album, coming out on December 6th via Frontiers Music.

Also stream the previously released single, “Take Your Time” (a tribute to the late great Marcel Jacob) and pre-order the album here: https://radi.al/NativeSoul

Years of artistic collaboration between Alessandro Del Vecchio and Frontiers have led to some simply amazing records and “Native Soul” is no exception! Anthemic songs, epic choruses, bombastic production, and a deep, strong vocal performance are the foundation of the album.

“I’ve been eager to reach the sound we have now as a band for years,” says Alessandro. “I chased very hard what I envisioned when I wrote these songs, but the final result exceeded my expectations! The band is tighter, tougher, and classier than ever. Honestly, I couldn’t be happier and more pumped about it. Edge Of Forever always had those classic rock and neoclassical elements that could remind one of Talisman, Yngwie Malmsteen, and House Of Lords, but this time we wanted to take the strong melodic, hard bluesy edge that bands like Tangier have and blend it all together.”

Since Alessandro Del Vecchio teamed up with Frontiers he has since became a reference name in the hard rock world, being the producer, songwriter and musician behind successful albums with the likes of Hardline, Jorn, Revolution Saints, The End Machine, Find Me, First Signal, Harem Scarem, House Of Lords, and many others. Beside being one of the most talented musicians in the scene, Alessandro is also known for his high tenor soulful voice. Aldo Lonobile was the first choice when the band was ready to enter the studio. Loaded with a great attitude and undeniable talents, Aldo’s guitar playing fits like a glove for Edge Of Forever. His aggressive rhythm guitars and powerful but soaring guitar solos give new life to the sound of the band. Still forged as a metal/hard rock guitarist, Aldo’s guitar work on the album allows the listener to have a new perspective of him as a player, with bluesy solos and melodic phrasings. Nik Mazzucconi is the only member left – with Alessandro – from the last album “Another Paradise” and his playing pairs perfectly with powerful drummer Marco Di Salvia, already a bandmate of Alessandro in Hardline.

“Aldo and I have been talking for years about doing something together and now that he is also part of the extended Frontiers family, my choice couldn’t have been easier. He was #1 on my list ’cause I knew he had the chops and understood the sound I wanted for the record and for the band. He is known to be more of a metal guitarist, but he blew me away in the studio with great melodic solos and you’ll hear that bluesy side you wouldn’t expect from him. Nik and Marco already played together several times and I always witnessed a great chemistry and they locked perfectly on these songs, giving them a completely live and in-your-face attitude. There are still tons of keyboards and soaring melodies, but this is certainly a riff-based record. We also wanted this album to be different from your ordinary rock record and and give it a different vibe from the start. That’s why the first song on the album is the acapella “Three Rivers”, like a warm welcome to “our” own sound and world.”

““Native Soul” is my very first hard rock release,” says guitarist Aldo Lonobile “I grew up listening to this genre and its legendary guitarists so when my buddy Alessandro invited me to join the band and played me the first few demos I was sure that we were on the way to deliver a gem of an album. I had to change drastically my playing for this record, but at the same time I am sure everyone will enjoy the final result.”

“Native Soul” is a deep and spiritual record. The Native concepts of Life, Faith and Love for Mother Earth come alive in songs like the title-track “Native Soul”, “Promised Land”, “Carry On”, “Wash Your Sins Away” and the acapella intro of the album “Three Rivers”, turning them all into anthems about life strength and motivation. “”Native Soul” is a very positive record and I want people to listen to these songs with a smile on their faces and enjoy a band pouring blood, sweat, and love into every single note. It’s my vision of the world, of life, and faith and gives a strong message of never letting anything stop you,” concludes Alessandro.

EDGE OF FOREVER Signs To Frontiers Music For Multi-Album Deal

Frontiers Music Srl is pleased to announce the signing of EDGE OF FOREVER to the label for a multi-album deal!

Originally formed in 2002, EDGE OF FOREVER released their first album, “Feeding The Fire” in 2004 which was produced by the late Marcel Jacob (ex-Official Yngwie Malmsteen, Talisman). Just a few months later, the band was already working on a new album with producer Bobby Barth (Axe, BLACKFOOT) in New Orleans. The collaboration led to “Let The Demon Rock’n’Roll,” which came out about one year after the debut album. In 2005 the band saw a change of personnel, leaving only Alessandro Del Vecchio and Francesco Jovino from the original line-up. Alessandro then took on the lead vocal spot and guitarist Walter Caliaro and bassist Nik Mazzucconi (Ian Paice, Carmine Appice) joined the band.

In 2010, with the new lineup operating like a well oiled machine, EDGE OF FOREVER released their third record entitled “Another Paradise”. The album was once again very well received and Alessandro Del Vecchio’s reputation as producer started to grow steadily. While Francesco was stepping into the metal world with U.D.O. and a short tenure with ACCEPT (now he plays drums with Primal Fear), Alessandro Del Vecchio started to tour with artists like Ian Paice, Glenn Hughes, Bernie Marsden, and Carmine Appice and also continuing to work in the studio. In 2011, Alessandro signed on with Frontiers Music Srl to produce and be part of the come-back of the legendary hard rock act Hardline. Again with his pal Francesco Jovino on drums, Hardline released “Danger Zone” in 2012 while the video for the single from the album, “Fever Dreams” reached almost 1 million views on YouTube.

Now it’s time for Alessandro and his guys to step out on their own and show the world what they’re capable of! “I’m very honored to have my own band Edge Of Forever signed to the big Frontiers family,” says Alessandro Del Vecchio. “It’s been a few years now that I’ve worked with Serafino and for some time we have been talking about a record with me on vocals, which couldn’t be with anyone but with my guys. Francesco, Nik and Walter have been with me already on a few albums I released through Frontiers, but this time is gonna be different. It’s our baby and our primal need of creation. We are entering the studio this summer and I promise we will deliver our best songs and I will top my productions with a bombastic and epic sound. In addition to the new album, we decided to allow Frontiers to re-release our previous albums – which I’m gonna remaster with bonus tracks – for all digital platforms. I guess it’s time for people to listen to the out-takes of our previous albums with our friends Jeff Scott Soto Official and Bobby Barth. This made the deal even more attractive for us. Now it’s our turn to say something and give Frontiers our best album so far! I feel and we feel more confident than ever in what we can do. Years of working in the Champions League of Rock’n’Roll forged us as better musicians. I honestly can’t wait. After 5 years of amazing music with Frontiers, I’m excited to do something again with the band that started it all for me. Who’s Luckier Than Me?®” 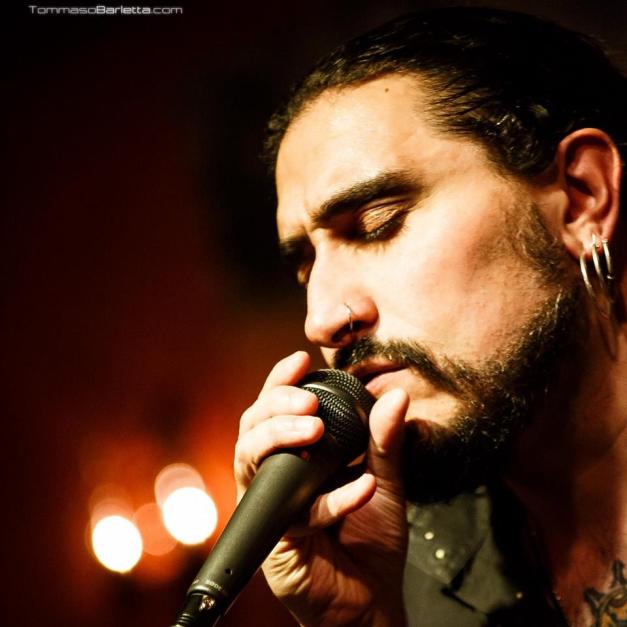 How do you introduce, in a proper way, one of the most searched musicians, teachers, songwriters and producers worldwide? Maybe it’s better leave the name speak for itself: Ladies and Gentlemen, may I present to you Mr. ALESSANDRO DEL VECCHIO, involved in several bands, projects, and in Music with all it’s flavours and genres.

Here would be enough material to write a book, therefore Tarja Virmakari found herself in the front of accurate Artist Study to be able to find the right key words to conduct an interview as an overview of Alessandro’s musical life. So, last week Tarja and Alessandro “met” via Skype webcam, and during this 1:14 hours long and pleasant chat, among the many topics, Alessandro talked about the recent and upcoming activities of REVOLUTION SAINTS, HARDLINE, EDGE OF FOREVER, VOODOO CIRCLE, RATED X, LEVEL 10 and VERDE LAURO. Besides these, Tarja and Alessandro talked about his production work at Frontiers Music and the upcoming second edition of Frontiers Rock Festival, and his work as teacher and vocal coach at Lizard Academy. Alessandro also paid his own tribute to Fergie Frederiksen and Mike Porcaro, also talking about the great Jason Becker and his inestimable career. He also revealed his big dream about the band he would love to work with… To discover more about these and all the discussed topics, please sit down and join the chat below.