JOHN GARCIA is the founder & most distinctive voice of the entire desert rock genre.

If Rock’n’Roll is personified by the Stones and Pop music by the Beatles, then Stoner was born with KYUSS – reaching definitive cult status they do deserve worldwide ever since – before their three genre-defining masterpieces Blues For The Red Sun, Welcome To Sky Valley, as well as …And The Circus Leaves Town until their split in 1995.

After sharing a dream-come-true experience with fans in major festivals and great venues around the world fronting Kyuss Lives, legendary singer and frontman JOHN GARCIA recorded a follow-up to his legacy as Vista Chino with this critically acclaimed Peace LP. Next chapter, a long awaited intimate project: The solo album of John Garcia – a masterpiece by the most distinctive voice of the entire Desert & Stoner Rock scene – which has been released worldwide in summer of 2014 on Napalm Records!

To celebrate his new release, John Garcia will hit the stages for an extense European tour which starts this week, not only presenting his solo record live, but also playing past and present: From legendary Kyuss songs off Sky Valley, Blues for the Red Sun, …And The Circus Leaves Town – including some rarities even Kyuss never played live – to Slo Burn, this tour will be a highlight and resumé of legendary tunes, that John Garcia has created in his career.

John Garcia will be now hitting the road with the following, fantastic musicians on stage:
Ehren Groban – Guitar ( War Drum ), Mike Pygmie – Bass ( You Know Who ), Greg Saenz – Drums ( You Know Who, The Dwarves ).

Purchase your tickets now at: http://smarturl.it/JohnGarciaTickets

German thrash giants KREATOR have published a European-Tour trailer as a foretaste of their launching on November, 26th in Lyon, France.

To get you right in the mood for this winter´s mega-event, check out the clip below:

The tour is an absolute must-see for all metal fans, for after the Tilburg-Show on Dec.4th, there will be ARCH ENEMY, SODOM and the Polish death metallers VADER accompanying KREATOR on tour. Leading with a total of 21 cities.
Since the band´s concerts have been rather scarce on European soil recently, this is going to be an opportunity that many fans have been waited for eagerly.

KREATOR Frontman Mille comments:
“Many of our European fans haveexpressed their displeasure about the fact that the band – besides of some festival appearances – has played relatively seldom in Europe.
In 2013 we have primarily taken care of our fans overseas. Now we would like to change that:
Right on time for the re-release of “ENDLESS PAIN”, “PLEASURE TO KILL” and “EXTREME AGGRESSION” in all possible formats -. even on vinyl (!) – we are going to complete the tour cycle for PHANTOM ANTICHRIST with a rich concert tour in Europe. This will be the last opportunity to see KREATOR in the context of a hall tour for a long time because we are going to work on our new album and play only a few selected concerts in 2015. We are already full swing working on a a brand new multimedia stage show, plus we are going to have a several surprises in the upcoming setlist. Again we are going to be accompanied by our friends of ARCH ENEMY, who will present their new album “War Eternal”, VADER are going to be with us too, as well as our old companions of SODOM. This tour is gonna to be the ultimate hammer!!” 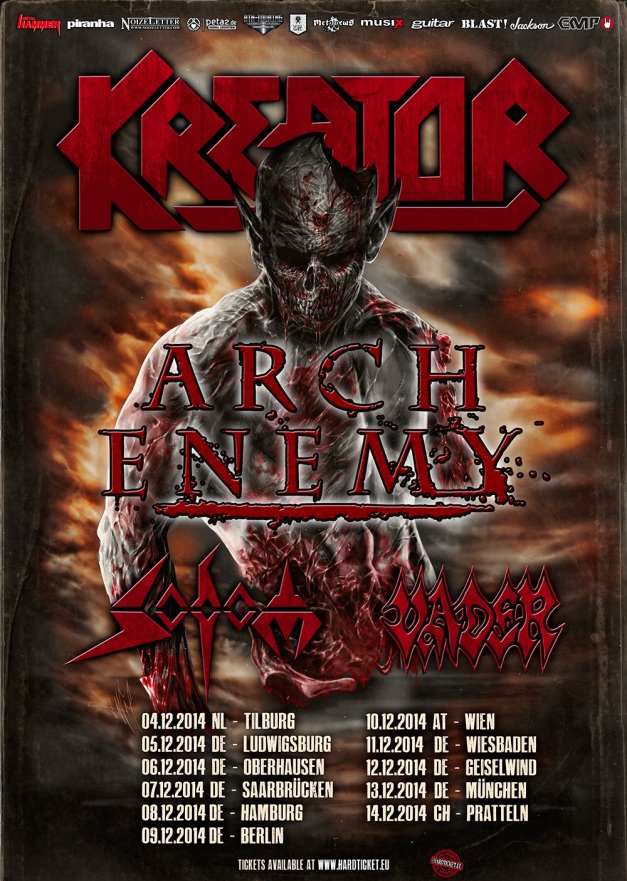 Symphonic metallers XANDRIA have announced a headlining European tour this autumn. The dates can be seen below:

“Sacrificium”, the sensational album by Symphonic Metal shooting stars XANDRIA has been released via Napalm Records this year. After numerous summer festivals, sold-out shows and chart entries, the Germans are currently on the road in the US with SONATA ARCTICA and their label mates DELAIN.

This bombastic symphonic metal masterpiece filled with passion and sweeping vocal lines, is now set to hit the road again this autumn all over Europe. Beginning in October through December XANDRIA will convince LIVE in Germany, Poland, Hungary and the Netherlands, to name just a few.

“I cannot even begin to tell you how proud we are of this album,” comments frontman Robb Flynn. “It’s been a heck of a ride. It looked like it might not ever happen again at one point, but man, this album is a milestone for us. You’re going to love it Head Cases.”

“Without getting too philosophical on ya, bloodstone and diamonds represent two of the hardest materials on earth, it is also a lyric from the opening track of the album ‘Now We Die’. In many cultures the bloodstone has been used as an amulet to protect against evil, and is the symbol of justice. Diamonds and are hardest natural material on earth (which is how we feel about our music), and it also represents the diamond logo I drew 22 years ago (in my wife’s apartment on Dover St. in Oakland) that has become the symbol for the band.”

“Guest musicians include 2 different string quartets featuring the original Quartet Rouge that appeared on our last album »Unto The Locust«. And a new all-male quartet which we featured on the song ‘In Comes The Flood’.”

“String arrangements for 2 of the songs ‘Now We Die’ and ‘Sail Into The Black’ came courtesy of myself and Rhys Fulber who has worked with everyone from Sarah McLachlan, to FEAR FACTORY, and the string arrangement for ‘In Comes The Flood’ came courtesy of myself and ex-WORSHIP and current-BRING ME THE HORIZON keyboardist Jordan Fish, who is a producer in his own right.”

“We worked with several artists to complete the 28 page (!) ‘standard’ CD booklet, as well as the 48 page (!) hardcover leather-bound Media-book that will serve as the special edition, including Rafal Wechterowicz, Marcelo Vasco, and long-time MACHINE HEAD art-collaborator Strephon Taylor. The theme was to have both CD and hardcover Mediabook look like an old Alchemy book from the 1800’s, with weathered edges, sepia toned pages, and magic / masonic / alchemy themed woodcarvings throughout.”

Italy’s LACUNA COIL have announced their first European headline tour in support of the band’s critically acclaimed new album “Broken Crown Halo”. LACUNA COIL will be joined on all dates by Motionless In White and Devilment.

After the band have spent the majority of 2014 touring in North and South America they are excited to finally perform “Broken Crown Halo” headline sets to European audiences.

Joining the band on all dates are American buzz band Motionless In White (who are debuting their latest release “Reincarnate” in Europe), and Devilment – the new horror metal project from Cradle Of Filth frontman Dani Filth.

Cristina Scabbia (vocals): “This is going to be HANDS DOWN the tour of the year and I am so damn excited it’s not even funny! A melting pot of darkness, adrenaline, sick rock metal and goth atmosphere is going to embrace you all soon… LACUNA COIL + Motionless In White + Devilment are going to paint your heart black in November. Come see us, you won’t regret it (and damn, I can’t fucking wait!).”

with Motionless In White, Devilment

Upon its release “Broken Crown Halo” landed in the international top 100 album charts worldwide including:

You can check out LACUNA COIL’s video for “I Forgive (But I Won’t Forget Your Name)” Below:

MONUMENTS: Announce More European Touring With AFTER THE BURIAL And DEAD LETTER CIRCUS; To Play Download Festival This Weekend

Before playing Download Festival on Sunday, UK’s MONUMENTS can announce more touring in Europe. In October/November they will be heading out with their friends in After The Burial and Dead Letter Circus:

In addition they have launched “The Alchemist”, another track taken from their upcoming album “The Amanuensis” (people in Germany please click on: http://soundcloud.com/centurymedia/monuments-the-alchemist):

Stay tuned for another track!

“The Amanuensis”, MONUMENTS’ sophomore album and follow up to 2012’s critically acclaimed “Gnosis”, is scheduled for a release on the following dates:

You can already preorder “The Amanuensis” and get access to three tracks (“I, The Creator”, “Origin Of Escape” and “The Alchemist”) when preordering the album digitally from iTunes or Amazon in Europe, Australia/NZ:

Physical formats are available via the following outlets:

After a recent short run with Dioramic, MONUMENTS will embark on a full European tour with Protest The Hero right around the release of “The Amanuensis”. Afterwards the band will head to North America for the very first time together with Glass Cloud and Scale The Summit before returning to Europe with After The Burial and Dead Letter Circus.

with Protest The Hero: