Interview With SCHMIER: “The first song I could ever play on bass was Wheels Of Steel”

Old school heavy metallers  PÄNZER unleashed their new album “Fatal Command” on October 6th, 2017 through Nuclear Blast Records, which is the follow up to 2014’s “Send Them All To Hell”.

Just after the album release, Metal Shock Finland Senior Manager Alison Booth had a chat with front man SCHMIER for a special “Fatal Command” Blackdiamond’s Metal Mayhem radio show, which can be listened to at this location.

SCHMIER had plenty to say about the new record and line-up of the band, as well as his love of classic British metal! You can read a few excerpts below and the full audio chat, (which was a lot of fun!) is on the audio player:

“A very special song for me was Satan’s Hollow, because it was the first song we wrote together when we started the procedure for the new album. When we knew Herman would not be there any more and we had to create a new songwriting team and we were asking ourselves ‘are we able to sound like Pänzer?’ and to continue. Satan’s Hollow was the first song we wrote  and for me it was a do it or leave it kind of moment. When the song was done and it turned out great, we knew were going to do a second Pänzer album.

The song for me is a special one and of course it’s the most Judas Priest moment on the album and I’m a huge Judas Priest fan.”

So we then had a quick chat about the mighty PRIEST! Schmier expressed his excitement about their forthcoming new album:

“Especially because Andy Sneap is doing it, I’m expecting a great album. I’m sure it’s gonna be amazing because Andy is someone who knows how to get it out. The Accept album he did, the comeback album was fantastic because he made the band listen to their old songs again and brought in a lot of good vibes and motivation for the band. And I think it’s very important as a producer to make the band understand that they have to fulfil certain expectations from the crowd. I’m sure Andy will do a great job with this Priest album, I’m really looking forward to hear it.”

“My first heavy metal concert was Saxon in 1981 on the Denim And Leather tour and that’s also one of the first moments that the members of Destruction met, at the concert. The first song I could ever play on bass was Wheels Of Steel actually and Doctor Doctor from UFO, those were the two songs.

So, when it came to a cover version for Pänzer, I came up with the idea of doing Wheels Of Steel and I still love Saxon. Actually there is only one main riff in the song – you would think it’s very easy to cover the song, but in the end it was not so easy to cover it. It has a certain feel and there’s not much happening, but a lot of counting is going on. I don’t know if I ever recorded such a stripped down song, it was quite interesting for me as a musician to do that.”

Heavy metal saviours PÄNZER will unleash their sophomore record entitled “Fatal Command” on October 6th, 2017 through Nuclear Blast Records. The band have now unveiled another new interview trailer. Watch and listen what frontman Schmier has to tell about the new band line-up and name as well as the members’ impact:

Heavy metal saviours PÄNZER will unleash their sophomore record entitled “Fatal Command” on October 6th, 2017 through Nuclear Blast Records. After revealing why they picked such politically charged artwork in the first album trailer, the band has now launched a second trailer covering the lyrical content. Watch as front man Schmier opens up about what he was influenced by when writing the album:

Schmier comments:
“The lyrics of the album are a personal view of mine on the world and of my life also – I have some personal lyrics in there about a friend of mine who turned schizophrenic, which is of course very intimate and for me it’s been a great relief to write about it. But I’m also an old punk and like to create lyrics about stuff that’s going on in the world.”

Heavy metal saviours PÄNZER will unleash their sophomore record entitled “Fatal Command” on October 6th, 2017 through Nuclear Blast Records. After releasing not only a strong musical, but also political statement in the form of the lyric video for ‘We Can Not Be Silenced’, the band with vocalist and bassist Schmier has revealed the first part of an album trailer series. Click here to learn more about the detailed album artwork:

“With “Fatal Command”, we pay tribute to our early days and the era of NWOBHM,” Schmier commented. “The new songs are faster, heavier, catchy and even more melodic, without being commercial at all. We wanna keep the old and original metal spirit alive.”

“Fatal Command” lives and breathes heavy metal like few other albums of recent years do. It is a monolith of a record on which the tempestuous music, the provocative artwork and Schmier‘s social-criticism come together under a metallic and indestructible hide, courtesy of Little Creek Studio in Basel, Switzerland. One thing, however, is setting “Fatal Command” apart from the perfect heavy metal record: “There’s no ballad! But as the singer, I wanted to spare mankind,” he laughs. Consequently, PÄNZER prefer to hit the throttle and concentrate on kicking as much ass as possible. “Fatal Command” proudly wears the insignia that so many current bands are lacking, a bold statement against wimps and posers. PÄNZER swear a solemn oath on “Fatal Command”: They will be true to heavy metal in good as well as in bad times, in sickness and in health. They will love it and honour it all the days of their lives until death does them part. Amen!

After the departure of Herman Frank (VICTORY), PÄNZER recruited Pontus Norgren of HAMMERFALL to aid their warfare, as well as V.O. Pulver (GurD, POLTERGEIST) on guitar, who already helped out for their latest live shows and has now become a full time member of PÄNZER. “After producing the debut with PANZER, the guys asked me to help them out live to provide the double axe-attack on stage,” remembers V.O. Pulver. “Of course I took the chance to rock out with my buddies. And when the opportunity came up to join them permanently, I didn’t hesitate to accept and now I can’t wait to play the sound of my youth!” Also Pontus was just as excited to join the heavy metal war machine: “It was not a hard decision when I got asked to join PÄNZER, it was a straight YES! To be able to create music with good friends is the most important thing in my world and in this band, having fun when making music, is number one.” 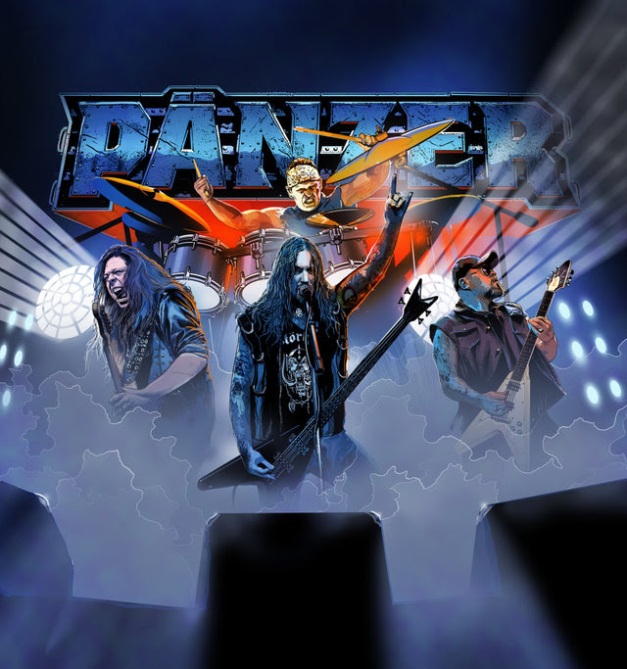