US metal legend ICED EARTH return to Europe for the “Incorruptible” world tour in January, supported by Freedom Call and Metaprism. Backed up by their brand new studio album “Incorruptible”, which received raving reviews everywhere (album of the months in Rock Hard, Aardschok and Rock It, soundcheck #2 in Metal Hammer, soundcheck #3 in Legacy etc.), ICED EARTH will once more solidify their reputation of being one of the most honest and most reliable live bands on this planet.

„Brothers and sisters, The time is drawing near! We’re happy to announce Freedom Call and Metaprism as support for our upcoming January dates in Europe. Lots of Incorruptible and lots of classics headed your way! Metal will flow!!“ Jon Schaffer

Posted by tarjavirmakari on November 8, 2016
Posted in: Int. News. Tagged: “Metal Is For Everyone”, FREEDOM CALL, Master Of Light. Leave a comment

German melodic metallers FREEDOM CALL have released a new video today for the song “Metal Is For Everyone” taken from the band’s forthcoming studio album “Master Of Light”, on SPV Steamhammer. Watch the video below.

Chris Bay about the video: “Hey Callers, finally here it is! We can’t wait to introduce our brand new video clip “Metal is for Everyone“ for the upcoming new masterpiece „Master of Light“. This time we were intitating an amazingly successful campain on Facebook, we’ve never seen before. And made it possible, that the craziest metal heads from all around the world areassuming the part of the main actors of the video clip! Whether from Thailand, USA, Australia, Chile, Brazil or from almost entire Europe…so incredible, we wanna thank you so much for your creativity, you were really kicking ass! So we could prove, that two things are absolutely facts: Freedom Call has defintitely the best and happiest fans in the world and…METAL IS FOR EVERYONE!”

Good news for all those who didn’t get enough light during this, in meteorological terms, rather mixed summer. The coming of the light is near … from 11 November 2016 (USA/Canada: 18 November 2016) via SPV/Steamhammer, the arrival of Master Of Light will put an end to all this weather-related tristesse and brighten the mood with the familiar positive FREEDOM CALL aura.

Frontman Chris Bay promises: “Our fans can look forward to a whole dozen new songs which once again present the different aspects of our melodic metal with lots of fast-paced numbers but also progressive references and balladesque moments. There’s bound to be something for every Freedom Call fan.” Master Of Light will be available on Steamhammer/SPV in a Digipak and double colour vinyl version, as a limited box set with lots of bonus material and a special give-away, as well as for digital download.

The album was recorded at the band’s own Little Sun Creek Lounge studio near Nuremberg, with Chris Bay and Stephan Ernst, who already co-produced the predecessors Land Of The Crimson Dawn (2012), Beyond (2014) and Eternity – 666 Weeks Beyond Eternity (2015), manning the controls. The current line-up featuring the two founder members Chris Bay (vocals, guitars) and Ilker Ersin (bass) plus their two fellow combatants, guitarist Lars Rettkowitz and drummer Ramy Ali, has proved itself many times over, currently captivating audiences at major festivals worldwide with their lead single ´Hammer Of The Gods`, which arrived at the physical and digital stores in July. Even before the release of the album, there will be a new video clip to support the album track ´Metal Is For Everyone`, which is set to additionally whet our appetite for Master Of Light. Bay on the significant song title: “There’s a bit of heavy metal in all of us, isn’t there?”

You can see the lyric video for “Hammer Of The Gods” here:

“Master Of Light” will be released in three physical versions, each with a different cover:

Posted by tarjavirmakari on July 15, 2016
Posted in: Int. News. Tagged: ´Hammer Of The Gods`, FREEDOM CALL, Master Of Light. Leave a comment

German melodic metal band FREEDOM CALL will unmistakably be swinging the hammer this summer: 8 July 2016 sees the release of their brand new single ´Hammer Of The Gods`, via SPV/Steamhammer, a first taster from the upcoming album “Master Of Light” as the approaching release date glows upon the horizon.

You can order the single here: https://FreedomCall.lnk.to/HammerOfTheGods

With ´Hammer Of The Gods` the band surrounding frontman Chris Bay prove once again their ability to blend gritty, cool grooves and anthemnic melodies to a typical Freedom Call song. “With its epic flair I think this number sets the mood perfectly for our new album. Is it going to trigger an earthquake? Who knows? In any event the song will hit like a metallic crash of thunder,” explains Bay.

With their new single Freedom Call illustrate the intense energy that emerges from the current lineup. Through extensive touring the two founding members Chris Bay (vocals, guitar) and Ilker Ersin (bass), together with comrades-in-arms guitarist Lars Rettkowitz and drummer Ramy Ali, have cemented once and for all their reputation as a live band to be reckoned with and are set to thrill their faithful followers on stage this summer. Bay: “Even if we’ve been a little quiet of late and only played a couple of selected festivals, the fans can look forward to some great shows where we’ll also being playing ´Hammer Of The Gods`, giving them a glance at the future direction of the band.”

The band also created a lyric video for the song which you can see here:

At their upcoming festival appearances Freedom Call will be handing out a strictly limited edition of their new single to the audience for free. 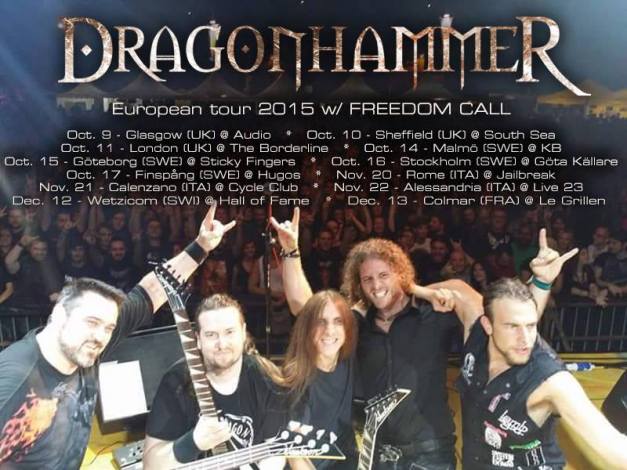 ALPHA OMEGA Management is pleased to announce that the Italian power prog metallers DRAGONHAMMER – who were already confirmed to support FREEDOM CALL for their Italian shows – to be supporting the Germany’s premier Melodic Metallers also at other 9 shows. Check out all the dates below.

The new DRAGONHAMMER album is quite ready and it is announced as the most mature, epic and powerful of their 15 years career. It will be released in the early 2016 via My Kingdom Music, and you’ll get in your hands a new milestone of Epic and Melodic Power Progressive Metal!

Comments the band:
Details will follow soon, so wait for something really shattering, but now we are happy to announce that the band will set off their new European tour together with German band FREEDOM CALL. Be a Dragon for a night! 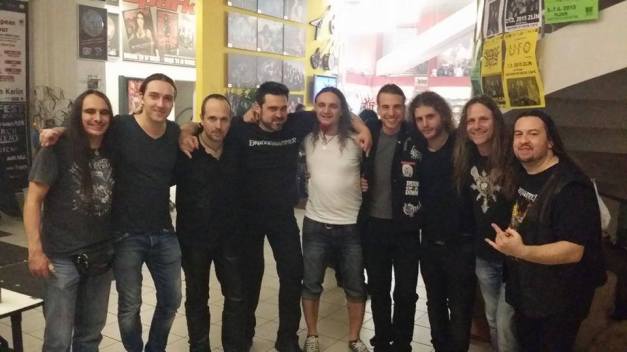 Freedom Call and Dragonhammer in 2014

Rock On Agency, in collaboration with Alpha Omega Management, is delighted to announce the three Italian shows of the Germanys premier Melodic Metal band FREEDOM CALL, currently touring Europe on their “666 Weeks Beyond Eternity Tour 2015”. Italian power prog metallers DRAGONHAMMER are confirmed as special guest for these shows, check out the dates below. DRAGONHAMMER shared the stage with FREEDOM CALL already on their “Light Over The Beyond” European tour in 2014 (see the picture above). 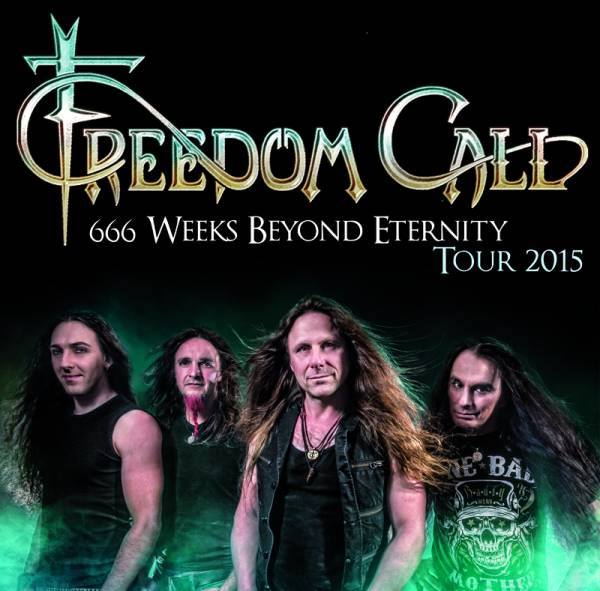