Bassist GREG CHRISTIAN: “The Moment I Knew I Was Done With TESTAMENT”

According to Blabbermouth.net TESTAMENT‘s original bassist, Greg Christian, who was most recently forced out of the band earlier this year, has posted the following message on his Facebook page:
“Fuck it. Last week I said I’d do this, so here it is. And if this gets picked up by any sites, all I have to say is, I can say whatever the fuck I feel like on my own page. If you don’t like it, don’t read it. I’m in the US of A and this is my free speech.

“The last straw [that led to my split with TESTAMENT was as follows]. [I was] sitting at the bar in the Seoul/Incheon airport [in South Korea], with a couple of the entourage, and Chuck [Billy, TESTAMENT singer] walks up and casually says he just spent three grand, cash, on a first-class upgrade. [He] said he thought it was worth it to be more rested for the first Euro show, [which was to take place] in a couple days. Then, of course, Eric [Peterson, guitar] gets up and walks over to the ticket counter (gotta keep up with the Jones’s or the Kardashians or whoever lol).

“[Here’s some] perspective. As my employer, in a business I helped start and put (at that time) just over 20 years into — 12 then 8 — and helped build from nothing the first time and helped resurrect from almost nothing the second time, this $3K for one first-class upgrade stuck in my mind, and when I got paid a couple weeks later, I was just thoroughly disgusted and done with TESTAMENT. ‘My employer’ thinks that his ass being in a more comfortable seat for one ten-hour flight is worth more than I was worth for five festival performances (on two continents — neither this one), a half dozen shitty flights plus a week and a half away from home and my family.

“I did this as a job…
“I don’t make anything off anything else, so it’s not a situation where I get anything off the back end. In other words, promoting the band only helped my employers — not me.

“I don’t know actual numbers‬ — no one ever told me — but I heard rumors the band made $100K just for the one Korean show and watched both Chuck and Eric spend $$$ like it was true (of that I got about $700).

“Tune in next week if you want to read about a ‘band meeting’ a few years ago in Sao Paulo, Brazil (the last time I tried to talk to those guys about $$$) and hear a few of the things that were said…

In a recent interview with Germany’s Rock Hard magazine, TESTAMENT guitarist Eric Peterson stated about Christian’s latest departure: “Well, you know, I’ll just say this… Greg, basically, I think, was basically struggling in his mind with what he was doing. And he just seemed very unhappy on tour, and he has a lot of different reasons; he can only describe that. But he just seemed very unhappy, and we just let him go. Like, ‘OK, you’re unhappy. Then go.’ ‘Cause it was a lot of tours where he was unhappy. That’s all I can really say about that. Steve DiGiorgio came onboard for the Soundwave tour we did in Australia. Steve DiGiorgio is great. We hadn’t played with him for awhile, but it’s awesome.”
Speaking to 100PercentRock.com, TESTAMENT singer Chuck Billy stated about Christian‘s split with the group: “Well, I think Greg, he informed us that he wasn’t going to be participating on the new record release and that was his last tour with us. We knew we had Australia coming up, so, of course, Steve DiGiorgio was probably one of the first ones to come to mind. He did ‘The Gathering’ record with us and we enjoyed that whole cycle of touring, so he was definitely, probably, our first choice. We didn’t want to go through auditions and do all that. We just knew that he was here, and he could do it, and it was killer.”

Asked if there was a particular reason that Greg just had enough of it, Billy replied: “Well, I think that the last tour he just wasn’t getting along, and he just decided that that was going to be the last tour with us, so we just kind of said, ‘Well, okay. I guess we’ll have to maybe look for what’s coming up in the future.’ You know — there’s nothing we can do.”

Christian was forced to leave the band’s North American tour with LAMB OF GOD and KILLSWITCH ENGAGE in November 2013 for “personal reasons.” Filling in for him was EXODUS bassist Jack Gibson.

“It is with much respect that we announce our mutual parting with bassist Greg Christian. Metal fretless bass pioneer Steve Di Giorgio will be returning to TESTAMENT. Steve previously was a member of TESTAMENT on The Gathering (1999) as well as First Strike Still Deadly (2001). He will be joining TESTAMENT on their upcoming shows in Australia on the Soundwave Festival, Japan and Mexico City. Steve will also be taking part in the new TESTAMENT album.  We are looking forward to continuing the momentum you, the fans, have made possible.” 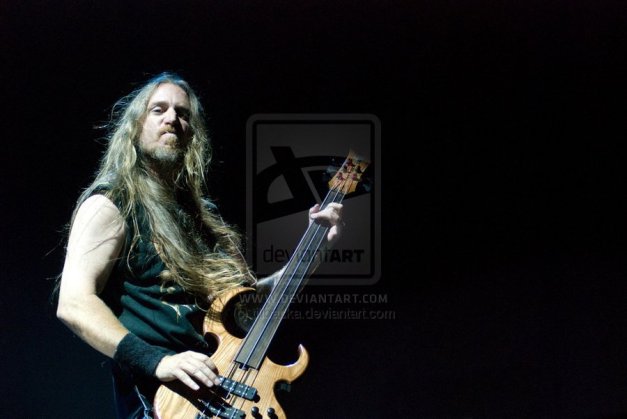 TESTAMENT are currently on the road with LAMB OF GOD and KILLSWITCH ENGAGE in the US. Bassist Greg Christian was reportedly been forced to leave the tour for personal reasons, and EXODUS‘ Jack Gibson (pictured) was tapped to fill info Christian starting November 19th in Milwaukee, WI at Eagles Ballroom. Stay tuned for updates.

Remaining dates on the tour are as follows:

Dark Roots Of Thrash, a DVD/2CD release documenting Testament’s sold-out headlining performance at the Paramount in Huntington, NY this past February, will now be released on October 18th (Europe), October 21st (UK), and October 29th (North America) via Nuclear Blast. Check out a new trailer below:

Dark Roots Of Thrash was produced by Get Hammered Productions, directed by Tommy Jones (DEATH ANGEL, KATAKLYSM, SOILWORK) and mixed by Juan Urteaga (VILE, EXODUS, SADUS, MACHINE HEAD). It captures a total of 19 live tracks with countless cams onstage and high above the audience, plus a special moshpit cam that makes you feel like you’re a part of the show!

DVD:
Intro
‘Rise Up’
‘More Than Meets The Eye’
‘Burnt Offerings’
‘Native Blood’
‘True American Hate’
‘Dark Roots Of Earth’
‘Into The Pit’
‘Practice What You Preach’
‘Riding The Snake’
‘Eyes Of Wrath’
‘Trial By Fire’
‘The Haunting’
‘The New Order’
‘Do Not Resuscitate’
‘Three Days In Darkness’
‘The Formation Of Damnation’
‘Over The Wall’
‘Disciples Of The Watch’
BONUS CONTENT:
Backstage Footage
‘Native Blood’ (Video Clip)

CD2:
‘Riding The Snake’
‘Eyes Of Wrath’
‘Trial By Fire’
‘The Haunting’
‘The New Order’
‘Do Not Resuscitate’
‘Three Days In Darkness’
‘The Formation Of Damnation’
‘Over The Wall’
‘Disciples Of The Watch’