The time of the Toxic Peril has come, and we can’t wait to get back to the Hellfest ! This year has been a rough one and a lot of changes have been made to the program, and, despite our best efforts, there have also been a few cancellations.

First of all, you’ll be happy to know that in spite of their recent problems WITCHCRAFT seem set on performing in the VALLEY on Saturday the 22nd. HIGH ON FIRE being unavailable, they will be replaced by BISON BC who are currently touring with BLACK COBRA. On the subject of the MASTERS OF REALITY; after a huge amount of correspondence and many long weeks of negotiations, we must regretfully and officially confirm the New-Yorkers’ absence from this year’s Hellfest ! We did all we could but the band have signed another, overseas gig on the very same day that they don’t seem able to back out of!

We’re currently seeking a replacement but with the festival fast approaching – and due to a lack of time and the unavailability of the bands we’ve approached about it – it has become almost impossible for us to find an appropriate subtitute… Instead CULT OF LUNA and MANILLA ROAD have offered to lengthen their set, making for an incredible show!

Regarding the TEMPLE, SVART CROWN will now be performing at 11:40 on Sunday the 23rd; SETH will play instead of NACHTMYSTIUM at 14:20 and Polish band HATE will play on Friday th 21st at 12h50!

Finally, on the ALTAR stage, due to logistical reasons, PIG DESTROYER and CRYPTOPSY will swap places!

We apologise for not being able to bring you these great bands, but rest assured that we will get them on board for the festival in the years to come!

The whole Hellfest team looks forward to seeing you in Clisson’s Green Hell, ready to take on a new flood of toxic decibels!!

Check out the Festival Line Up HERE. 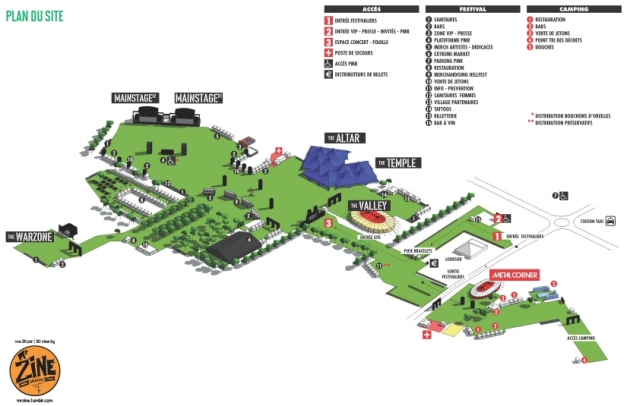 MetalSickness.com conducted an interview with vocalist/guitarist Jesper Binzer of the Danish rockers D-A-D at this year’s edition of the Hellfest festival

, which was held June 15-17 in Clisson, France. You can now watch the chat below.

D-A-D‘s 11th studio album, “DIC.NII.LAN.DAFT.ERD.ARK”, was released last November. The follow-up to 2008’s “Monster Philosophy” was helmed by Nick Foss, who previously worked with D-A-D on such LPs as “No Fuel Left For The Pilgrims”, “Sympatico”, “Everything Glows” and “Soft Dogs”. The album title is a play on D-A-D‘s original band name DISNEYLAND AFTER DARK, which had to be changed after a threat of a lawsuit from The Walt Disney Company.

Peek From The Pit conducted an interview with guitarist Luca Turilli of the Italian “cinematic” metal band LUCA TURILLI’S RHAPSODY at this year’s edition of the Hellfest festival, which was held June 15-17 in Clisson, France. You can watch the chat below.

In August 2011, RHAPSODY OF FIRE guitarist Luca Turilli and keyboardist Alex Staropoli announced their decision to go their separate ways.

Due to legal reasons, Staropoli is continuing under the RHAPSODY OF FIRE name. Turilli, on the other hand, is making his efforts available under the RHAPSODY moniker (RHAPSODY OF FIRE‘s original name), in which he is joined by guitarist Dominique Leurquin, bassist Patrice Guers, singer Alessandro Conti (TRICK OR TREAT) and drummer Alex Landenburg (AT VANCE, ANNIHILATOR, MEKONG DELTA, STRATOVARIUS).

The “Dark Fate Of Atlantis” video was filmed in Stockholm, Sweden by Swedish director Owe Lingvall of Dreamday Media (THE RASMUS, KAMELOT‘s “The Great Pandemonium”). The song was edited and made shorter for the video while on the CD it appears in its original version of 6 minutes and 29 seconds.

Peek From The Pit has uploaded a three-and-a-half-hour video review of this year’s edition of the Hellfest festival, which was held June 15-17 in Clisson, France. You can watch the footage — which includes live clips, interviews and press conferences — below.

Riff-Mag.com conducted an interview with progressive rockers URIAH HEEP at this year’s edition of the Hellfest festival, which was held June 15-17 in Clisson, France. You can now watch the chat below.

URIAH HEEP will celebrate the 40th anniversary of the release of its classic fourth album, “Demons And Wizards” by performing the LP in its entity at select U.S. shows this fall.

“Demons And Wizards” is regarded by many fans and critics alike as URIAH HEEP‘s best album, often ranked against the preceding “Look At Yourself”. Even Rolling Stone magazine, which printed an infamously negative review of the band’s debut album, ran a positive assessment of “Demons And Wizards”. The songs “The Wizard” and “Easy Livin'” were released as singles in the United Kingdom and North America, as well as many other markets. “Easy Livin'” entered the U.S. Top 40 at #39, making it HEEP‘s first and only American hit. “Easy Livin'” was also a mega hit in the Netherlands and Germany, countries which were becoming a strong market for the band. The album itself was certified gold in the U.S. on October 27, 1972.

URIAH HEEP‘s latest album, “Into The Wild”, was released in April 2011 via Frontiers Records. The CD was produced by Mike Paxman (STATUS QUO, ASIA) and features cover artwork (see below) by the renowned Greek-American artist Ioannis (LYNYRD SKYNYRD, STYX, SAGA).

Posted by aliblackdiamond on July 2, 2012
Posted in: Int. News. Tagged: Hellfest, Myles Kennedy And The Conspirators, Slash. Leave a comment

More video footage of Slash‘s June 17 press conference at the Hellfest festival in Clisson, France can be seen below (courtesy of Hard Force TV).

Slash and his band MYLES KENNEDY AND THE CONSPIRATORS — Myles Kennedy (vocals), Brent Fitz (drums), Todd Kerns (bass) and Frank Sidoris (guitar) — have announced a fall headlining tour starting September 4 in San Diego, California and wrapping October 3 in Los Angeles, California. The exclusive presale for Citi card members starts Tuesday, July 3. Citi card members will also have special access to tickets as well as VIP experiences at http://www.citiprivatepass.com. A limited amount of VIP packages — including a chance to meet Slash and get an autographed guitar — will also be available for fans during the pre sale which begins Tuesday, July 10. General public on-sales will begin Friday, July 13.

Slash has scored his first-ever No. 1 hit at rock radio as a solo artist with “You’re A Lie”, the first single from his second solo effort, “Apocalyptic Love”. The record came out on May 22 and debuted at No. 4 on the Billboard album chart a week later, selling 38,000 copies in its first week of release.

Unlike Slash‘s solo debut, which featured different vocalists on each track and a number of guest musicians, Slash has recorded all of the new CD with his touring band, MYLES KENNEDY AND THE CONSPIRATORS.

Slash co-wrote all the material with ALTER BRIDGE singer Myles Kennedy and told The Pulse Of Radio that they never struggled to find a groove together. “There was never any kind of like, ‘OK, we need to sit down and focus on writing,'” he said. “Just whenever ideas happened, I would just lay them down, and if I thought it was good enough to send to him, then I’d send it to him. And he miraculously would come up with melodies for everything I came up with, and it just happened like that.”

Slash and his band recently completed a month-long tour of Europe.

On July 10, Slash will be honored with his own star on the Hollywood Walk Of Fame.