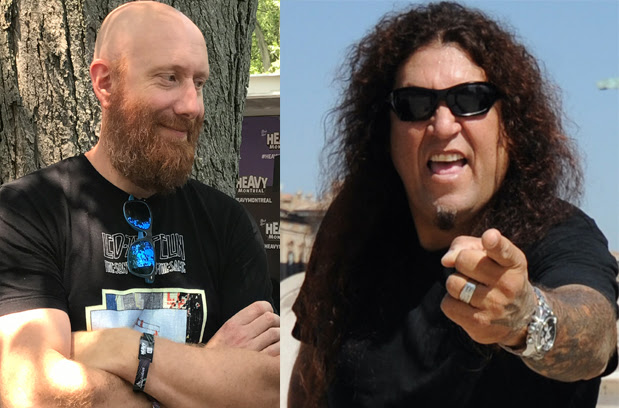 Jimmy Kay from Canada’s The Metal Voice spoke to drummer of Killswitch Engage, Justin Foley at Heavy Montreal 2019 about touring with Iron Maiden, recording with Chuck Billy from Testament and their new album Atonement via Metal Blade that will be released Aug 16 2019.

When asked if they would even consider doing an all clean vocals album
“We would never rule anything out. It’s not the kind of thing we would go into thinking about but if the songs came out that way we would do it.”

When asked about Testament’s Chuck Billy’s guest vocals on the song “Crownless King,” on the new album
“When we had the song finished I think it was guitarist Joel Stoetzel that suggested that Chuck Billy’s voice would sound awesome over this song. We had done a tour with them years ago so we knew him, so we sent him the song but we didn’t hear anything back for some time. Then one day he just emailed us back with him tracking the vocals. We all heard it and said it was perfect, Chuck Billy crushed it.”

When asked about former singer Howard Jones guest vocals on the new song Signal Fire
“We had run into Howard Jones recently at a couple of shows and hung out. our singer Jesse Leach said we should have him sing on the new album. Howard crushed it and he sounded great on the track as always. It was cool to have their two voices together harmonizing. ”

When asked what they learned touring with Iron Maiden
“To see them doing it for as long as they have been doing it and have the dedication they put on every single night is really inspiring. It kind of shows you what it is like to be at the highest level.”

When asked if they would ever consider touring with both vocalists Howard Jones and Jesse Lech
“No way, singer egos, two of those, get out of here (laughs). Only one of them is enough.”