PRIMORDIAL have announced the bands they have hand picked to play their Redemption Festival 2013 which takes place at The Button Factory in Dublin on February 9, 2013. 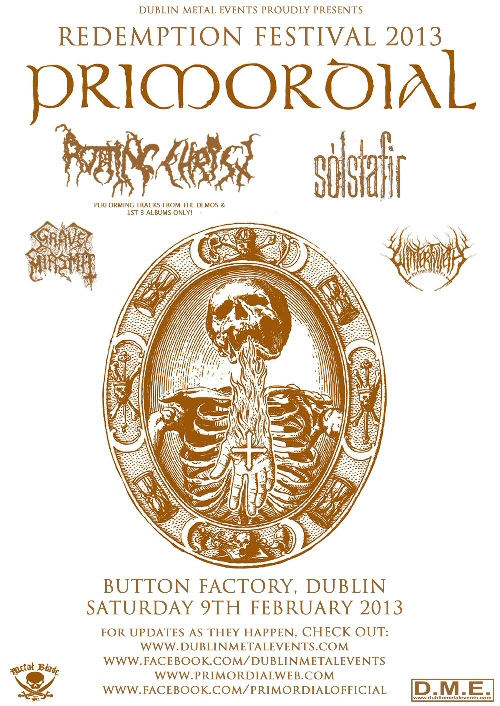 NEMTHEANGA explains why they chose these bands:

The idea to create a small hand picked festival in Dublin came about really when we broached the idea of another Dublin hometown show for Primordial following our 20th anniversary show here last year. We knew we had to bring something new, challenging and exciting to the table. So we sat down with Fergal from DME and begin to think about creating our own festival and making an event of the show. Over the years Ireland has had the odd attempt here and there at festivals but this will be the first time Dublin will have it’s niche metal festival with an emphasis on the darker side of metal and hopefully we can make this date in peoples calendars for the years to come and if successful we can bring Redemption to Dublin every February….

Long time friends of ours, we released a split 7″ with them several years ago through Sentinel Records. Guitar player Ger may be well known to Primordial fans as our substitute member over the last decade and more. They will have a new album to promote and they are our Irish representatives at Redemption.

We became fast friends with them over the last couple of years and they are strong representatives from the growing UK pagan metal scene who we feel great kinship with. They have already played with us on our small visit to the UK earlier in the year so we feel it’s about time Irish fans got to see an honest and strong English band

Grave Miasma represent the new old school of death metal that delves back to the source and takes inspiration from the old bands but adds a new, dark and sepulchral angle. Without a doubt one of best and most promising new death metal bands playing the true way

For many years Primordial had been compared to Solstafir and finally this year we got the opportunity to tour together and spend a lot of time living in each other pockets. Inviting them all the way from Iceland was a no brainer and people at Redemption can be assured the live Solstafir show is one of the best on the planet right now….

This may seem like a hometown decision as it’s no secret we are long time friends of Rotting Christ and used to write with them back in the early 90s but they represent something close to our hearts, a band also on the periphery of Europe who have had to struggle and fight twice as hard as other European countries to be respected….the Greeks say they are the Irish of the south so Rotting Christ are like brothers and specially for Redemption they will play an old school set only of songs from the demo to Triarchy.

For more information go to:

Tickets can be bought through

BUY IT HERE FOR £6.66: http://www.play.com/Search.html?searchstring=primordial+redemption&searchsource=0&searchtype=allproducts