Following on from the acclaimed ‘Follow Me’ album, Swedish quintet LIV SIN, led by the unmistakable vocals of Liv Jagrell (Sister Sin), the band return with the powerful and hard-hitting album ‘Burning Sermons’. Channeling their love of classic heavy metal with a bruising modern edge, ‘Burning Sermons’ is a riff-heavy collection; showcasing the band’s innate ability to match melody with aggressive metal with ease. Liv is in particularly fine form throughout, with a voice equally capable of capturing your heart as it is knocking buildings to the ground!

Produced by Emil Nödtveidt (Deathstars) in Black Syndicate studio, Liv comments on their decision to work with Emil; ‘We wanted to explore a more modern sound with some synthesizers on this album. I think that this album might surprise a lot of our fans. I have known Emil for many years, so it was really fun to reconnect. The first moment he sent us his ideas of our demos I was delirious!’

Burning Sermons will be released September 6th, 2019 via Despotz Records.

‘Chapter of the Witch‘, the third single from the album, was released August 9th, watch the lyric video below.

The band comments about the single;
“‘Chapter of the Witch’ symbolize the hopefully soon to be entering into a new era which will be powered by female forces, and give more balance to the world” – Liv Sin

LIV SIN venture into a new chapter with ‘Burning Sermons’. An album that might surprise their fans initially as the quintet dive deeper into darker riffs with the addition of electronics, but they will definitely love the unforgettable hooks and the more pronounced melodic edge of Liv Sin, 2019!

Swedish heavy metal band LIV SIN – featuring former Sister Sin vocalist Liv Jagrell – have entered the studio to record the follow up to their 2017 debut album ”Follow Me”. For the upcoming second album the Swedish quintet has chosen to record with producer Emil Nödtveidt (Deathstars) in Black Syndicate studio.

When asked why the band came to choose Emil Nödtveidt as producer, singer Liv Jagrell states: ”We wanted to explore a more modern sound with some synthesizers on this album. I think that this album might surprise a lot of our fans. I have known Emil for many years, so it was really fun to reconnect. The first moment he sent us his ideas of our demos I was delirious!”

The band recorded their debut ”Follow Me” with Stefan Kaufmann (Accept & U.D.O.) and had guests including Jyrki 69 (69 Eyes) and Schmier (Destruction). The sound had a classic metal vibe with Liv’s aggressively piercing yet melodic signature vocals.

Guitarist Chris Bertzell explains how the song writing process differed from their debut: ”For the first album Liv Sin was only Patrick, Liv and Per. Now we have spent two years together as a complete band of five on the road and in the studio. Along with more songwriters the band has evolved into having a lot more attitude and catchy melodies.”

SISTER SIN check in with the following band news:

“We’re coming to you with some bad news today…. (Frontwoman) Liv (Jagrell) has had issues with her voice starting way back in 2007-2008 and it turned out to be a node on her vocal chords. To avoid surgery she has been very strict with warmups, vocal exercises and whatnot, but never the less things have taken a turn for the worst lately.

After re-visiting her doctor last week it became apparent that surgery is now needed and unavoidable. So, it is with great regret we are forced to cancel the announced shows and planned dates for the rest of the year.

“This is very common amongst singers and expected recovery is only two months so we will be back stronger than ever in early 2013 and for the upcoming US tour in February.

Cant wait to see you all again on the road and thank you all for your understanding and support!” 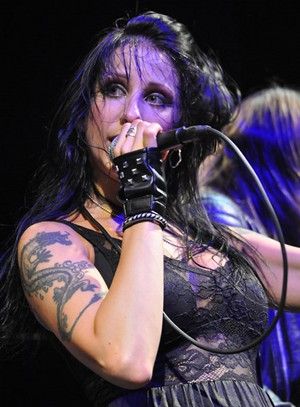 Sister Sin recently released their official video for the Now And Forever album track, ‘End Of The Line’. Check it out below:

On July 6, Aniruddh “Andrew” Bansal of Metal Assault conducted an interview with vocalist Liv Jagrell of Swedish heavy rockers SISTER SIN at the Key Club in Hollywood, California. You can watch the chat below.  Source: Blabbermouth.net

The Mighty Z of Capital Chaos conducted an interview with vocalist Liv Jagrell of Swedish heavy rockers SISTER SIN when the band played at Ace Of Spades in Sacramento, California on April 24. You can watch the chat below. Also available is performance footage from the Sacramento concert. Source: Blabbermouth.net