Stockholm, Sweden 3-piece old-school death metal band Malfeitor originally formed in 1990 and remained active until 1995 when they went on hiatus. Fortunately for fans everywhere, in 2010 the beast emerged from its lengthy slumber and now, 22 years since forming, their debut full-length Dum Morior Orior is set to drop in April/May (on CD via Hellthrasher Productions and LP via Chaos Records). Until then, anxious fans can check out this promotional video for the song “Conversation in Minor” made by band member Benny Moberg. Watch the teaser at Puregrainaudio.com, in Exclusive Premiere. 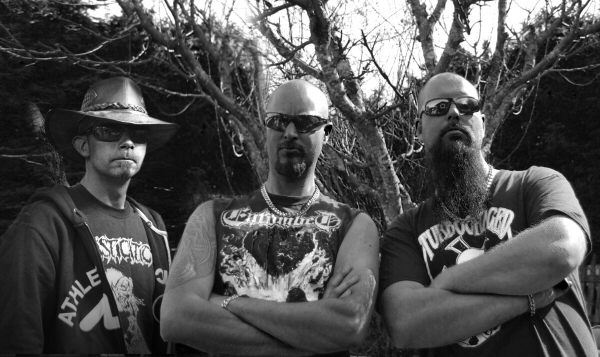 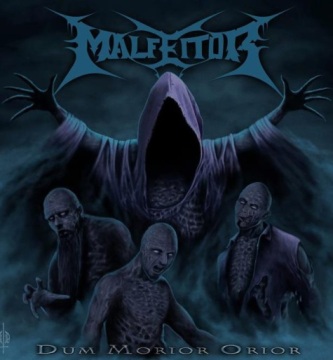 Swedish death metallers MALFEITOR have completed recording their new album, “Dum Morior Orior”, for a spring release via Hellthrasher Productions (with the vinyl version to be made available through Chaos Records).

The CD will feature the following track listing:

After MALFEITOR split up in 1994, Benny Moberg and Mattias Parkkila started BLOOD MORTIZED as an old-school Swedish death metal band in an effort to recapture a small shade of Tomas Skogsberg‘s famous Sunlight sound.

In 2010, Moberg decided to leave BLOOD MORTIZED and focus on the resuscitation of MALFEITOR. What we now will hear is a more intense, faster and brutal version of MALFEITOR, with influences from such acts as IMMOLATION and DEICIDE. Source: Blabbermouth.net 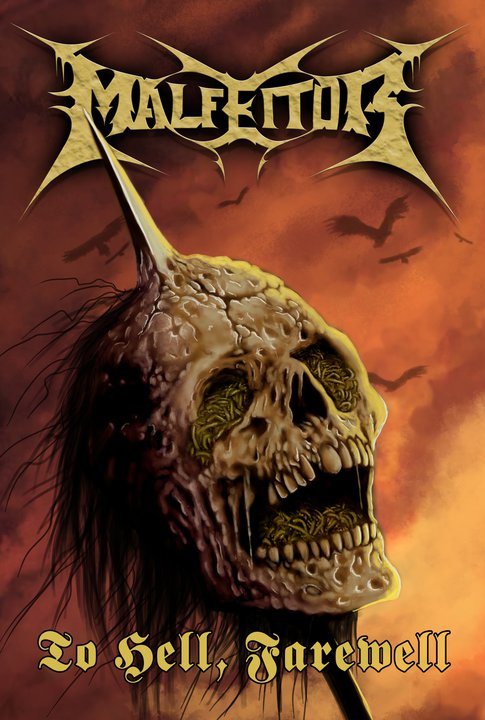 Back to the fundamentals.
When the cellar were slimy of sweat, when all the walls were malted saliva and covered with posters in the colours of Possessed or Napalm Death, when worms filled abandoned residues of sandwiches…you know, when you are the rage in the stomach, you’re not hungry…

Returning therefore after the break in the mid-1990s voracious MALFEITOR, hungry as hyenas, hacked to pieces with barbed grunts and with murderous rhythmic banging our vertebrae without mercy. Presented as a limited demo you can order directly on tillyoufukkinbleed@wp.pl. The 6 titles, including the bonus “the bread Collector” are making your face to rasp against a plaster wall, and here I’ve used yet a very simplistic term.

If you look well, you can see my ears bleeding…both for the auditory rape to reduce sensations and for danceable Venom or Terrorizer, this impression of luxury, calm and voluptuousness…

Brutal! and then the production ad hoc, the Swedish made “To Hell, Farewell” reappears enjoyable memories, this time Death Metal is to relieve its glorious elders (from Black Sabbath to Thrash-Metal) and to widen the solid foundations of today, major and ever resurgent (from Death to In Flames).

Here are its roots, raw and bloody.

Infantry without mercy the upcoming album entitled “Dum Morior Orior” has been announced for the first quarter of 2012, and it may be already defeated.  Intensive bombardment of these 6 titles will not leave no survivors. Infuriate as the U.S. combos (Deicide or Immolation) and frosty as the waters of the Baltic Sea, these chromatic bandits manage their hold-up and we abide thus in a position of unbearable wait when their next musical mischief.

Death, The dead and me, a program.
Visceral Metal

CHAOS RECORDS has issued the following:

Chaos Records is proud to announce the signing of swedish death metal band MALFEITOR for the release of their new full-length album, “Dum Morior Orior” vinyl LP version, during the first quarter of 2012.

No official demo’s was made, but they did some gigs together with bands like DESULTORY, EXCRUCIATE, MORPHEUS.

After MALFEITOR split up in 1994, Benny Moberg and Mattias Parkkila started BLOOD MORTIZED as an old-school Swedish death metal band in an effort to recapture a small shade of Tomas Skogsberg’s famous Sunlight sound.

In March 2011, Janne (Rudberg) Björkenfjäll (EXCRUCIATE, MASTICATION, EXHUMED) joined the band to beat the hell out of the drums!

“Dum Morior Orior” CD version will be released through Hellthrasher Distribution from Poland.

HELLTHRASHER PRODUCTIONS has issued the following:

Interview with MALFEITOR: “Evil Doer” is back! Crank it!

Swedish brutal death metal band MALFEITOR, was formed in 1990 and was active up till1995, then after 15 years’ break the beast was awakened in 2010. Some days ago I talked with Benny Moberg, the band’s founder, and I asked him about the past, today and about the future…

Hej Tarja! Tack! I’m currently having an enjoyable vacation, relaxing with a few beers in the sun.

We could talk about many bands and projects where you’ve played so far, but let’s just touch the topic listing them… and tell me from which band you’ve the biggest memories (leaving out Malfeitor)… and why?