METALLICA have postponed their upcoming tour in Australia and New Zealand, read below the band’s statement, issued via their Official Facebook Page:

“A Note from Lars, Kirk, and Rob

We are truly sorry to inform our fans and friends that we must postpone our upcoming tour of Australia and New Zealand.

As most of you probably know, our brother James has been struggling with addiction on and off for many years. He has now, unfortunately, had to re-enter a treatment program to work on his recovery again.

We fully intend to make our way to your part of the world as soon as health and schedule permit. We’ll let you know as soon as we can. Once again, we are devastated that we have inconvenienced so many of you, especially our most loyal fans who travel great distances to experience our shows. We appreciate your understanding and support for James and, as always, thank you for being a part of our Metallica family.”

All tickets purchased to the shows in Australia and New Zealand, including Enhanced Experiences and Black Tickets, will be fully refunded. More details on how to obtain your refund are below.

It’s pointless to tell you how much I love this song.. I always thought “How this song could sounds with a heavier drum part beneath? Could it sounds better? Could it sounds worse? Here you can listen it 🙂 Personally I love both versions, the original and this one too! 🙂 Of course I love Lars’s playing, my drumming just sounds totally different from his.

I recorded this song with my life’s friends Braindamage and I thanks Andrea Signorelli & Gigi Giugno for the huge help they gave me to record this killer version of this amazing song. Biggest thanks goes also to Damien Rainaud, who mixed this song (doing a great job :)).

The drums has been recorded in one take (as usual is in all my drum videos) no camera’s “switch-views” to hide mistakes, only sweat ( as you probably will notice in the video ;D relax, endurance, control and hard work.

Tips for new Youtube drummers : Don’t waste your time in video editing, more editing you do, more your drumming looks fake and the drum cover useless, play drums at the best you can instead , try not to do mistakes from the beginning till the end of the song, in this way, while you are recording the video you are also learning how to play drums, and this is the useful part.

Keep up the good and hard work! Subscribed to my channel, and feel free to share this drum cover wherever you want. Horns up Metalheads!

Cheers and I’ll see you in tour with DragonForce!

Posted by tarjavirmakari on July 19, 2019
Posted in: Int. News, News. Tagged: "Ride The Lightning", '…And Justice For All', 'Kill 'Em All', Master Of Puppets, Metallica, Zee Productions. Leave a comment

The iconic art of some of Metal’s most influential and highly regarded albums, will be presented in puzzle form for the first timeever. Zee Productions will release the first four classic METALLICA album covers as 500 piece jigsaws: “Kill ‘Em All”, “Ride The Lightning”, “Master Of Puppets” and “And Justice For All” will be released on September 20th. All puzzles come in a vinyl box set sized box, that will fit alongside vinyl record collection. 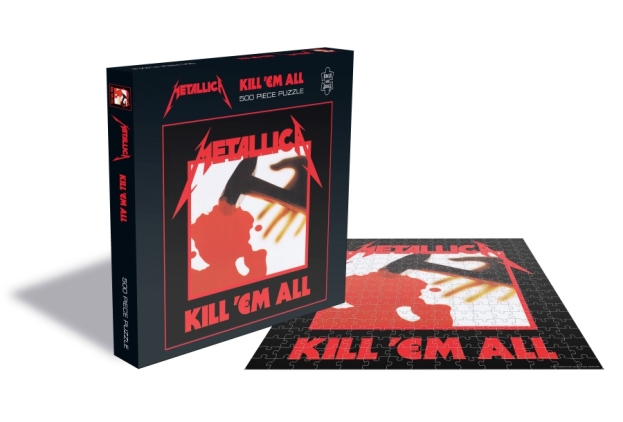 Anthony Vincent of Ten Second Songs has released his newest video, METALLICA‘s “Enter Sandman” in 20 Styles. His newest auditory kaleidascope rendors the metal classic in the style of such diverse bands as Owl City, John Denver and The Doors as well as exploring genres as varied as lo fi hip hop, Yodeling, and Synthwave.

MEGADETH’s Dave Ellefson: “I was on METALLICA’s short list when Jason Newsted quit in 2001”

Jimmy Kay from Canada’s The Metal Voice spoke to MEGADETH‘s bassist David Ellefson about his new album with his side project ALTITUDES & ATTITUDE titled ‘Get it out’ (with Anthrax’s Frank Bello), his upcoming book ‘More life with Deth’, the direction of MEGADETH‘s new album, his upcoming induction into the Hall of Heavy Metal History, METALLICA‘s short list when Jason Newsted quit and his upcoming Bass History tour.

When asked about his side project with Frank Bello of Anthrax, called Altitudes and Attitude and their new album
“This side project is an addition to Megadeth and I think that is why the fans like it and embrace it. I have played on a lot of records so fans are used to hearing different sides to me. For Frank Bello, what is cool for him is that he is the singer on this project, so you really get to hear a different side to Frank. Musically it is very different it is not a thrash metal record, it’s got some powerful hard rock drive to it but it also an emotional side. The album has sensibilities to it, it is not just a freight train Heavy Metal by any stretch.”

When asked about his upcoming induction into the Hall of Heavy Metal History January 23 2019 in Anaheim California
“Last year I inducted Nick Menza into the Hall, it was great because his family was there and it was a special privilege and honour especially since Nick is no longer with us. So this year when the Hall’s CEO Pat Guesaldo contacted me for the induction, I thought it was great and super cool. The Hall does a great thing, they are honouring and inducting a lot of cool artists. They are inducting the Ozzy Osbourne Blizzard of Oz artists, drummer Lee Kerslake and bassist Bob Daisley, also my friend Mike Portnoy ex Dream Theater and so many more great musicians. I am especially looking forward to meeting Lee Kerslake (who recently told The Metal Voice he had 8 months to live due to cancer) who did the drumming on Ozzy’s first two albums, Blizzard of Ozz and Diary of a Madman, because those two albums changed my Life. Those two albums were very influential to me as a teenage musician.”

When asked about the musical direction of the upcoming new Megadeth album
“We have been really trying to re frame the band, there have been a few records in the past years that really hit the mark well. I thought Dave did a great job on the Endgame album, 13 Album was an album that I played on when I came back into the group I thought was a really good strong record. So as we talk about this next record we said Dystopia is the bench mark, it seems to be what fans like to hear. A combination of melodies, amazing playing and the thrash stuff a kind of a greatest hits of everything Megadeth has ever done. All this can be heard on Dystopia. To early to say what it will sound like but Dystopia is a benchmark for us.”

When asked if in 2001 when Megadeth disbanded and when Jason Newsted left Metallica, did he ever get a call to join Metallica to join the band
“Metallica didn’t call me, I do know know there was a conversation about considering me. I know I was on Metallica’s short list. ”

When asked about his upcoming new book More life with Deth
” It will be released next summer around the Ozzy Megadeth tour. It talks about me leaving Jackson, Minnesota and going off to Hollywood, I also include the things we doing today with my business partner Thom Hazaert, EMP label group, Combat Records, Ellefson Coffee Company, the Grammies with Megadeth, Dystopia there has been lots that happened since the last book when it came out. Also I go into a lot of Megadeth’s history that wasn’t been talked about on my last book.”

ALTITUDES & ATTITUDE’s debut album, “Get It Out”, which will be released on January 18, 2019 via Megaforce. The follow-up to ALTITUDES & ATTITUDE’s 2014 self-titled EP was once again produced by Jay Ruston (ANTHRAX, STEEL PANTHER, STONE SOUR), with Jeff Friedl (A PERFECT CIRCLE, ASHES DIVIDE) returning behind the kit

Ellefson will release “More Life With Deth”, the follow-up to his memoir “My Life With Deth”, in 2019 . The book was co-written by his business partner, radio personality and music journalist Thom Hazaert.

Monday, September 24, 2018 — It is announced that Grammy-winning, Swedish rock band GHOST will be Special Guest on all four European legs of METALLICA’s 2019 “Worldwired” Stadium Tour that begins on May 1 at the Estadio do Restelo in Lisbon, Portugal. GHOST has shared festival stages with METALLICA before, but this is the band’s first  invitation to join METALLICA on tour.  With Norway’s Bokassa opening all dates, the three-band bill will play 25 stadiums from May through August.  Tickets go on sale Friday, September 28 at 10AM local time.  Log on to http://www.ghost-official.com for all purchasing details.

Prior to joining Metallica for the summer 2019 European stadium tour, Ghost will headline its own “A Pale Tour Named Death” tour, first in North America kicking off October 25 in Dallas, Texas, and then in Europe beginning February 3, 2019  in Lyon, France.  All Ghost headline shows can be accessed here.

In North America, Europe and elsewhere around the globe, 2018 continues to be an extraordinary year for Ghost. Since its June release, the band’s fourth full-length album Prequelle has been streamed north of 75-million times. The album’s first single, “Rats,” had accumulated more than 25-million streams and set a 2018 record for maintaining the #1 spot for nine consecutive weeks at U.S. Rock Radio. The companion music video for “Rats” has logged more than 12.5 million views in the U.S. alone. Earlier this month, Ghost played to a sold-out house at London’s Royal Albert Hall. As the UK’s Kerrang! wrote in its review, “Tonight is nothing short of devilishly incredible, largely because it’s impossible to pick a standout moment from a set inundated with them.”