Posted by tarjavirmakari on May 28, 2019
Posted in: Int. News, News. Tagged: "Towards the Greyscale Aphorysm", Misanthropic Rage. Leave a comment 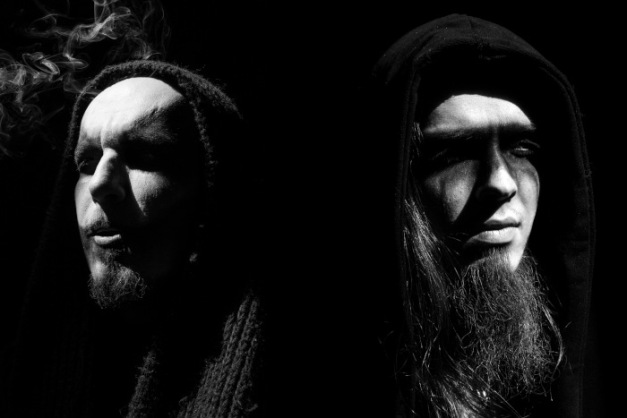 Despite the excellent artwork, there’s nothing black and white about this album… Taking up where they left off, the authors of “Igne Natura Renovatur Integra” bring forth eight brand new incantations that make up “Towards the Greyscale Aphorysm”, MISANTHROPIC RAGE‘s third full length release. Going further and beyond in their musical explorations, the duo strike again with their seminal, flawless, avant-garde black metal full of memorable moments, passages and melodies. An overwhelming creation, suppressing all the senses and piercing through the subconscious. A compelling opus accompanied by most intriguing lyrics. Within just a year, AR. and W. return with an album that will definitely leave no innovative and original black metal fan cold. A true must for all the open-minded listeners.

Regarding the new album, the band comment: “Mankind’s existence lack plain black or white directions, and world deserves nothing more than neverending greyness. What was once burned to the ground will regrow and reform. Without any goals, any guidelines and any authorities, we choose to remain travellers, marching towards the greyscale aphorysm.”

“Towards the Greyscale Aphorysm” is scheduled for a release on 6th June 2019 as standard jewel case CD with a twelve-page booklet and in digital formats through Godz Ov War Productions.

All recorded by AR., mixed by AR. and Robert Srzednicki at Serakos Studio. The cover art and layout were created by Maciej Kamuda, and the logo was craftfully designed by Christophe Szpajdel.

Check out “Nothing but Rage” and “The Traveller” on Bandcamp and preorder your copy right away at this location.

Track list:
01. Towards the Greyscale Aphorysm
02. The Noise of A New Dawn
03. Nothing but Rage
04. The Luring Lament
05. Divine Malediction
06. Here Is Deeper, Here Is Higher
07. The Traveller
08. Curse~Despise~Reject~Deny 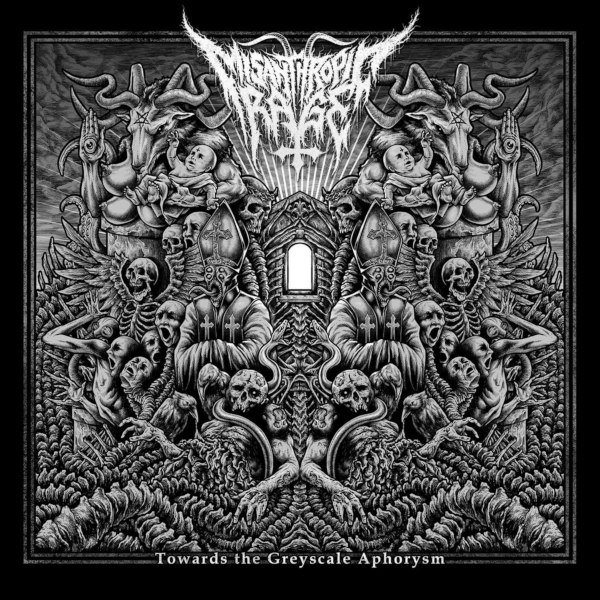 ‘Igne Natura Renovatur Integra’ contains nine premiere compositions being a natural development of the style followed in the previous materials though this time, in terms of music and lyrics, the band have presented a much more mature and personal face. If you haven’t checked out the single promoting the new album, ‘The Hammer and The Nails’, do it now:

The release will be available as a regular, standard jewel case CD, and as an exclusive slipcase CD with a patch limited to 100 copies. In addition, there will be a digital version to be downloaded from the label’s Bandcamp profile on the release date. Physical copies of ‘Igne Natura Renovatur Integra’ can available be preordered on the label’s website: http://www.store.godzovwar.com 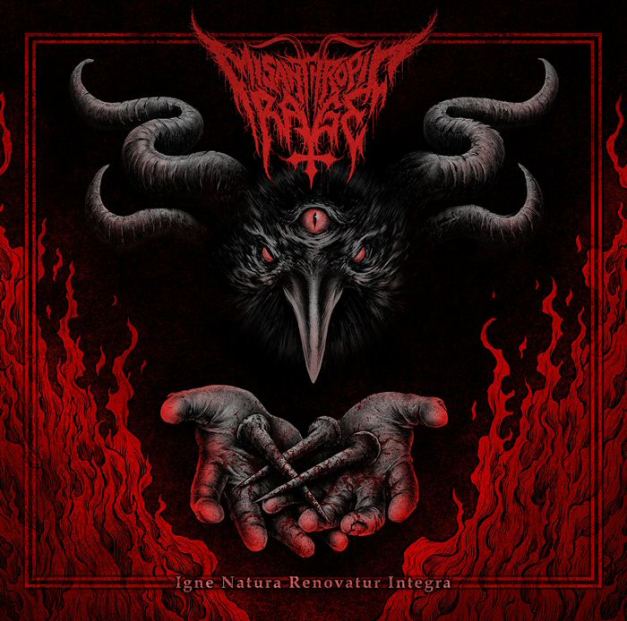 Avant-garde/black metal duo Misanthropic Rage are back with their second full length album entitled ‘Igne Natura Renovatur Integra’ which is going to be released on March 12, 2018 by Godz Ov War Productions.

Enjoy the first track entitled ‘The Hammer And The Nails’:

In nine new songs lasting more than fifty minutes, the band again takes listeners on a musical journey full of extraordinary sounds, twisted arrangements and rhythmical mind-bending tricks. Irrepressible melodic lines and sophisticated, bilingual vocal parts are not only to enrich the intricate structures of individual tunes, but also to dramatically enhance the cold atmosphere and monumentality of the entire album. Prepare your mind for a lethal dose of emotional anxiety covered with a pinch of irritation and decadence!

The band say about the new album: “I.N.R.I is a natural follow up to our debut album. With our first album, we have the gates before us; today, we confidently walk the path we have chosen. This time, we’d had a certain concept, a main thought since the very beginning, and it was then bound by words and sounds. Less madness, more cold premeditation. It’s a flame which we carry to the world. It’s misanthropic rage!” 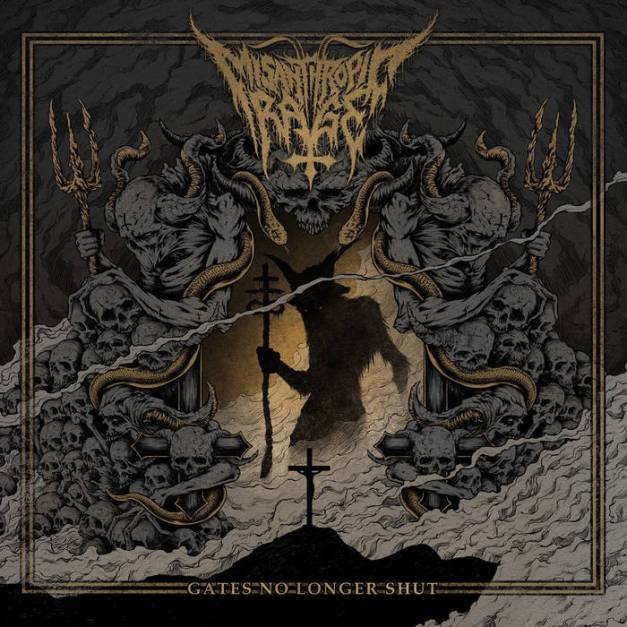 More about Misanthropic Rage, as written by Nathan T. Birk:

“A duo hailing from Poland, Misanthropic Rage are a literal whirlwind of avant-garde black metal. Aptly titled, Gates No Longer Shut is a 40-minute firestorm of frayed logic, feverish frequencies, and ceremonial magick. With dissonant riffing colliding with spiraling melodies, down-tempo trudges giving way to tornadoes of hypnotic speed, scabrous blackened vocals fighting with clean-toned exhortations, Gates No Longer Shut entrances the listener with a continual, torturously twisting push ‘n’ pull. Within, Misanthropic Rage embrace the slipstream, weaving cryptic tales across thoroughly seamless songwriting, and yet never losing sight of each song’s emotional center. Similarly, the duo remained grounded firmly within black metal, but caring enough to push its boundaries in a respectable, reverential manner, never getting caught up in trendy “post” this or that, instead nodding to the pioneering days of Moonfog during the late ’90s. Indeed, the past is alive with Gates No Longer Shut, and Misanthropic Rage are the future!”

Within, MISANTHROPIC RAGE embrace the slipstream, weaving cryptic tales across thoroughly seamless songwriting, and yet never losing sight of each song’s emotional center. Similarly, the duo remained grounded firmly within black metal, but caring enough to push its boundaries in a respectable, reverential manner, never getting caught up in trendy “post” this or that, instead nodding to the pioneering days of Moonfog during the late ’90s. Indeed, the past is alive with ‘Gates No Longer Shut’, and MISANTHROPIC RAGE are the future!

Tracklist:
1.In A Blind Dimension
2.Gates No Longer Shut
3.I, The Redeemer
4.Into The Crypt
5.Niehodowalny
6.Cross Hatred
7.I Took The Fate In My Hands

Before the album premiere, you can listen to a two new tracks – ‘In The Crypt’ and ‘Gates No Longer Shut‘, at this location. 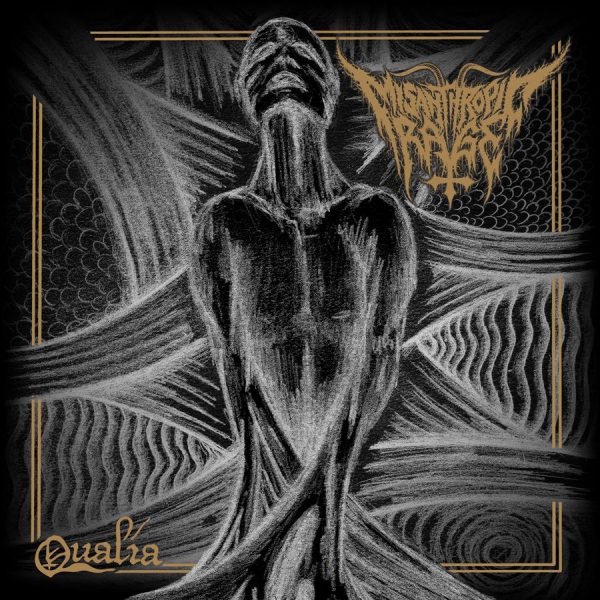 Polish avant-garde black metallers MISANTHROPIC RAGE have announced the release of their upcoming full-length album, Gates No Longer Shut. The new material will be released through Godz ov War Productions in November 2016 and follows the dark experimental path which was paved by the recently spawned EP, Qualia.

Get a taste of Gates No Longer Shut by listening to a brand new track via Soundcloud:

The band comments: “Gates No Longer Shut” contains 7 diverse tracks, based on Black Metal we took it much further, exploring the sound created by every day inspirations. It is also literally the Gates that we opened before us, the Gates that drive us away from all boundaries, opening to our own world, both musically and philosophically. It is our entrance through which we gladly step tall and proud.”