Vocalist Somi Arian from London based metallers MORTAD has announced via the band’s official Facebook page that the release of their next album has been delayed:

“Hey Mortad monsters, Somi Arian here! Due to unforeseen circumstances to do with our management company and legal issues, the release of our new album has been delayed. Unfortunately we know as little as you do about the future of the album and the band..! In the meantime I have decided to pursue my career and creativity in filmmaking and possibly other musical endeavour! My other bandmates are also pursuing other creative means for the time being. As soon as we have news we will come back to you, until then keep on rocking…! \m/”

The band released a new track ‘Pitch Black’ in November 2014 after launching a successful Kickstarter campaign for the album.

London based metallers MORTAD have released a new track, ‘Pitch Black’. The band posted the video for the song on their official Facebook page, stating:

“Well people… Here it is…. PITCH BLACK
Massive thanks to all of you who supported us through Kickstarter, and to everyone out there who has been so patient. We want this out as much as you do!!!
Anyway, as soon as we have any news, you Monsters will be the first to know, in the meantime, get your windmill on to this!”

Check out the video:

UK metallers MORTAD have launched a Kickstarter campaign, for donations towards the shooting of music videos for their upcoming album, which is due for release this year.

“Hey Mortad monsters, so we are shooting music videos for a few tracks of the new Mortad album in April. Should you wish to donate a small amount towards this, we have thought of some exclusive gifts to thank you for your support. Please check the project link here on Kick-starter and please share it with as many of your friends as you can to help us meet our goal! \m/”

For more information about how to donate and to see some clips about recording the new album, visit the Kickstarter page at this location.

There are 27 days left of the campaign if you wish to contribute. 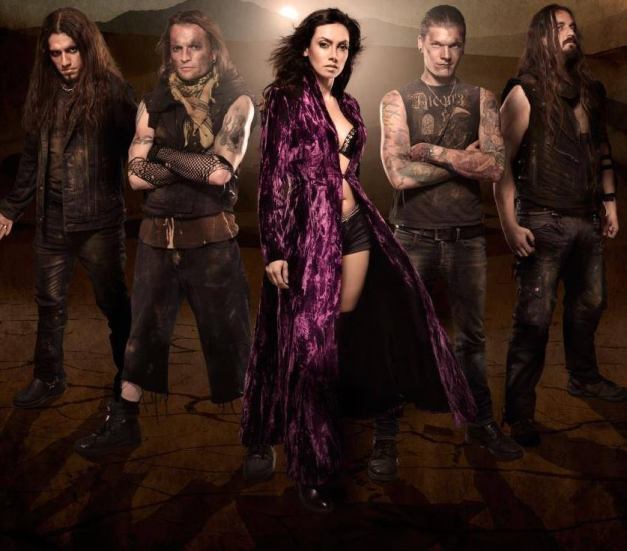 MORTAD vocalist Somi Arian has posted a video discussing her past due to many fan questions. The following was posted on her the bands official Facebook page:

“So how much do you Mortad monsters know about the impact of heavy metal music on people’s lives in more closed countries, specially in the Middle East? In this video Somi Arian gives you an insight into her life and background in Iran and how she got into metal music! \m/”

MORTAD are due to release their new album soon, check their Facebook page for updates.

If you want to be a winner, you just need to write a brief description of “What Halloween means to you?” So fill in all requested details on the forms below.

Legendary Teutonic heavy metallers ACCEPT released their newest masterpiece album, “Stalingrad” in April 2012 via Nuclear Blast Records. The new songs still capture that great classic ACCEPT sound. The band are currently on their European fall tour and they are seriously shaking the ground with their metal awesomeness. To know more about ACCEPT tour dates click HERE.

UK metallers MORTAD released their debut album “The Myth Of Purity” earlier this year with producer Russ Russell. The album received rave reviews and was supported by a recent successful UK tour, which gained many new fans. MORTAD have already begun working on a new album, so stay tuned! For more info about MORTAD click HERE. 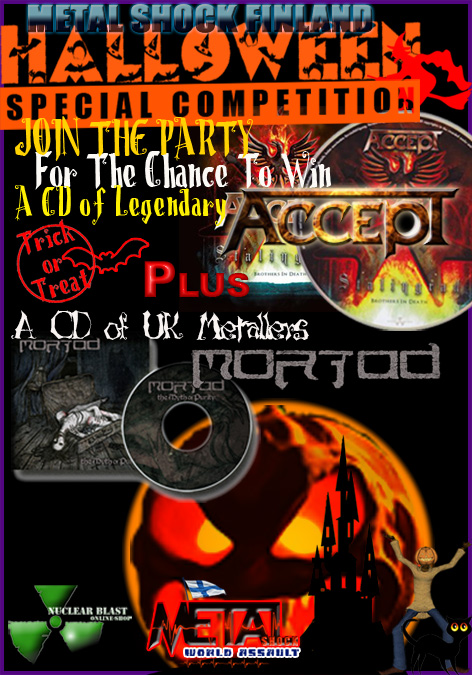 Posted by aliblackdiamond on May 7, 2012
Posted in: Int. News. Tagged: Mortad. Leave a comment

London, England-based, female-fronted metallers MORTAD are seeking a second guitarist. Interested parties can contact the group at MortadAuditions@gmail.com. More information is available on the flyer below.

MORTAD‘s “The Voice” video can be seen below. The song comes off the band’s debut album, “The Myth Of Purity”, which was made available with the February 2012 issue of Metal Hammer magazine. The CD, which will receive a more “official” release later in the year, was recorded last October with producer Russ Russell (NAPALM DEATH, DIMMU BORGIR, EVILE).

“The Voice” honors the memory of Neda Agha Soltan, a young Iranian woman who was killed during the pro-democracy up risings in Iran in on June 20, 2009.

MORTAD will release a follow-up video explaining the song, the making of the video, Neda‘s life and the Iranian freedom movements on June 20.

Commented MORTAD frontwoman Somi Arian, “Lyrically, ‘The Voice’ is the most important song in ‘The Myth Of Purity’ album, also the only song that contains some Persian lyrics. I felt that I had something to say, I want to be ‘the voice’ of the voiceless and to honour the memory of thousands of men and women who lost their lives in a battle to revive the basic human rights for others.”

“The Myth Of Purity” track listing:

MORTAD was formed in 2009 by Iranian vocalist Somi Arian , whose lyrics take aim at the hypocrisy of religion and the government as well as seeking inner truth and strength in the face of such oppression.

MORTAD released a music video and an EP, entitled “Pandemic Paranoia”, in early 2011. This effort brought the band immense attention on the social media sites, placing the group as the No. 1 metal band on ReverbNation London metal chart, and attracting over 40,000 Facebook fans.

MORTAD‘s “Waste Of My Rage” video was sponsored by the Alchemy apparel clothing brand and produced by the Manchester-based video production company Video Ink. More than a dozen actors were cast for the clip, including Collette Von Tora, who agreed to have her head shaved for this video shoot.

MORTAD will enter the studio in November with Russ Russell to begin recording its sophomore album for a 2013 release.