NECROPHOBIC Announce Re-Release of “Spawned By Evil” for November 11th

Swedish Black & Death metal force NECROPHOBIC announce the re-release of “Spawned By Evil”, which originally came out in 1996 as four track EP. To perfectly extend the re-issue series that started earlier this year with  “Hrimthursum” and “Death To All”, followed by “Satanic Blasphemies” and the recently launched “The Nocturnal Silence”, this time the band decided to release a strikingly longer version of “Spawned By Evil”.

In addition to the 1996 released title track “Spawned By Evil” and the three cover tracks – “Die By The Sword” by Slayer, “Nightmare” by Venom and “Enter The Eternal Fire” by Bathory – this re-issue features two previously unreleased tracks from 1994 and additional cover versions such as Autopsy’s “Ridden With Disease”, Iron Maiden’s “Moonchild” and Celtic Frost’s “Into The Crypts Of Rays”.

Band founder and drummer Joakim Sterner about this special version of “Spawned By Evil”,
“The reason why we did this release in the first place, back in 1996, was that it had taken a bit longer time to come up with a follow up album to ‘The Nocturnal Silence’. We were pretty much ready, but needed to write maybe 3 more songs to have a full album, so we thought it was good to record one new song (‘Spawned by Evil’) to have it like a teaser and to show our fans what to expect on ‘Darkside’.

Around this period, it was popular to record cover versions for different tribute albums and we were asked to be represented for a Bathory tribute and a Slayer tribute, so we included those songs as well. We also chose to record a cover of Venom, as they are old heroes to us and also to have 4 songs in total and have it released as a mini album or a maxi single, whatever you call it.

Later, we were asked to be represented on 2 other tribute albums and we recorded cover versions of Autopsy and Iron Maiden.
They were never intended to be released elsewhere, but a former label released ‘Spawned by Evil’ again and included those covers as well. They also got their hand on a never before released demo recording we did in 1994, with the songs ‘Black Moon Rising’ and ‘The Call’. So, all of a sudden, this original 4-song release was now an album, with 3 Necrophobic songs and 5 cover songs.

Last autumn (2021), I was searching for old tapes, as we started work on all the re-issues that is being released this year, and one day I found an old tape from 1994. A demo recording of ‘Darkside’ and a Celtic Frost cover of ‘Into the Crypts of Rays’ that was never heard of or spread before to the public, so these 2 songs are really exclusive and unreleased before for this re-issue of ‘Spawned by Evil’.

I hope you will enjoy this re-issue of ‘Spawned by Evil’!”

“Spawned By Evil” was remastered by Dan Swanö at Unisound and is going to be released through Century Media Records on November 11th , 2022. It will be available as Ltd. CD Jewelcase in slipcase, LP including LP-booklet & double-sided A2-sized poster and as digital version.

Swedish black/death metal pioneers NECROPHOBIC, announce that their highly acclaimed album “Hrimthursum”, which was originally released in 2006, is digitally available again on all streaming and download platforms as of now. A Ltd. CD Jewelcase in slipcase and a Gatefold LP version with double-sided poster will be released through Century Media Records on February 11th, 2022.

Here are the vinyl variants available for “Hrimthursum”:

Click HERE: https://necrophobic.lnk.to/Hrimthursum-ReIssue2022 to listen to ”Hrimthursum” or to pre-order your physical copy of the album.

The official video to “Blinded by Light, Enlightened by Darkness” from 2006 directed by Magnus Göthlund can be watched HERE:

This new edition of “Hrimthursum” marks the start of a series of long overdue digital and physical re-releases of the band’s entire back-catalogue. Each of the nine releases will be available as Digital Album, of course on vinyl and as CD Jewelcase in slipcase, so watch out for more to come soon!

The band states: “We are pleased to announce the beginning of a comprehensive re-release campaign for the entire NECROPHOBIC catalogue via our label Century Media Records. We will be re-issuing the best possible editions of all our previous releases throughout the next year, starting with the long awaited “Hrimthursum” and then “Death to All”. All re-issues will come true to the original versions but optimized for the LP/CD/Digital formats and are fully endorsed by the band (unlike some of the previous versions…) as well as assembled by us. We can’t wait to get these records available again. Thank you for the support!”

NECROPHOBIC’s latest studio album “Dawn of the Damned” was recorded and mixed by Fredrik Folkare (Unleashed, Firespawn, etc.) and once again came with artwork by Kristian “Necrolord” Wåhlin. The album was made available as Ltd. 2CD Mediabook & Patch, Gatefold colored & black LP on 180g vinyl with LP-Booklet & Poster, Standard CD Jewelcase as Digital album, and entered the official sales charts in Germany at # 26, Austria at # 35, Switzerland at # 35 and in Belgium (Flanders) at # 44 upon initial release in October 2020. Check out the singles/videos launched for the release HERE:

And you can still order “Dawn Of The Damned” in various formats HERE: https://necrophobic.lnk.to/DawnOfTheDamnedID

And more dates to be announced soon…

“Devil’s Spawn Attack” comes together with an official music directed by Henrik Hedberg & NECROPHOBIC, which shows the band and their special guest vocalist – DESTRUCTION frontman Schmier – performing in the recording studio/s.

NECROPHOBIC comment: “On our upcoming album “Dawn of the Damned” we have got a very special guest appearance by Schmier of DESTRUCTION. Earlier this year when we were working on the album, we felt that one of the songs would fit this legend just about perfectly and we are grateful he accepted our invitation! He made a fantastic contribution on our song ‘Devil’s Spawn Attack’ and here you can see and hear the result in form of a video of our collaboration.”

Schmier (DESTRUCTION) has the following to add: “What a killer tune this is! I heard the song for the first time when the band asked me to check out the track, I was caught right away by the old school approach and the in your face songwriting! Killer stuff and great fun in the studio, I hope the fans will dig it as much as I did when we recorded my part in Switzerland with my buddy V.O. Pulver!“

“Dawn of the Damned”, which was recorded and mixed by Fredrik Folkare (Unleashed, Firespawn, etc.) and which once again comes with artwork by Kristian “Necrolord” Wåhlin, will be available as Ltd. 2CD Mediabook & Patch, Gatefold colored & black LP with LP-Booklet & Poster, Standard CD Jewelcase and Digital album and is ready for pre-order HERE!

Posted by tarjavirmakari on September 3, 2020
Posted in: Int. News, News. Tagged: “Dawn of the Damned”, “The Infernal Depths of Eternity”, NECROPHOBIC. Leave a comment

Swedish blackened death metal legends NECROPHOBIC release the second single, “The Infernal Depths of Eternity”, of their undoubtedly most diverse and elaborated album to date which is entitled “Dawn of the Damned” and will be released on October 9th, 2020 via Century Media Records worldwide.

The stunning video for “The Infernal Depths of Eternity” was created by Costin Chioreanu. Watch it HERE

“Necrophobic and Costin Chioreanu have worked together to bring out the very essence of the new album ‘Dawn of the Damned‘. We wanted to visualise the phases of the opening of the third eye. The serpent’s awakening and the traveller’s shift from flesh to soul.

The song ‘The Infernal Depths of Eternity‘ is the continuation of ‘Mirror Black‘. Where the album‘s first video is about the gateway to the other side, this second video is about when we make contact with the spirit realm through the devil’s crown.

We could not be happier with the result. Costin‘s video art matches the vision we had when writing the songs just perfectly!”

“Dawn of the Damned”, which was recorded and mixed by Fredrik Folkare (Unleashed, Firespawn, etc.) and which once again comes with artwork by Kristian “Necrolord” Wåhlin, will be available as Ltd. 2CD Mediabook & Patch, Gatefold colored & black LP with LP-Booklet & Poster, Standard CD Jewelcase and Digital album and is ready for pre-order HERE. 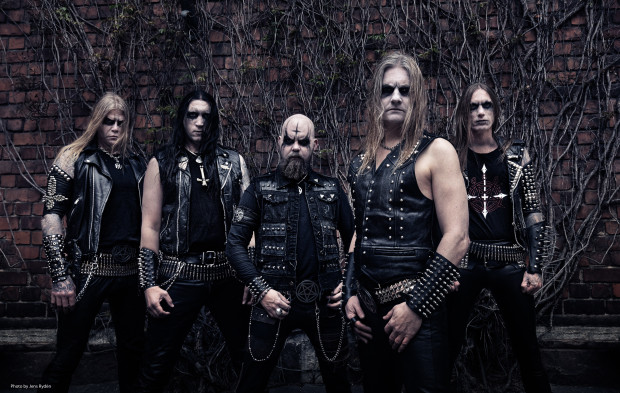 By unleashing the single/ EP “Mirror Black”, Swedish blackened death metal legends NECROPHOBIC are set to kick off the campaign for the release of their undoubtedly most diverse and elaborated album to date “Dawn of the Damned”, which is going to be released on October 9th, 2020 via Century Media Records worldwide.

“Mirror Black” comes together with an official music video created by Magnus Göthlund (Director) and Henrik Christoffersson (Director of Photography). Check it out here:

NECROPHOBIC commented as follows about the clip: “The video for ‘Mirror Black‘ was shot on two different locations in Stockholm. We wanted to manifest the bright and the dark side of the portal to the underworld. The song is about a journey to begin through darkness and fire. This is where the damned takes the final step into the pitch black depths of death. On to the other side where a new dawn awaits.“

“Dawn of the Damned”, which was recorded and mixed by Fredrik Folkare (Unleashed, Firespawn, etc.) and which once again comes with artwork by Kristian “Necrolord” Wåhlin, will be available as Ltd. 2CD Mediabook & Patch, Gatefold colored & black LP with LP-Booklet & Poster, Standard CD Jewelcase and Digital album and is ready for pre-order here: https://necrophobic.lnk.to/DawnOfTheDamned

“Dawn of the Damned” Tracklisting:


The “Mirror Black” EP features a brand new track plus the previously unreleased live recording of classic song “Darkside” and is available in the following formats here: https://Necrophobic.lnk.to/MirrorBlack 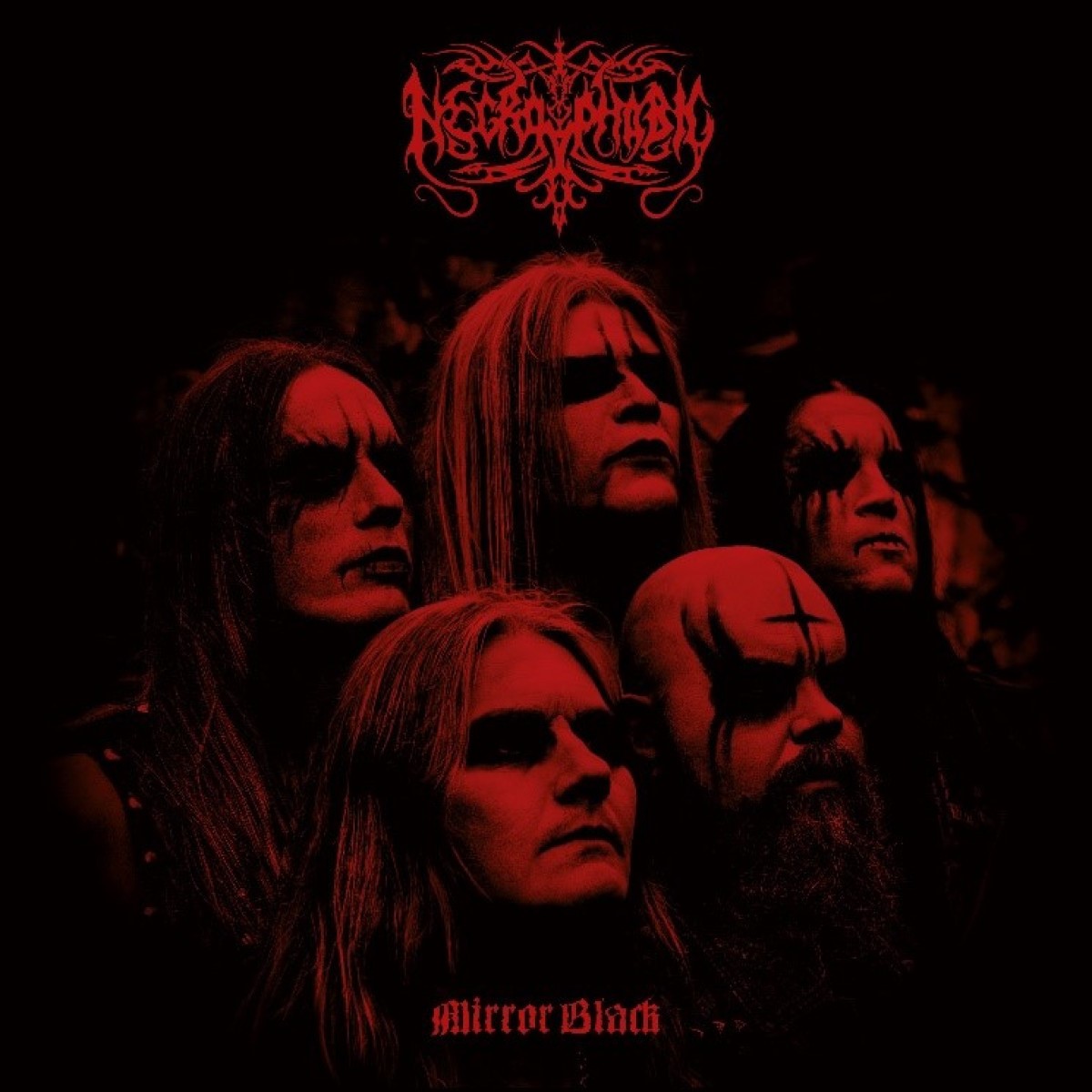 Following the release of their latest, critically acclaimed album “Mark Of The Necrogram” in 2018, Swedish blackened death metal legends NECROPHOBIC return with the release of the new single/EP “Mirror Black” on July 17th , 2020, as start of the campaign for their upcoming new studio album “Dawn Of The Damned”. The “Mirror Black” EP features a brand new track plus the previously unreleased live recording of classic song “Darkside”.

NECROPHOBIC comment: “We look forward to the beginning of the campaign for our new album ‘Dawn Of The Damned’ soon. We will initially have a single launched for the track ‘Mirror Black’. With this song we open the gate to the other side and start a journey through the pitch black depths of death. We also just shot a video for it, so look out. The b-side of the collectible 7″ single includes a live recording from our recent quarantine concert of the song ‘Darkside’. Welcome into the ‘Mirror Black’!”

“Mirror Black” is going to be available as strictly limited 7” vinyl in various colors and on all digital platforms. Pre-order is NOW available here.

The track “Mirror Black” is taken from NECROPHOBIC’s new album “Dawn Of The Damned”, due to be released later this year, so stay tuned for more news to come soon!