If 2012 was a year to remember for ASIA, with the release of the acclaimed studio album, XXX, marking the band’s 30th anniversary, then 2013 is set to be another. John Wetton, Geoff Downes and Carl Palmer are delighted to announce that not only do they have an incredible talent in place to step into guitarist Steve Howe’s shoes, but also that their first international show with newcomer Sam Coulson will be a high profile performance at Sweden Rock 2013. Sam is a wonderful player, world-renowned amongst guitar virtuosos. Additionally, a new studio album, to be entitled Valkyrie, will be recorded for Frontiers Records during 2013 continuing the band’s relationship with the label.

John Wetton said, “Asia is ready to take its next steps along this remarkable road. We cannot wait to perform again for the fans and also to unveil some of the new material, of which we are very proud.”

Geoff Downes said, “We look forward to writing another chapter in Asia’s history.”

Carl Palmer commented, “We’re all looking forward to the next decade of great Asia music.” 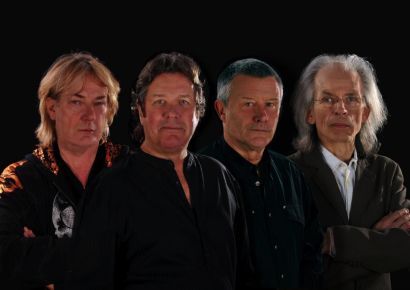 Asia formed as a supergroup of stunning pedigrees, bringing together songwriter, lead vocalist and bassist John Wetton (KING CRIMSON), keyboardist Geoff Downes (YES, THE BUGGLES), drummer extraordinaire Carl Palmer (ELP) and Steve Howe (YES) Their self-titled debut album was the biggest selling album in the world in 1982 and monopolized the #1 slot in the Billboard charts for 9 weeks. The album is still in the top 3 Geffen sales of all time, with GUNS N’ ROSES and WHITESNAKE! With tracks like mega-hit ‘Heat Of The Moment’, Asia helped to create the MTV phenomenon. The band’s work perfected the use of videos that encompassed stories and messages, examples being the work for ‘Wildest Dreams’, ‘Only Time Will Tell’, ‘The Smile Has Left Your Eyes’ and ‘Don’t Cry’. ‘Heat Of The Moment’ is still a radio fixture
and has been in top TV and films including 40 Year Old Virgin, South Park, Cold Case, The Matador and countless others.

In 2006 the original band reunited for a tour of the US, which was followed by four world tours and several continental tours. The reunited band has played over 300 shows and released three new studio albums, three DVDs and a number of live albums. The track ‘An Extraordinary Life’, from 2008’s album Phoenix, was chosen as the theme music for America’s Got Talent. This is a band with plenty more to say.

With a new guitarist in place, Sweden Rock confirmed and more high profile live dates to come, plus a new album slated for release, the Asia trajectory continues: onward and upwards! 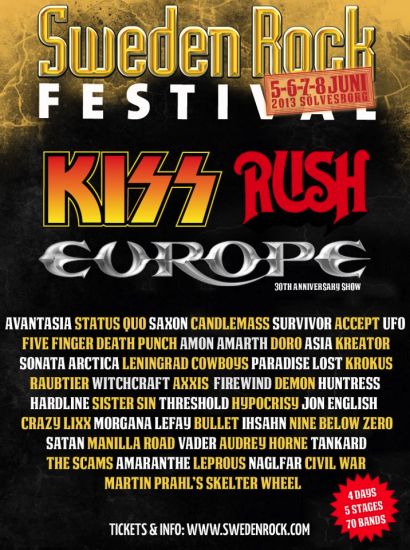 DREAMTIDE has issued the following:

Statement from DEMONICAL – the Masters of Swedish Death Metal Darkness:

“We are proud to announce our confirmation of a headlining tour through Russia this coming October. Our Swedish comrades in Spasmodic will join as support making this “Death Infernal Russia” crusade a lethal death metal firestorm. The tour will include concerts in Velikiye Luki, Izhevsk, Ekaterinburg, Chelyabinsk, Samara, Nizhny Novgorod and various other cities. Exact dates and details to be announced within the nearest days.

We can also reveal that last weekend was spent at the Demonical headquarter rehearsing new material and making preparations for the pre-production phase of the next album. Five tunes were nailed and completed, deadly material that is still good old death metal (which we all worship) but with some new perspectives and varied influences.

The recordings of the next full-length will take place at Necromorbus studios on and off between mid-November and late January with a tentative release date in April/May 2013″.

Posted by Stargazer on September 27, 2011
Posted in: News. Tagged: Dragonland, new album, Under The Grey Banner. Leave a comment

Swedish power metallers DRAGONLAND have set “Under The Grey Banner” as the title of their new album. The third part of the “Dragonland Chronicles” trilogy will be released on November 18 via AFM Records. Musical actor Fred Johanson will play the role of the antagonist, with all three singers from AMARANTHE — Elize Ryd, Jake E and Andy Solveström — also set to make appearances.

The visual artist from million-selling PC game “The Witcher”, Damian Bajowski, will provide artwork for the album; not only will he be responsible for the cover, but will also make illustrations for the various locations in the saga.

Commented guitarist Olof Mörck: “To say I am excited about this album is a grave understatement!

“We were more than thrilled when both Damian Bajwoski and Fred Johanson accepted to contribute to this album. To have the album fully illustrated with majestic scenes and vistas from the story, and to have such a powerful and convincing voice in the role of the antagonist will lend a lot of credibility and depth to the final project! Our singer friends from AMARANTHE also appear in minor roles, further developing the universe the story is set in.

“We really feel that our ambition to give our fantasy story a touch of depth, credibility and maturity paid off well! Lending influences from classical mythology, the best fantasy movies, video games and books, we feel that fans of the style who normally finds fantasy power metal to be too over the top and ridiculous could wholeheartedly enjoy this. We also have some further surprises for you before the actual album release, to keep your eyes open and your senses wary!”

DRAGONLAND‘s fifth album was recorded at several different studios, with Jacob Hansen adding his magic touch to the mix at Hansen studios in Ribe, Denmark. Twelve songs were recorded during the sessions, and the music itself is based on a deep and emotional story, picking up where the band’s second album, “Holy War”, left off nine years ago. The effort also includes a guest appearance by the legendary musical stage actor Fred Johanson.

Songtitles set to appear on the new album include “The Tempest”, “A Stranger I Know”, “The Shadow Of The Mithril Mountains” and “A Thousand Towers White”.

“The Shadow of the Mithril Mountains” full-length demo:

Eight years after the release of “Blot”, legendary Viking metal act EINHERJER will issue its comeback album, “Nørrøn”, on September 9 via Indie Recordings. The CD was recorded at Studio Borealis and was produced by EINHERJER‘s Frode Glesnes. Matt Hyde (SLAYER, MONSTER MAGNET) mixed the effort. The cover artwork was painted by Renathe H. Bryn.

According to a press release, “Nørrøn” “has the quality to send you on a musical journey where your present dies and all your senses starts to relive the music. Where you are plunged into a life of forgotten wisdom, beliefs and forces. Where all that was lost and taken has been resurrected. Where you stand steadfast on Norse ground, calling for revenge from your heathen heart.”

EINHERJER was one of the very first bands to use the Viking thematic and the Norse mythology in metal, and are one of the founders of this now widely acclaimed metal sub-genre. Their name also has its roots in the Norse mythology as EINHERJER is a Viking’s life after death. When a Viking was slain in battle, he was brought up to Valhalla by the Valkyries to join the army of Einherjers and help the Gods in their clash against the Giants in the age of Ragnarok.

EINHERJER disbanded in 2004 after the release of its album “Blot” through Tabu Recordings. EINHERJER reformed in 2008 and a year later played the Wacken Open Air, Ragnarock and Kaltenbach festivals, along with other select dates on the Paganfest 2009 tour.  Source: Blabbermouth.net

CORRODED: ‘Exit To Transfer’ To Receive U.S. Release In September

“Exit To Transfer”, the new full-length album from Swedish rockers CORRODED, will be released in North America on September 27 via Ninetone Records. The CD, which landed on the official Swedish chart at position No. 6, draws influence from the heavy rock acts of the 1970s with additional layers of a more modern sound shining through.

CORRODED recently teamed up with Electronic Arts (EA Games) to produce the main soundtrack, “Age Of Rage”, for the upcoming free-to-play First Person Shooter game Battlefield Play4Free. The song, produced by Patrik Frisk, will be included on the international release of “Exit to Transfer”.

According to the band, “Maledictus Eris” “recounts the tale of the Black Death’s incursion into Danish history from 1349 to 1350. The album begins the tale from just prior to the plague’s arrival through to when the first bout relinquished its grasp, and focuses on the way the epidemic affected the population — from victim to survivor.”

The group adds, “We have taken more inspiration from medieval music than on previous albums, and the feel of the album in general has taken a darker and more emotive turn on this recording.”

“We are extremely satisfied with the way this album has turned out and hope that the fans — both old and new — will take kindly to it. But at the same time, we should also make clear that this album is somewhat different to its predecessors, and not for the worse as far as we’re concerned.

“We have a series of live dates in Denmark lined up for after the release, and hope to be able to add more European dates to the list soon. News on dates and leading up to the release will be posted as soon as we have it.”