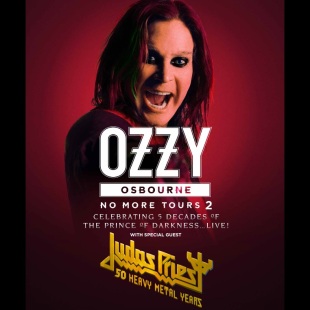 JUDAS PRIEST have issued, via their Official Facebook Page, the following announcement

Rock and Roll Hall of Fame inductee and Grammy®-winning singer and songwriter OZZY OSBOURNE has just announced rescheduled shows in the UK and Europe on his “NO MORE TOURS 2” tour.

The six-week trek kicks originally scheduled for January now kicks off in OZZY’s native UK on October 23 before wrapping December 7 in Helsinki, Finland. The tour includes stops throughout the UK and sees the “Prince of Darkness” return to Birmingham for a hometown Halloween show. European dates include stops in Germany, Austria, Italy, Spain, Switzerland, Sweden and Finland.

Says OZZY: “I can’t wait to get off my ass and get going again, but you’re just going to have to be a bit more patient. I want to be 100% ready to come out and knock your fucking socks off. I’m not retiring, I’ve still got gigs to do and also there’s a new album on the way. To the fans, I sincerely thank you for your patience, your loyalty, I love you.”

Judas Priest remain as special guests across all dates completing the heavyweight metal line up. Says Rob Halford “We are very grateful for the rock solid support from our wonderful UK & European fans as Ozzy gets well and strong. The UK/European tour will showcase the very best British Metal from the ones that started it all and we proudly look forward to celebrating our 50 Heavy Metal Years together with you!”

OZZY’s rescheduled 2020 European dates are below:

Tickets remain valid for all rescheduled tour dates. Refunds can be sought at point of purchase.

Just two days ahead of OZZY OSBOURNE‘s ‘No More Tours 2’ which was due to start in the UK and Ireland, it has been announced via the official JUDAS PRIEST Facebook page that the first four shows have been postponed due to illness. The statement reads as follows:

“It is with great regret we have to announce that the first four UK shows on the Ozzy Osbourne/Judas Priest tour have been postponed due to Ozzy having a very bad case of flu – therefore Dublin, Nottingham, Manchester and Newcastle will be rescheduled at a later date – details to follow once finalised – we are very sorry that this has happened and to disappoint so many fans – we wish Ozzy well and look forward to the Glasgow, Birmingham and London shows together – and to the rescheduled ones in the future.

The tour, which should have been starting in Dublin on 30th January, will then move onto Europe with special guests JUDAS PRIEST, before moving onto Australia and New Zealand in March.