Nuclear Blast is pleased to announce the worldwide signing of Greek symphonic death metal outfit, SEPTICFLESH! The group’s unique blend of symphonic arrangements, avant garde elements, atmosphere and eviscerating extreme metal has been converting legions into fans since the 90s. Now, with a streak of modern classic albums under their belt such as »Sumerian Daemons« (2002), »Communion« (2008), »The Great Mass« (2011), »Titan« (2014), and now »Codex Omega« (2017) there seems to be no stopping this creative juggernaut.

“We are honored to have signed with one of the world’s leading record labels, Nuclear Blast records,” commented the band. “SEPTICFLESH has always been a hard working band looking to the future while keeping traditional elements and utilizing a modern and dark feel to our music. We needed someone who would understand this and we are happy to have found our new home with Nuclear Blast. In the meantime, our latest album »Codex Omega« continues to gain ground worldwide. We will keep touring in support of it and prepare for the conquests set before us!”

Nuclear Blast comments:
“We at Nuclear Blast are fans huge fans of SEPTICFLESH, and we’re extremely excited to be working with one of the most revolutionary and forward thinking extreme metal bands around. We very much look forward working with the band on their upcoming pieces of sonic art!”

SEPTICFLESH plan on releasing their Nuclear Blast debut in 2019. More information to be announced in the near future, so stay tuned.

SEPTICFLESH‘s latest album “Codex Omega” is the first to feature former DECAPITATEDdrummer Kerim “Krimh” Lechner. Months of hard work and experimentation crafted the album, and resulted in 10 compositions of dark sonic bliss. Lyrically and musically, “Codex Omega” is by far the most infernal release of SEPTICFLESH to date. The album was produced by highly acclaimed metal producer, Jens Bogren (OPETH, AMON AMARTH, KREATOR). Besides the orchestral side represented once again by the Filmharmonic Orchestra of Prague, the band utilized traditional instruments such as Oud and Duduk and also a 12 string electro-acoustic guitar, enhancing the mystical atmosphere of the compositions. Of course as always, “Codex Omega”is dominated by the relentless death guitar riffing and the pale melodies that are the trademark of SEPTICFLESH. 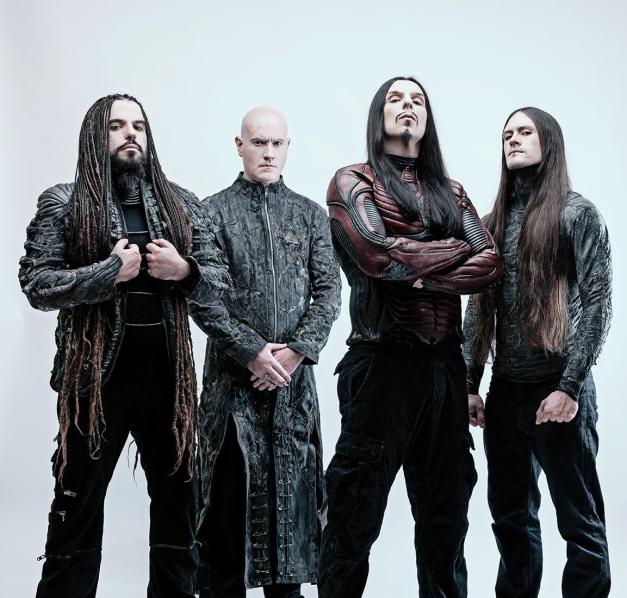 LAMB OF GOD: “The Duke” EP Out Now

Internationally-renowned heavy rock band LAMB OF GOD release their brand new EP, entitled “The Duke”, today via Nuclear Blast Records. “The Duke” EP is titled after the new track ‘The Duke’, written in honor of the band’s late friend and fan, Wayne Ford, who was named after “The Duke” John Wayne.

Get the digital version here.

You can listen to the track ‘The Duke’ here:

**Contributors who give $5 or more will automatically be entered to win Randy Blythe‘s Ashes of the Wake gold record plaque.

At www.propeller.la/lambofgod, you can also contribute to the Leukemia & Lymphoma Society without receiving a reward. 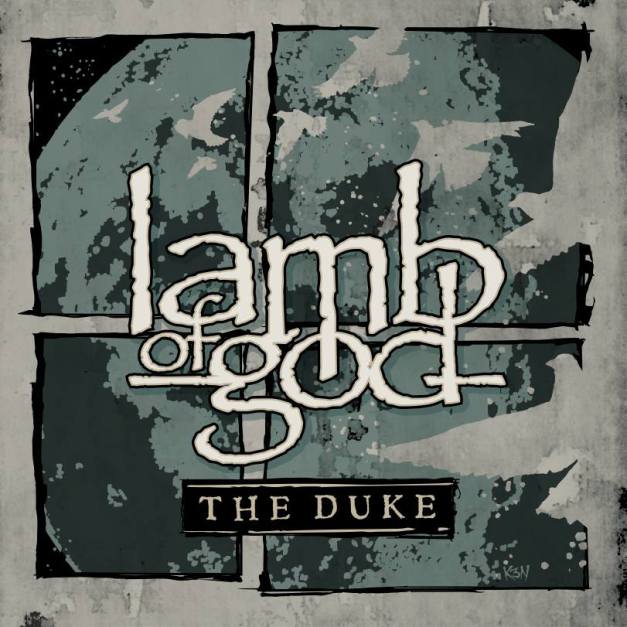 EL HIJO DEL SANTO and SANTO JR will be in attendance for a signing session on Saturday, June 23rd at 1pm at the Nuclear Blast Records booth. 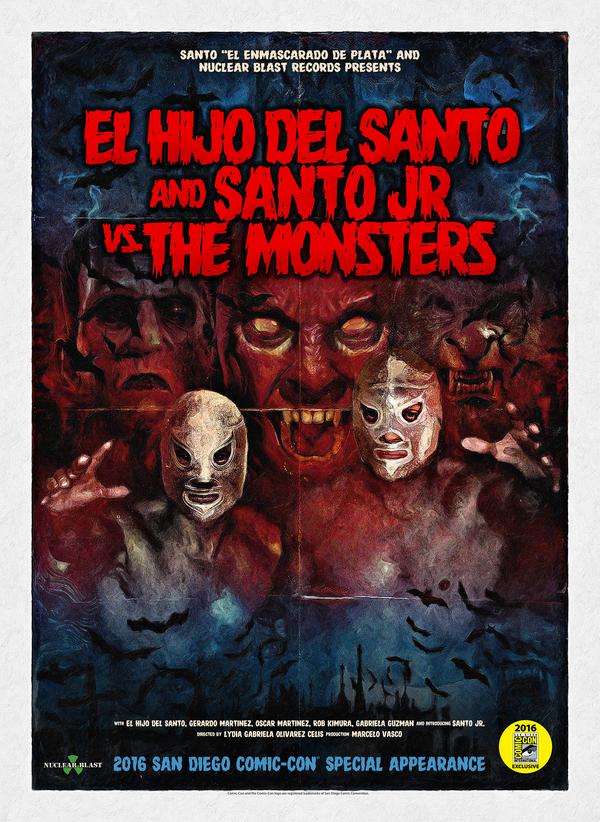 EL HIJO DEL SANTO comments:
“Hello to all my friends reading, I want to express how proud and honored I feel about assisting such an event as the upcoming San Diego Comic-Con 2016. I’m very grateful to my friends Oscar and Gerardo Martinez, whom along with the Nuclear Blast team made my participation on this amazing event possible. I hope you enjoy Comic-Con as much as I know I will and I hope that you come around the booth where I’ll be signing autographs and taking pictures. I’m really looking forward to my arrival at San Diego and share with all of you the surprises and everything that will be going on in SDCC16. I’ll see you all there! Long Live San Diego Comic-Con!”

Santo Jr adds:
“I’m finally assisting Comic-Con! It’s always been a dream of mine attend SDCC16 and I’m really excited about sharing this with EL HIJO DEL SANTO! We have some great news about EL SANTO and you just HAVE to be there. We’ll be doing some CC exclusive t-shirts with JSR Merchandising that you can’t miss. I just can’t wait to get there, I’m truly looking forward to having a great time in SDCC16 with my friends and I hope to see you all there. It will be just like X-Mass in July!”

ABOUT EL SANTO:
Without a doubt EL SANTO is the biggest name in all of Lucha Libre (Mexican Wrestling). Debuting in 1934, EL SANTO became the biggest name in the sport of Lucha Libre. Expanding his greatness not only on the wrestling ring but on the silver screen, he starred in nearly 100 films that dealt with vampire women, werewolves, criminals and many more. His popularity and charisma with people was so massive that his movies became instant hits with the people and not to mention regarded as the #1 most iconic Mexican wrestler of all time. EL SANTO passed away in 1984 but not before passing the torch his son and heir to the throne; EL HIJO DEL SANTO. Debuting in 1982 EL HIJO DEL SANTO had a huge responsibility to carry with the legendary Silver mask and the name that people grew up with, but like a true real life hero he took the challenge head on and has been able to forge an illustrious career on and off the wrestling ring. EL HIJO DEL SANTO has been able to take Lucha Libre to a whole new level. He has taken the sport to different countries on numerous occasions and most notable for the first time ever in history had a wrestling event at the world known Louvre Museum in Paris France, where he was one of the contenders. Regarded as one of the best ever in the sport and respected by his peers, EL HIJO DEL SANTO has been able to decorate his career with many records, championships and achievements. As EL HIJO DEL SANTO’s wrestling career is coming to an end his son SANTO JR is taking on the challenge his father once had and continuing the legacy of the Silver Masked Man and promising to take the third generation of this character and tradition to new levels.

ABOUT NUCLEAR BLAST RECORDS
Independently owned for 29 years and counting, Nuclear Blast Records is synonymous with the worldwide advancement of heavy metal, extreme music, and hard rock. Founded in Donzdorf, Germany in 1987 by Markus Staiger, and headed in the US at the Los Angeles office for over a dozen years by Gerardo Martinez. Nuclear Blast boasts a roster of over 100 bands representing eighteen countries. Their satellite office in Los Angeles has helped build the label’s trusted global reputation with numerous Billboard album chart entries, high-profile tours, and continual signings of new & heritage acts.

The band commented:
“We wish to inform you that DIMMU BORGIR and Nuclear Blast once again put pen to paper, acknowledging the past, present and future by opening another chapter in the history of extreme music! Stay tuned and watch this space for more updates on the new album and the “Forces of The Northern Night” live DVD/Blu-ray release as it becomes available!”

Nuclear Blast owner Markus Staiger adds:
“We at Nuclear Blast are super happy to extend the cooperation with our good friends in DIMMU BORGIR! The future holds amazing opportunities and projects to be worked on together, the first being the eventual release of the long awaited »Forces Of The Northern Night« live DVD! Keep your eyes peeled – darkness is upon us!” 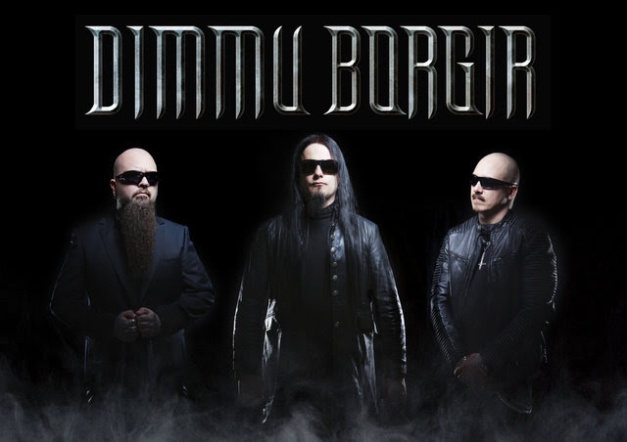 Nuclear Blast Records, one of the world’s largest heavy metal record labels has agreed to terms with Slaton Racing for the 2016 Monster Energy Supercross Series. The most popular motorcycle racing event series in the world.

“I couldn’t be more amped to see Nuclear Blast Records back at Supercross. With the tremendous growth of both Nuclear Blast Records and the sport of Supercross in recent years, it only solidifies the connection that we as fans feel toward the music we listen to and lifestyles we lead. We plan to turn it up to 11 this year and hold it wide open!” – Ryan Clark, YP.com/Nuclear Blast/KTM Slaton Racing

Make sure you stop by the Slaton Racing pits to meet both of their riders, Zac Commans (Instagram/Twitter: @zaccommans), and Cole Thompson (Instagram/Twitter: colethompson16), and rest of the YP.com Nuclear Blast KTM team when the 2016 Monster Energy Supercross season kicks off on January 9, 2016 in Anaheim, California.

Posted by aliblackdiamond on September 18, 2015
Posted in: News. Tagged: 'I Hurt', children of bodom, I worship chaos, Nuclear Blast Records. Leave a comment

Finnish metal superstars CHILDREN OF BODOM have released a brand new single ‘I Hurt’. The single is taken from the band’s ninth studio album “I Worship Chaos” out on October 2nd via Nuclear Blast Records. Check out the lyric video below: 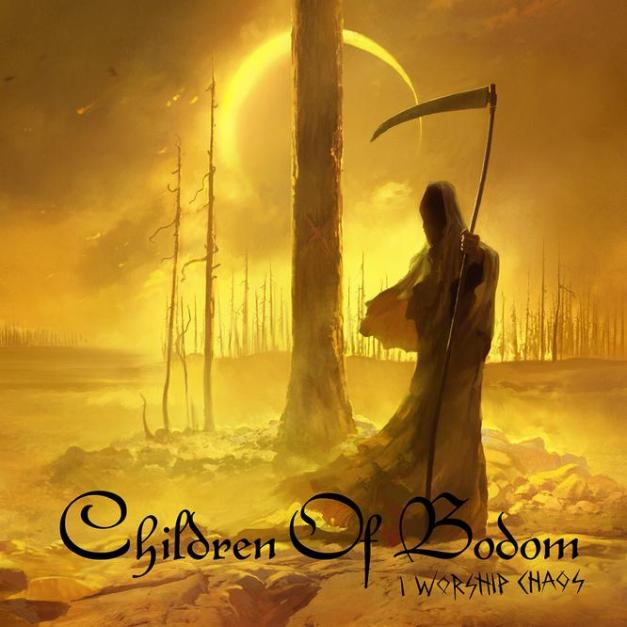 The band will be part of a small UK and Ireland tour with MEGADETH, LAMB OF GOD and SYLOSIS in November: