Legendary U.S. heavy/doom metal band PENTAGRAM recently reunited with Peaceville Records for its new studio album, Curious Volume, due out August 28. “Walk Alone” is the latest track to be unveiled from the record. Described by frontman Bobby Libeling as “a song of devastation conquered by optimism and realization of self-worth. There is a light if you force yourself to look for it.” Listen to “Walk Alone” on Soundcloud, below:

“Walk Alone” is the 2nd track from the album to appear online and follows the recent, “Misunderstood,” streaming here:

To support the new album, the band has tours planned in North America and Europe throughout 2015/2016.

Formed in the early 1970s with a debut album Relentless releasing in 1985, Pentagram has survived through more than four decades filled with adversity and triumph to become the legendary international act it is today, firmly stamping its name into the heavy metal history books. Although once viewed as a cult act but with a strong and dedicated global fan base, Pentagram has enjoyed a recent surge in popularity due in part to the 2011 documentary, Last Days Here, which follows the trials and tribulations of a troubled rock star, Pentagram’s lead singer Bobby Liebling. With a DVD release set for this fall on Peaceville’s label, the documentary has garnered international recognition on the film festival circuit and has won several awards, including “Best Music Documentary” at the International Documentary Film Festival in Amsterdam.

The band recently released its double DVD collection, All Your Sins, featuring over 7 hours of live footage spanning a period of three decades.

Stay tuned for more information on Pentagram and Curious Volume, out this August on Peaceville.

PENTAGRAM Re-Signs With Peaceville, To Release New Album This Summer

Peaceville Records have announced the re-signing of U.S. metal legend, PENTAGRAM, for its forthcoming studio album, set to be released summer 2015. The highly influential American heavy metal/doom act, fronted by the mysterious Bobby Liebling, formed in the early 1970s, though its debut album – now known as Relentless – didn’t see a release until 1985. Through four decades of adversity and triumph, Pentagram has become a legendary international act and has firmly stamped its name in the heavy metal history books. 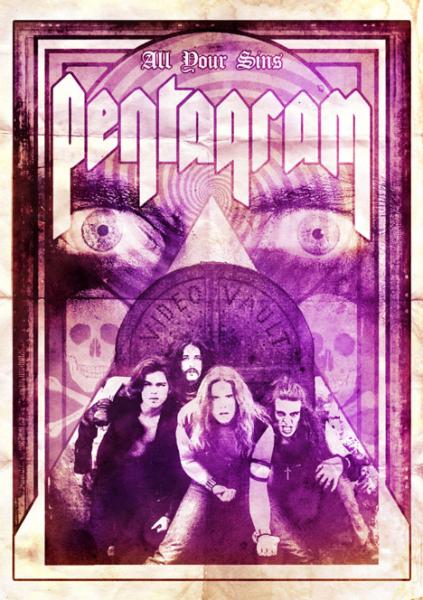 The band comments on the signing:

“Pentagram is happy to return to the label that helped relaunch interest in our debut album and introduce us to a new metal audience in the 1990s. Peaceville Records has been an ally to us throughout the past 20 years. We are happy to have them by our side once again as we record our fourth album under their banner. Never properly recorded songs written by Bobby in the 70s will be heard on the album as fresh as they were when they were written over 40 years ago. Brand new numbers by the core of Griffin, Turley and Liebling that were written this fall will appear along the old songs, and will produce an album that encompasses the true spirit of Pentagram. Doom is often mistaken as exclusively slow music. If you listen to our classic ‘doom’ album ‘Relentless,’ many of those doomed classics are quite fast. One of the magics of doom metal is to have a faster song seem much slower because of the sheer heaviness of the number. That’s what we are going for. The band will sound like they are as much from the street as they are from the Sabbath, because, well, we are.”

It has also been announced that Sean Saley has decided to step down from the drum throne. “Minnesota” Pete Campbell will step in to complete recording and touring duties throughout 2015. Campbell is best known for his drumming with Victor Griffin’s In-Graved, Place of Skulls and stoners Sixty Watt Shaman.

Preceding the still-to-be-titled opus is an extensive DVD release, All Your Sins, due out March 31 in North America. This first-ever official Pentagram video collection recovers, repairs and resurrects the earliest known footage of this doomed metal pioneer and more. Featuring two DVDs packed with priceless archive footage, as well as recent shows, All Your Sins – Video Vault unearths the rumored lost visual evidence pent up in the Ram Family vault for decades. This definitive collection contains over seven hours of footage from nine venues and numerous historical shows, including a charged performance at the legendary CBGB’s club in 1985 – a mass of classic renditions from the band’s catalogue finally gathered together for a live journey spanning over 30 years.

Although always a cult act with a strong and dedicated worldwide fan base, Pentagram has enjoyed a recent surge in interest due in part to the fly-on-the-wall 2011 documentary, Last Days Here, following the life, trials and tribulations of Bobby Liebling. The film gained international recognition, travelling the worldwide film festival circuit where it won several awards including “Best Music Documentary” at the International Documentary Film Festival in Amsterdam.

PENTAGRAM: To Release ‘All Your Sins’ Double-Disc DVD In February 2015

Posted by tarjavirmakari on November 7, 2014
Posted in: Int. News. Tagged: ‘All Your Sins’, Peaceville Records, PENTAGRAM. Leave a comment

US metal legends PENTAGRAM are set to release their extensive double-disc DVD collection, titled ‘All Your Sins’, on Peaceville Records. Featuring over 6 hours of numerous electrifying concerts spanning three decades – all straight from the band’s collection – ‘All Your Sins’ is due for release in February 2015.

Pentagram, the highly influential American heavy metal/doom act fronted by mastermind Bobby Liebling, formed in the early 1970s, though their debut album – now known as ‘Relentless’ – didn’t see a release until 1985. Through 4 decades of adversity and triumph, Pentagram has become a legendary international act and have firmly stamped their name in the heavy metal history books.

This first-ever official video collection recovers, repairs and resurrects the earliest known footage of these doomed metal pioneers and more. Featuring 2 DVDs packed with priceless archive footage, as well as recent shows, ‘All Your Sins – Video Vault’ unearths the rumoured lost visual evidence pent up in the Ram Family vault for decades.
This definitive collection contains numerous historical shows, including a charged performance at the legendary CBGB’s club in 1985, with a mass of classic renditions from the band’s catalogue finally gathered together for a live journey spanning over 30 years.

Although always a cult act with a strong and dedicated worldwide fanbase, Pentagram has enjoyed a recent surge in interest due in part to the fly-on-the-wall 2011 documentary, ‘Last Days Here’ following the life, trials & tribulations of Bobby Liebling. The film gained international recognition; travelling the worldwide film festival circuit where it won several awards including “Best Music Documentary” at the International Documentary Film Festival in Amsterdam.

Peaceville Records announce the signing of Norway’s exponents of groove-laden black metal, KHOLD to its roster.

After a period of 6 years in the wilderness, KHOLD are back with a new album, ‘Til Endes‘ set for release on 29th September (30th September US) on Peaceville Records.

‘Til Endes‘, undoubtedly the band’s strongest work to date explores the dark foreboding corners of the metal spectrum with eerie riffs, grim vocals courtesy of mysterious frontman Gard, and catchy hooks which are so often ignored in the genre.

Expanding upon Khold’s staple sound of mid-tempo primitive & heavy black metal, the band’s sixth studio release adds an additional aggressive edge to the tracks overall, whilst retaining their use of solely Norwegian lyrics. The album also notably includes a cover of the Sepultura classic, ‘Troops of Doom’, given the full Khold treatment, and titled ‘Dommens Arme’.

‘Til Endes’ was recorded at Studio Fredman (Amon Amarth, At the Gates, Opeth) in Sweden in June 2014, with the line-up of Gard (vocals/guitar), Sarke (drums), Rinn on guitar & Crowbel on bass.

Khold will be making a special performance at the Brutal Assault festival in August & a new promo video will also soon be revealed.

Khold formed in Oslo in the year 2000, by Gard & Sarke (currently seen in his own, self-named act, alongside Darkthrone’s Nocturno Culto), as Khold emerged out of the ashes of the cult band Tulus. They have recorded 5 albums to date since their debut ‘Masterpiss of Pain’ was released on Moonfog Productions, & have successfully toured with bands such as Satyricon & Behemoth in the past.

Peaceville Records has announced the signing of WHITE EMPRESS featuring ex-Cradle of Filth guitarist, Paul Allender. The band’s debut album, Rise of the Empress, will release this fall on Peaceville in conjunction with PledgeMusic.com. The album can be pre-ordered now through PledgeMusic, HERE, along with plenty of White Empress goodies from signed artwork, signed guitars, to the opportunity to record in Paul Allender’s studio and more. Pledgers will also be able to download a track from Rise of the Empress.

Formed by guitarist Paul Allender – previously of U.K. titan Cradle of Filth – and with a full band line-up, this new venture into the metal landscape under the moniker of White Empress exudes the depth and ferocity of his prior work whilst pushing new boundaries. Allender’s signature razor-sharp riffing and epic, melodic twists and turns compliment the sumptuously alluring and often demonic voice of Mary Zimmer (Luna Mortis) to create a master class in savage, yet uplifting metallic darkness.

The album was recorded in White Empress’ studio and has been mixed and mastered by veteran producer, Kit Woolven (Thin Lizzy, Cradle of Filth).

“White Empress is the link the music scene has been so desperately missing,” said Allender. “The band started writing together two years ago, and have slowly crafted the sound that is White Empress. White Empress has all the best parts of the metal scene rolled up into one band. The music is hard, but emotive. White Empress’ unique style and sound is bringing fresh life to the music scene that it’s been crying out for.”

In between working with Cradle of Filth, Allender relocated to the U.S. in 2012 and decided to start work on another project with local musicians in his newly adopted home of Minneapolis, Minn. along with his friend, Martin Skaroupka from Cradle of Filth. This soon became White Empress. Having also recently released the acclaimed EP, ‘White Empress,’ the stage was set for a full-on assault.

Stay tuned for more information on White Empress and Rise of the Empress.