STATUS QUO have announced via their official Facebook page that guitarist Rick Parfitt has passed away. The statement from The Parfitt Family & Status Quo Manager, Simon Porter can be read below:

“We are truly devastated to have to announce that Status Quo guitarist Rick Parfitt has passed away at lunchtime today.

He died in hospital in Marbella, Spain as a result of a severe infection, having been admitted to hospital on Thursday evening following complications to a shoulder injury incurred by a previous fall.

This tragic news comes at a time when Rick was hugely looking forward to launching a solo career with an album and autobiography planned for 2017 following his departure from Status Quo’s touring activities on medical advice.

He will be sorely missed by his family, friends, fellow band members, management, crew and his dedicated legion of fans from throughout the world, gained through 50 years of monumental success with Status Quo.

Rick is survived by his wife Lyndsay, their twins Tommy and Lily and Rick’s adult children Rick Jnr and Harry.

No further comment will be made at this time and Rick’s family, and the band, ask for their privacy to be respected at this difficult time.” 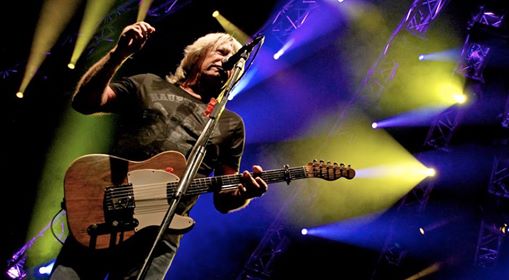 STATUS QUO have announced via their official Facebook page that guitarist Rick Parfitt has been ordered to rest for the remainder of the year at the very least following on from his heart attack and associated complications following a Quo show in Turkey on June 14th.

This means, of course, that he will be unable to take part in the forthcoming ‘Last Night Of The Electrics’ European and UK tour which commences in Vienna, Austria on October 12th.

Simon Porter, the band’s manager comments, “Although Rick is recovering well and is now able to lead a relatively normal day to day life, he is far from being fit enough to undertake the rigours of Quo’s touring schedule. Perhaps now is the time to reveal that Rick actually ‘died’ for several minutes directly following his heart attack which resulted in mild cognitive impairments for which he continues to receive neuropsychological support.
His medical team continue to be confident of a full recovery, but Rick’s absolute priorities for the foreseeable future are for his health and wellbeing and to be able to see his eight year old twin children Tommy and Lily grow up.

To this end, Rick may well have performed his last show with Quo, but no final decision will be made until next year. Regardless, it is his wish that the band continue to tour as planned and he will always be a part of Quo’s numerous other off stage activities”.

Rick has given his full blessing for the band to continue to honour their touring schedule in order to not let down the fans. Until the end of 2016, Status Quo will continue to utilise guest musicians. Irish guitarist Richie Malone, who is currently playing with the band, will continue in this role at least until the end of Quo’s European schedule which concludes in Paris on December 4th. Freddie Edwards, son of Quo bass player John ‘Rhino’ Edwards also stepped in for Rick during some of the Summer shows.

Rick will also use his convalescence period to compose songs for a long overdue solo album which he plans to record early next year. In the meantime, both Rick and the band would like to thank the fans for their continued understanding and support.

In the early hours of Wednesday 15th June 2016 following the STATUS QUO gig at Expo 2016 in Antalya, Turkey, Rick Parfitt suffered a suspected heart attack, the band stated via their official Facebook page.

Rick is being treated in a hospital in Turkey and whilst his condition is serious, he has already demanded his customary cup of tea with two sugars and a sweetener.

The band had already agreed to perform at the Rock On Windermere charity show on Saturday 18th June to raise funds for the Cumbria Flood Appeal. Rick and the band did not want to cancel this important show, and so it will go ahead with Freddie Edwards, the son of Quo bassist John ‘Rhino’ Edwards, stepping in for Rick. It is likely that Freddie will stay with the band to allow them to honour their commitments and not let down the fans up to and including the show on Sunday 3 July at Gröna Lund Tivoli, in Stockholm, Sweden.

Simon Porter, the band’s manager said, “No further comment will be made at this stage until the completion of the next round of tests and assessments to be made over the next few days. We would ask you to respect the family’s privacy at this difficult time.”

As previously reported, STATUS QUO had to cancel six shows due to guitarist Rick Parfitt‘s health problems. The band have updated fans on Rick‘s progress via their official Facebook page:
“In case you missed the news…
Rick Parfitt was flown home to Britain early this week by air ambulance from Croatia where he had been taken ill, leading to the cancellation of planned European shows up to and including 10th August. An angiogram undertaken as part of various tests done at the Royal Brompton Hospital in London has revealed that one of the grafts inserted during his original 1997 quadruple heart bypass had become furred, leading to this current problem.

The situation has been remedied by the insertion of a stent and Rick is now recuperating.

The band’s management have confirmed that shows at Clumber Park NT in Worksop, Notts, and Holkham Hall in Norfolk (on 15th and 23rd August respectively) will go ahead as planned.

Manager Simon Porter added, “We are all obviously delighted that Rick has made such rapid progress, especially as the band is shortly to unveil another exciting and innovative new project, details of which will be announced in the next couple of weeks.” ”

STATUS QUO have been forced to shelve several concerts after guitarist Rick Parfitt fell ill, according to the independent.co.uk. The 65-year-old star was taken ill on Friday (1 August) and rushed to hospital, where he was kept overnight.

Status Quo are currently on their European tour and were due to perform in Pula, Croatia yesterday but the gig was abandoned, along with five other shows that were going to take place in Monte Carlo, Switzerland and Germany.
According to Status Quo’s official site, the next performance will take place on the 15 August in Nottingham.

In a post on the group’s Facebook page, Status Quo‘s manager Simon Porter said, “The band do not cancel shows lightly, as any of our fans will tell you, but in this instance we have no option but to follow medical advice.”
The musician has previously suffered from ill health, he had a quadruple heart bypass in 1997, after doctors warned him about his dangerous rock and roll lifestyle. Then in 2005, he had to cancel a tour to undergo tests for suspected throat cancer.

Parfitt’s son, also called Rick, posted on Twitter yesterday, “Hi all,…just to say that Dad is ok, but he has to stop thinking he is invincible that is all I can say right now. #WorriedandUpset”.

The cause of Parfitt‘s condition has not been revealed but more information will be released next week. 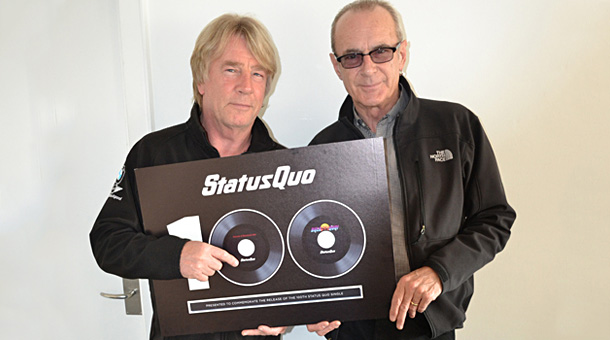