Metal Blade Records has partnered up with Norway’s Indie Recordings to release new albums from the label’s ever expanding roster. Indie Recordings has become one of the leading independent record labels in Scandinavia, releasing gold-record status albums from bands including Kvelertak and Satyricon. Indie Recordings have mainly focused on developing Norwegian acts such as: 1349, Kvelertak, Satyricon, Enslaved, God Seed, Keep Of Kalessin, and more. For more information, visit indierecordings.no. 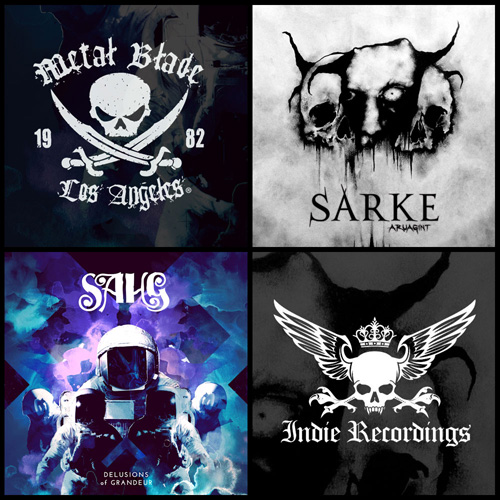 To begin the new partnership, Metal Blade Records is proud to officially release Sahg’s “Delusions of Grandeur” and Sarke’s“Aruagint” throughout North America. Both albums will be released in stores and on-line on February 18th, 2014.

Sahg’s “Delusions of Grandeur” was released in Europe on October 28th of 2013. The album received high praise from press, with Metal Hammer UK declaring that it’s “their strongest record yet”, and metal.de simply calling “Delusions of Grandeur” “Challenging and beautiful.” Fans of recent releases from Opeth, Uncle Acid & the deadbeats, and Mastodon would do well to listen to Sahg! Watch the video for “Slip Off the Edge of the Universe” and pre-order at metalblade.com/sahg.

“Delusions Of Grandeur is a concept record about a person, whose delusions of grandeur escalate to the level where they consume him completely,” explains SAHG’s Olav Iversen (vocals, guitar). “From becoming increasingly psychopathic and dominant, he loses touch with everyone around him and isolates into his own imaginary, psychotic world, where he becomes the almighty ruler of the universe. As he stands on the highest peak of his domain and beholds all that he has conquered, he suddenly slips off the edge and floats away, weightless. Helpless and stripped of all power, he drifts further into the open space, until he disappears into the darkness. It’s an album about how desire for power and property can distort and destroy who we are.”

“Our music is inspired by the great 70′s rock bands, 80′s speed metal bands and 90′s black metal bands. Put this together with the creative mind of the band and you get pure dark rock music sounding clear, raw and honest.” – Sarke

With a deep and rich tradition of metal, both as host of the infamous Hole In The Sky festival and the great newcomer Beyond The Gates Festival, it is also the hometown of many great and famous bands from the dearly beloved dark side of metal. The festival will be held in the darkest time of the year. Cold winds and snow will lay the perfect scene for the atmosphere we want to create. 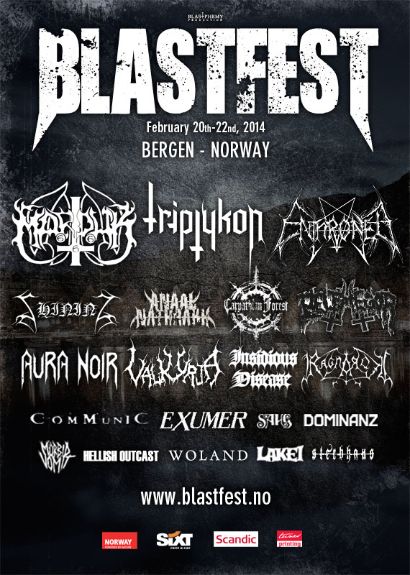 Surrounded by the seven famous mountains, the main venue, USF Verftet, is based right at the dock by the city fjord, and second venue, Garage, is in the heart of town. Bergen is the second biggest city in Norway and counts 250,000 habitants. With a rich cultural tradition alongside the beautiful nature, Blastfest will also have a focus towards the town of Bergen and its history. The promoters want you to see what the town really is. In cooperation with the Viking community and cultural institutions of Bergen they want to bring you a unique experience combining your passion for metal music with nature, history and of course, the Vikings. This may be an indoor festival, but that does not mean they cannot use the whole city as our festival ground.

For ticket and other additional information visit Blastfest.no.

The first in a series of video clips featuring behind-the-scenes footage from the studio can be seen below.

Posted by tarjavirmakari on December 6, 2011
Posted in: News. Tagged: Sahg. Leave a comment

GetYourRockOut conducted an interview with SAHG — the Norwegian heavy rockers who feature in their ranks current/former members of GORGOROTH, MANNGARD and AUDREY HORNE — at U.K.’s Hard Rock Hell V festival, which took place December 1-4, 2011 at Pontins in Prestatyn, North Wales. You can now watch the chat below.  “Mortify”, the new video from SAHG can be viewed below. The clip was directed by Tommy Naess. Source: Blabbermouth.net

Posted by tarjavirmakari on November 3, 2011
Posted in: News. Tagged: Sahg. Leave a comment

“Mortify”, the new video from SAHG — the Norwegian heavy rockers who feature in their ranks current/former members of GORGOROTH, MANNGARD and AUDREY HORNE — can be viewed below. The clip was directed by Tommy Naess. “Mortify” comes off SAHG‘s third album, “Sahg III”, which was released on August 30, 2010 through Indie Recordings. An e-card for “Sahg III” is available at this location. Source: Blabbermouth.net

Behind the scenes of “Mortify” video shoot: