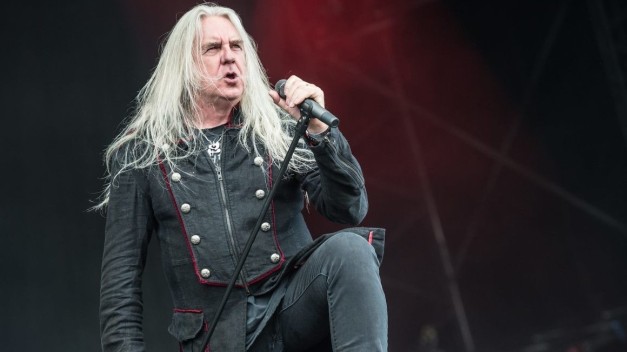 Jimmy Kay from Canada’s The Metal Voice recently spoke to Saxon‘s front man Biff Byford about his new solo album School of Hard Knocks, Saxon‘s upcoming new album that is in the works and dealing with Covid19.

When asked the difference between doing a solo album vs doing a Saxon Album
“On this solo album I sing about myself, I don’t sing too much about myself on Saxon albums. A lot of the songs on the solo album are specific to me like the School of Hard Knocks, Black and White and Me and You. It’s like a musical story of what influences me, the album sums up the sort of music I like.”

When asked if he were to do another solo album would he cover more genres of music
“I don’t think so, I cover a wide spectrum on this album from folk music, to Prog Rock, to Metal, to Rock and Roll ,to Ballads. The music ranges from heavy to mainstream. I think I will stay within that wide range.”

When asked how serious he is taking the Coronavirus
“It’s very serious, I live in the country side, people tend to come here on the weekend, it was packed last weekend, which is stupid.  There are people out biking and walking in twos, you can’t go out in a group unless it’s your family. The police have gotten new powers as of today so they can stop people put them in isolation or give them a fine. ”

When asked about the musical direction on the new Up and Coming Saxon album that is being worked on
“The album is heavy, it’s the same as Thunderbolt, Battering Ram and Sacrifice. It’s Heavy and it’s quite British, we like to retain that. Me and Nibbs Carter wrote most of the songs again. Now we are on hold and I am still open to write more songs. The boys are working on songs, if they come up with anything strong than we might re-record some of the stuff and put newer stuff back in. There are a few songs that we put together that are pretty cool. It’s heavy and there is some great guitar playing on it from the boys. Nigel’s drumming is up there with much younger drummers if you know what I mean, pushing himself. Andy Sneep is producing it.  No songs are completed, the lyrics are 50% done. We wanted the album to come out early 2021 but I don’t know now, we might have to re-think.”

When asked about his Heart Attack
“It all started with my heart biking, that’s when I got the twinge. it wasn’t like a Hollywood heart attack, it was more like indigestion and they found a wacky rhythm in my heart and they sent me in. I lived with it for maybe 3 weeks before I decided something was wrong. It was a triple bypass.”

When asked about what he will be doing in his down time
“We are thinking of shooting a music video for Pit and the Pendulum off my solo album but obviously we have to shoot it remotely but it can be done.” 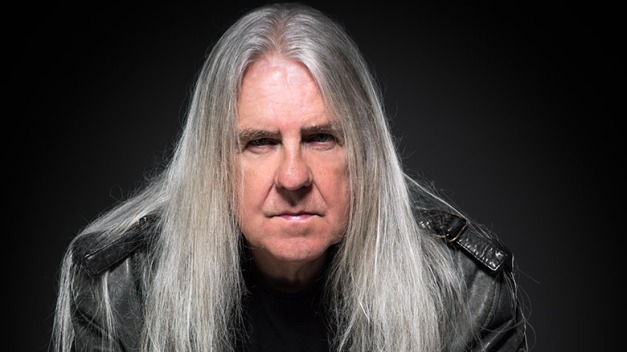 School of Hard Knocks, the first full-length offering by legendary frontman BIFF BYFORD is out now via Silver Lining Music. To celebrate its release, Byford unveils the new video of his take on the classic song, ‘Scarborough Fair’.

“The new single Scarborough Fair is a Yorkshire Folk song about the town on the east coast of England. Apart from the song, Scarborough is also famous for its medieval market and takes its name from a Viking chief called Scar, I believe. We shot the video on a freezing early morning… Enjoy!”

Watch the previously released videos for ‘Welcome to the Show’, ‘School of Hard Knocks’ and “Me and You” HERE. 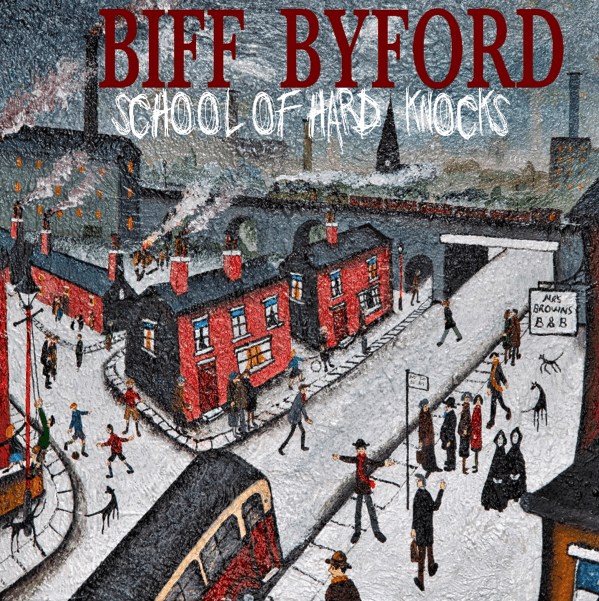 BIFF BYFORD Releases Video For New Single “Me And You”

“Happy Valentine’s Day! I wrote this song for my wife and our 25th anniversary but I think it can be for anybody who’s in a relationship. We all have anniversaries and memories, not my usual style of song but it’s always good to throw in a curve ball!”

Taken from Byford’s upcoming first solo album School Of Hard Knocks (set for release 21.02.20 via Silver Lining Music), ‘Me And You’ is also now available as a 7” single, to get your copy visit www.biffbyford.com

With his roots firmly in The North of England, Biff has earned the right to be considered The Heavy Metal Bard Of The North and his debut album reflects the man and his personality, his loves and his musical versatility.

School Of Hard Knocks fulfils Biff Byford’s long-standing wish to explore rock ‘n’ roll a little more. The album is a personal journey highlighting his life and his passionate interests, from the history of the Middle Ages to growing up in the industrial North. A classic, masterfully constructed old-school British hard rock album, School Of Hard Knocks embraces a variety of musical genres and includes the Yorkshire folk classic ‘Scarborough Fair’, famously covered by Simon and Garfunkel. Byford and Fredrik Åkesson’s arrangement breathes new life into the legendary song.

Watch the previously released videos for ‘Welcome To The Show’ and ‘School Of Hard Knocks’ HERE.

Byford recently announced his first ever solo tour dates. The tour begins in the UK in April and continues to Europe in May.

The show, in the form of ‘An evening with…’, will be split into two halves. The first features Biff in conversation with Don Jamieson (American comedian and star of VH1 Classic’s That Metal Show) on all aspects of his life and career. After the break Biff and his band will play some new songs, covers and, maybe, a Saxon song or two.

“It’s a show I’ve wanted to do for a long time and one which I don’t think has been done in hard rock before. It’ll be something different and a lot of fun.”

Tickets are available from myticket.co.uk

Tickets are available from all usual outlets and agents.

As a special bonus, fans buying tickets prior to 2nd of March 2020 for the European shows only will receive a personally signed 10”x8” photo together with entry into a draw to win one of 10 VIP Meet and Greets for each show.

The English North is everything you saw in Game of Thrones and more. It is the true heart of England, the region where its soul resides, and Biff Byford has earned the right to be considered its true heavy metal bard.

Biff takes on not just tales and stories from his heart and soul, but also investigates the Middle Ages and Medieval history amongst other subjects.

“I’m singing about my past of course and about things I like, but mostly I wanted it to reflect me, my personality and my life. Song-wise it’s more diverse and not just focused on heavy metal. I wanted it to be a slice of the music I like, from metal, to rock ‘n’ roll. I’m a guy who’s just as happy listening to Metallica or Judy Garland, because as long as it’s great and entertains me, then what more do I need?”

From the spoken word introduction of ‘Inquisitor’ with its stoic, poetic take on the Spanish Inquisition to the autobiographical, old-school ‘Wheels of Steel’ era thrust of ‘Welcome to the Show’ and ‘School of Hard Knocks’, you’ll get to know Byford supremely well over the 11 tracks which comprise the album.

“One of my favourite is ‘The Pit and the Pendulum’, which is quite ‘prog metal’ and I love that. I’m a big prog rock fan and was a huge fan of Yes back in the day and being a musician-bass-player myself, the musicianship in bands like that really caught me. There’s a version of ‘Throw Down the Sword’ by Wishbone Ash, and the reason I did that was because it was the first song I ever heard that was anything to do with history in the sense of battles and war, and was really the thing which started me on the road to writing historically-driven songs.”

There is also a wonderful version of the Simon & Garfunkel classic ‘Scarborough Fair’, with Byford and Fredrik Åkesson (from Opeth) creating a new arrangement which gives the legend new life.

“It’s a traditional medieval song, and the story goes that Paul Simon happened to hear somebody playing it in Whitby, which is just down the road from Scarborough” laughs Biff, “But I wanted something which represented Yorkshire and it is a Yorkshire folk song, so we tried a new arrangement which made it a little heavier, and it works really well.”

On School of Hard Knocks, Byford worked with Fredrik Åkesson (Opeth) on guitars, Christian Lundqvist on drums and Gus Macricostas on bass (Biff himself played a spot of four string thunder too!).

Biff is also planning some live shows next year, events which will continue the theme of breaking new ground:

“I’m going to do a ‘words-and-music’ tour in small venues. The first part will be me in conversation with the audience about anything really, from heart attacks to sex, drugs, rock ‘n’ roll, old times, new times, friends, enemies and whatever anyone wants to chat about… Then bringing out a band and playing some new songs, covers and maybe end with a Saxon song or two. I’m still working out the details, but it’s a show I’ve wanted to do for a long time and one which I don’t think has been done in hard rock before. It’ll be something different and a lot of fun.”

School of Hard Knocks not only achieves the goal of providing full bore entertainment, it fulfils a long-standing Biff Byford’s wish to explore rock ‘n’ roll a little more.

“It’s been great to break new ground, explore new territories and work with some old friends and having waited so long to make this album, I have to say, I am delighted with it! It has a whole range of styles, from the ridiculously heavy to ballads, and it is certainly my album.”