SLASH: Video Of “Bent To Fly” Acoustic On Norwegian TV 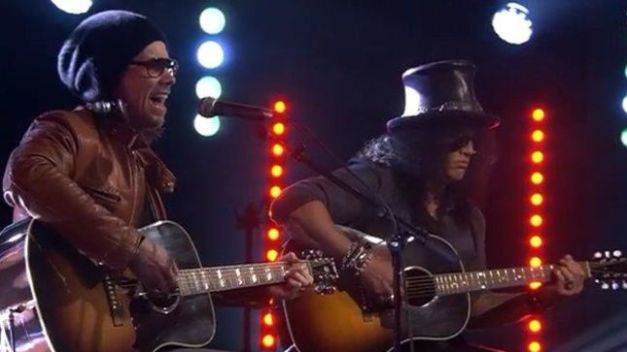 On November 7th, SLASH and MYLES KENNEDY were guests on the Norwegian / Swedish  television talk show, Skavlan, reports Bravewords.com. The pair played an acoustic version of the song “Bent To Fly”, from their new album World On Fire. See the performance video, as well an an interview clip with Slash below.

Remaining 2014 tour dates for Slash Featuring Myles Kennedy & The Conspirators are as listed:

The upcoming issue of Sweden Rock Magazine, in stores on October 21, includes a seven-page long article about W.A.S.P. guitarist Doug Blair‘s Carreer. W.A.S.P.-fans who are not subscribers should immediately obtain a subscription via this link. Even fans of Slash should turn to when a Slash t-shirt is included as an extra bonus!” 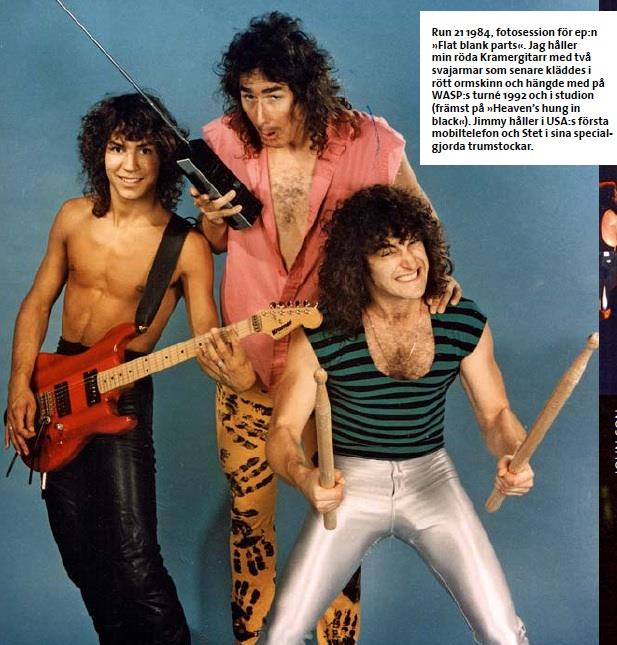 From 2003 to 2006 the festival lasted three days and had by then featured some of the biggest acts in metal and rock. From 2007 the festival has been expanded to four days and will feature approximately 120 different bands/artists.

Posted by tarjavirmakari on September 17, 2014
Posted in: Int. News. Tagged: Myles Kennedy And The Conspirators, Slash, World on Fire. Leave a comment 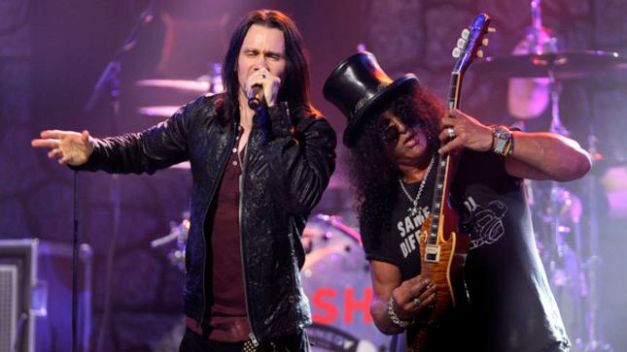 SLASH Featuring MYLES KENNEDY AND THE CONSPIRATORS unleashed their new album “World On Fire” on September 16th, via Slash’s own label Dik Hayd International, reports Bravewords, distributed through Caroline. Listen to the new album streaming in full below.

On Friday, September 19, the Grammy winner and Rock N’ Roll Hall of Famer Slash will be on hand at Universal Studios Hollywood to unveil the new maze Clowns 3D Music By Slash at Halloween Horror Nights. This collaboration with prolific guitarist Slash marks the first time a musician has created an original maze score for the popular event. Later that night, Slash will receive an Eyegore Award which honors influential entertainment professionals for bringing the horror genre to life within the movie, television and music industries. Slash will join a roster of today’s leading Hollywood horror icons at the show including Robert Rodriguez (Sin City, From Dusk Till Dawn, Grindhouse) and John Landis (An American Werewolf in London, Michael Jackson’s ‘Thriller’, The Blues Brothers) and many more. Following the annual Eyegore Awards, Slash and his bandmate Myles Kennedy will perform “Nothing Left To Fear”, the title song for his first-ever motion picture (2013) he co-produced through his film/TV production company Slasher Films. 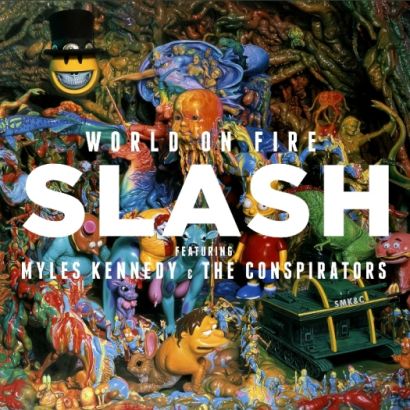 On Saturday, September 20th, Slash will do a complete takeover of AXS TV with the Slash Bash 2014 kicking off at 10 AM, ET/7 AM, PT. The day-long event is loaded with the best that hard rock and heavy metal has to offer. Packed with exclusive interstitial content, the spectacular features interviews with Slash, as well as music videos; live performances by Slash with Myles Kennedy & the Conspirators, Iron Maiden, Led Zeppelin, KISS, and AC/DC; and is headlined by the television premiere of the all-new documentary Ernie Ball Presents: Real To Reel With Slash airing at 8 PM, ET/5 PM, PT. Watch the sizzle reel for AXS TV’s Slash Bash 2014:

Beginning Tuesday, September 23rd, Slash will celebrate the release of World On Fire by returning to the iconic guitarist’s stomping grounds with a series of three very special sold-out club shows: September 23rd (The Troubadour) and then, moving up the hill to the world-famous Sunset Strip, September 25th (The Roxy) and September 26th (The Whisky A Go Go).

These shows are presented by and honor the 50-year anniversary of the beloved musician retailer Guitar Center. For more information, go to SlashOnline.com. Fans can be a part of history as Guitar Center will present Slash featuring Myles Kennedy and The Conspirators Live From the Roxy, to be broadcast on national television on DIRECTV’s Audience Network (Ch 239) November 9th at 8 PM. The 90-minute full rock concert will be filmed in stunning 4k and 5.1 surround sound. Fans can enter to win a VIP trip for two to see The Roxy show and take home an Epiphone Les Paul signed by the legendary guitarist, visit Guitarcenter.com/Slash to win.

The World On Fire disc marks Slash’s third solo offering and second album with his official band The Conspirators which features Myles Kennedy (vocals), Brent Fitz (drums) and Todd Kerns (bass). For World On Fire, Slash and the band worked with producer Michael “Elvis” Baskette (Alter Bridge, Falling In Reverse, Incubus) to create a powerful new turn for the band in 17 songs. World On Fire is the follow-up to 2012’s Apocalyptic Love which debuted at #4 on the Billboard Top 200 chart and earned Slash two No. 1 US rock radio hits – his first-ever solo – with “You’re A Lie” and “Standing In The Sun”. Slash officially began recording as a solo artist with his self-titled 2010 debut album which employed a different vocalist on each track of his first album including Ozzy Osbourne, Fergie and Myles Kennedy among others.

Catch Slash featuring Myles Kennedy and The Conspirators on the road through the fall. Expect more dates to be announced for early 2015.

SLASH: Why PAUL STANLEY Told Me To Go F**k Myself

Slash has commented on a story in Paul Stanley‘s autobiography in which the KISS frontman claimed that he had to teach the former GUNS N’ ROSES guitarist a pretty harsh lesson in rock and roll diplomacy more than 25 years ago, according to Blabbermouth.net.

In “Face The Music: A Life Exposed”, Stanley recalled the time he was asked to meet with the members of GUNS N’ ROSES, who were about to start work on their now-classic debut album, “Appetite For Destruction” album. Although Stanley claims he wasn’t all that impressed at first, describing guitarist Izzy Stradlin as “unconscious, with drool coming out of the side of his mouth,” and Slash as “half-comatose,” the KISS guitarist-vocalist was nice enough to show Slash how to tune his guitar in the five-string open-G method preferred by Keith Richards, and offered to put the GN’R axeman in touch with people who could get him free guitars. Paul then went to go see GUNS N’ ROSES play two small Los Angeles-area club shows, which he described as “stupendous.” According to Ultimate Classic Rock, it was an incident at the second of those concerts that created the initial rift between Slash and Stanley. “They weren’t happy with the guy mixing their sound,” Stanley wrote in his book. “And Slash asked me out of the blue to help out. Decades later, Slash’s recollections of the night would be faulty at best. He liked to pretend I had dared to meddle with their sound.”

Stanley continued: “Immediately after my interactions with the band, I started to hear lots of stories Slash was saying behind my back — he called me gay, made fun of my clothes, all sorts of things designed to give him some sort of rock credibility at my expense. This was years before his top hat, sunglasses and dangling cigarette became a cartoon costume that he would continue to milk with the best of us for decades.”

According to Stanley, he next spoke to Slash a few months later when the GN’R guitarist called up to see if Stanley could still set him up with those free guitars. “You want me to help you get guitars after you went around saying all that shit about me behind my back?” Stanley said he told Slash. “You know, one thing you’re going to have to learn is not to air your dirty laundry in public. Nice knowing you. Go fuck yourself.”

In a recent interview with Germany’s Rock Hard magazine, Slash revealed that he hadn’t yet read Stanley’s book, but more or less confirmed the KISS frontman’s version of events. He said (see video below): “What happened was… I don’t wanna bring it all up again… But he had come around to produce GUNS N’ ROSES way back in the day, before we actually made the first record [1987’s ‘Appetite For Destruction’]. And at some point, we decided we didn’t… We never, actually, were interested in working with him. But we sort of had him around because he was Steve Adler’s [original GUNS N’ ROSES drummer] hero. Anyway, and so, at that time, I’d done an interview for the ‘Calendar’ [section] in the [Los Angeles] Times, and I’d said something derogatory about him. And then, months later, [I] realized that he had an arrangement with B.C. Rich, and I was looking to try and get a guitar to record the ‘Appetite’ record, and asked him if he would hook me up with some B.C. Riches. And he said something along the lines of, ‘You shouldn’t air your dirty laundry in public,’ having to do with him. ‘So, no, I won’t help you.’ And I was, like, ‘OK.’ And we didn’t speak for years after that. It was only until roughly 2006 that we got reacquainted when I was doing the KISS ‘Rock Honors’ for VH1 and we sort of let bygones be bygones. And so we’re more or less cool now.” 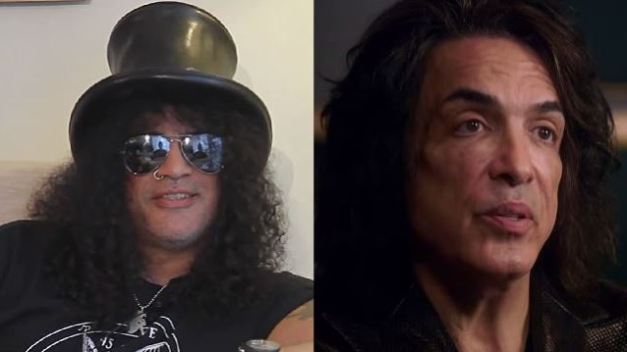 Posted by aliblackdiamond on May 4, 2014
Posted in: Int. News. Tagged: Myles Kennedy And The Conspirators, Slash. Leave a comment

Guitarist SLASH has announced via his official Facebook page that his new album, featuring MYLES KENNEDY AND THE CONSPIRATORS is almost complete:

“Mix is finished on the new record! Mastering next weekend. Artwork is set. Will announce the title soon. Can’t wait to unleash it!”

To hear more about what Slash and co. have to say about the upcoming album, check the recent Reel To Reel video clip below:

For more information on Slash, check this location. 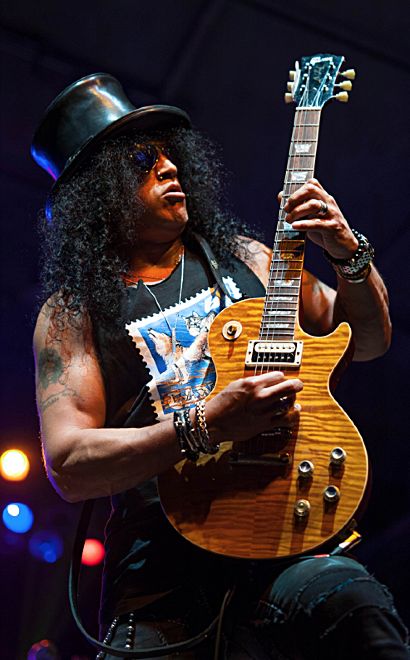 Yesterday, April 8, AEROSMITH performed at the world-famous Hollywood venue Whisky a Go Go in a 35 minutes invite-only show announcing the band’s upcoming “Let Rock Rule” -tour in North America. During the show SLASH joined AEROSMITH on stage. Live Nation has posted on their Youtube Channel the entire show video footage, check it out below:

Catch Aerosmith and Slash on a North American tour in 2014 on the Let Rock Rule Tour! Check out the tour dates below: 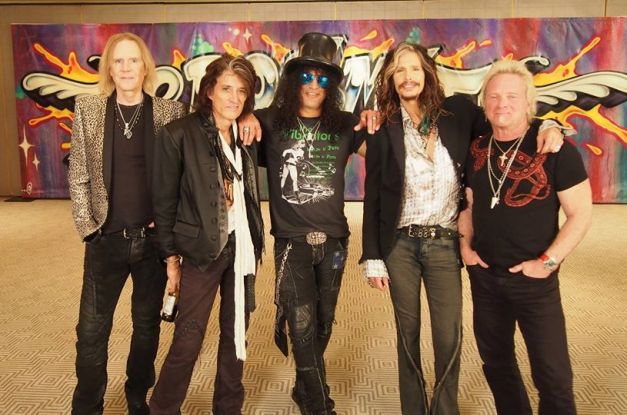