SLIPKNOT co-founder and original drummer Joey Jordison has passed away at 46. According to his family, he died “peacefully in his sleep”.

Joey Jordison’s family stated “We are heartbroken to share the news that Joey Jordison, prolific drummer, musician and artist passed away peacefully in his sleep on July 26, 2021. He was 46. Joey’s death has left us with empty hearts and feelings of indescribable sorrow. To those that knew Joey, understood his quick wit, his gentle personality, giant heart and his love for all things family and music. The family of Joey have asked that friends, fans and media understandably respect our need for privacy and peace at this incredibly difficult time. The family will hold a private funeral service and asks the media and public to respect their wishes.”

SLIPKNOT’s VMan Demands A Lot From The Bass Butler 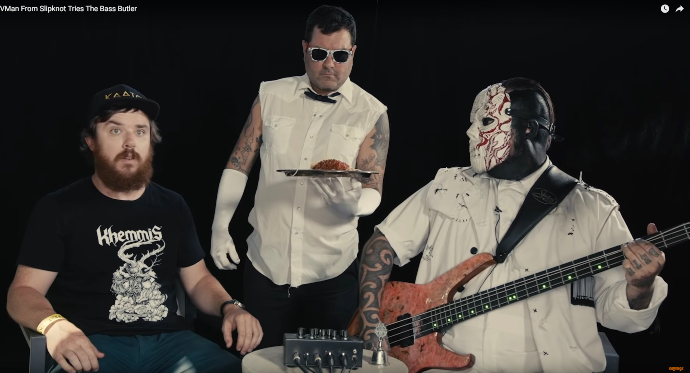 A commanding VMan from SLIPKNOT summons a complete performance from Orange Amplification’s Bass Butler in their new video and discovers an entire Bi-Amp bass rig in a pedal. No porky pies! See the video below.

VMan, bass player with the biggest metal group of their generation, Slipknot, wants his Butler to supervise and coordinate his bass playing requirements and perform other related tech duties. Alex Auxier, Global Artist Relations Manager at Orange Amplification, demonstrates how the new Bass Butler can do most things –  except get pasta from the Amalfi coast or find the beer! No hand bell required!

The compact Bass Butler serves up everything from bright vintage tones to floor-splitting, wall-crumbling modern destruction. With its direct XLR output, built in compressor and foot controllable ‘dirty’ guitar channel, the Bass Butler is probably the only pedal a bassist will ever need.

See the Bass Butler at the Orange Amplification booth #4644, Hall D where all the other Orange products can also be seen. Orangeamps.com/

Wacken Open Air has announced that the American metal institution SLIPKNOT will perform for the first time at W:O:A 2020, set to take place on July 31st – August 1st! Read below.

The band, founded in 1995 in Iowa, is not only known for the iconic masks of its members, but also for their extensive live performances with groundbreaking show effects. A sophisticated light and pyro show meets an only occasionally controlled madness, which mocks all comparisons with other bands.

And of course everything is right on the musical front too, as the album We Are Not Your Kind, which was released earlier this year, once again impressively proved. With songs like Nero Forte the band links to their classic hits like Psychosocial, while the experimental Spiders opens up new musical territory for the musicians.

We are proud to finally welcome this so important band to Wacken and to fulfill one of the biggest wishes of our fans since many years. We are looking forward to an extraordinary performance!

See you in Wacken Maggots, Rain or Shine!

Posted by tarjavirmakari on May 5, 2017
Posted in: Int. News. Tagged: “The Shape”, slipknot. Leave a comment 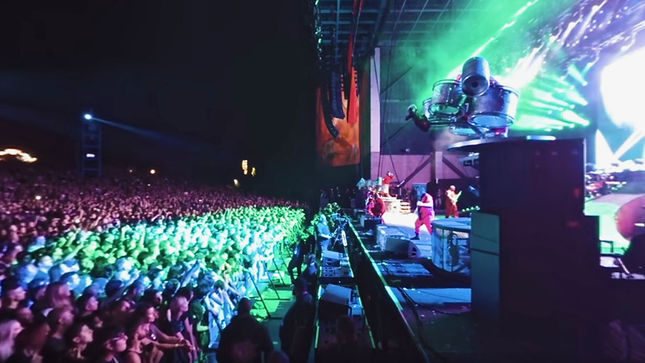 Global rock juggernaut SLIPKNOT have achieved yet another milestone in their already landmark career, issued Bravewords.com. The Grammy Award-winning band recently saw its YouTube channel exceed 1 billion total views and have marked the occasion with an extraordinary new 360° video shot live at Knotfest and directed by the band’s own Shawn “Clown” Crahan. “The Shape” – first found on 2001’s RIAA platinum certified classic album Iowa, but performed live for the very first time here – is available for streaming below.

Milestones like this one are nothing new to Slipknot, and they speak to the power of a deep connection with millions around the world. This is not mere consumption. The very fact that this achievement is being celebrated with the release of a fan-favorite track from deep in the band’s history, shot using the most cutting edge technology, is an indicator of a band paving their own way, while millions follow, with more joining every day. Indeed, .5: The Gray Chapter – Slipknot’s RIAA Gold certified fifth studio album and first since 2008’s RIAA Platinum certified chart-topper, All Hope Is Gone – made a stunning chart debut upon its October 2014 arrival, entering the SoundScan/Billboard 200 chart at #1 with sales in excess of 131,000 albums – the highest debut for a hard rock record that year. Furthermore, the album made an explosive chart impact around the globe, with #1 debuts in Japan, Australia, Canada, Russia, and Switzerland, alongside top 5 debuts in the United Kingdom, Germany, Ireland, Austria, New Zealand, Mexico, Denmark, and Finland.

.5: The Gray Chapter spawned a series of blockbuster singles, including the RIAA gold certified, #2 rock radio sensation “The Devil In I” “Custer,” and “Killpop,” the latter a top 10 Mainstream Rock smash. Each were joined by companion videos, all of which rank among the band’s most popular, with “The Devil In I” – directed by the band’s Shawn “Clown” Crahan – now exceeding 130 million total views at YouTube alone.

Slipknot spent much of the past two years on an epic world tour supporting .5: The Gray Chapter. The marathon schedule included a summer 2016 North American trek joined by Marilyn Manson and Of Mice & Men, hard rock festivals around the planet (including Germany’s Rock am Ring and Rock im Park, the United Kingdom’s Download Festival, France’s Hellfest, and Australia/New Zealand’s Soundwave), as well as September 2016’s record-shattering Ozzfest Meets Knotfest. The Live Nation-produced event saw Slipknot’s hugely successful Knotfest festival brand unite with the legendary Ozzfest for what proved the biggest North American metal festival of all time, drawing over 75,000 to San Bernardino, CA’s San Manuel Amphitheater & Festival Grounds for an all-star weekend highlighted by Slipknot’s first-ever live performance of Iowa in its entirety.

Roadrunner Records artists Slipknot emerged at the tail end of the 20th century and quickly established itself as the most enigmatic, provocative, and aggressive collective of the modern era. 1999’s Slipknot stands as a true milestone. The album fast earned 2x RIAA platinum certification, with each of Slipknot’s following releases – including four video albums – all receiving additional platinum certifications in the US and around the globe. All told, the band has 11 platinum and 38 gold record certifications worldwide.

Slipknot fans everywhere can join the official Slipknot community, Outside The Nine, to receive pre-sale access, interact with the band, connect and share with other fans around the world. The official Slipknot: Outside the Nine app (presented by Vixlet®) is available now on the iTunes App Store and Google Play. 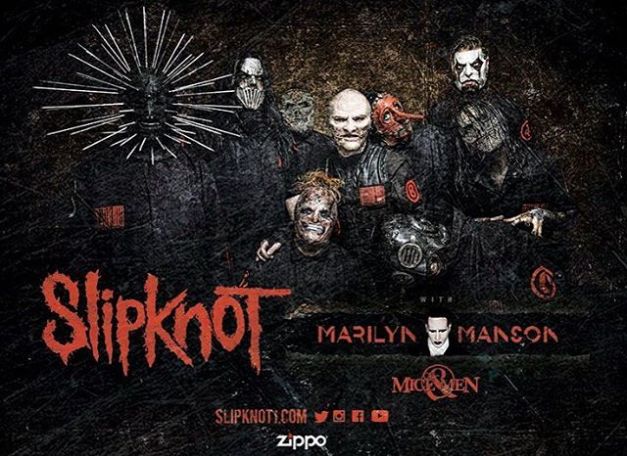 SLIPKNOT have announced their summer dates; a massive tour with Marilyn Manson and Of Mice & Men. General on-sale March 4th at 10:00 AM local time. Get all the dates and info HERE.

SIKTH To Join SLIPKNOT On Their UK Tour

Now the band are set to keep the momentum going in 2016 by revealing that they will support SLIPKNOT on their UK tour next month. This run of shows will see them playing arenas across the UK as well as 2 nights at London’s Alexandra Palace. Vocalist Mikee Goodman comments:

“It’s insane to be supporting someone as huge as Slipknot and playing arenas every night! We’ve never had this kind of opportunity before! I remember when they first came out , they changed the scene. We’re fans, so it’s an honour to be asked to tour with such a band!”

Recorded at Lincoln’s Chapel Studios and produced by Dan Weller and Justin Hill (mixed by Forrester Savell – Karnivool, Animals As Leaders, Dead Letter Circus) ‘Opacities’ was described by guitarist Dan Weller as a “more thoughtful, heavier, more refined’ record, demonstrated in the video for ‘Philistine Philosophies’, which was directed and created by Mikee W Goodman 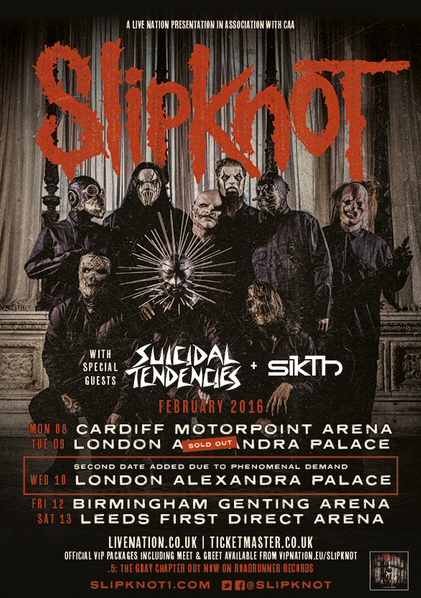