Since 2005, SONIC SYNDICATE has been pounding away at the international music scene touring Europe, North America and Asia. The new album is to be released October 14th 2016 on Despotz Records, followed by the Maximalism European tour with Amaranthe and Smash Into Pieces. The band describes their new coming album “Confessions” as a new start for SONIC SYNDICATE.

“We have CONFESSIONS to get out to the world: On October 14th we will release our brand new album CONFESSIONS and we can not think of a better way of doing it than to celebrate with our fans.

With that said, we’re excited to officially reveal that we’ll be hitting the road with Amaranthe across Europe in October / November. Amaranthe has a similar relationship to their fans, and we know that this is going to be one of the most heartfelt and intimate tours ever. Opening band, Smash Into Pieces also brings their own style. Musically we complement each other to the point that the whole evening with all shows will be an adventure for the crowd. This isn’t only going to be memorable, people will say this is how all tours should be.”
/Sonic Syndicate

Vocalist Nathan J Biggs comments:
“As you could imagine we are super excited to be signing to Despotz Records based here in Stockholm, Sweden, we couldn’t imagine a better place to call home. When the possibility of us working together first came up with this modern, creative & forward thinking team we pretty much had our mind set that this was where we belong. This is an exciting new chapter for both Sonic Syndicate and Despotz.”

In late June, 2016 the band entered Purple Skull Music to record their new album “CONFESSIONS” with producer Kritoffer Folin, the new album is set to be the bands most diverse and unique work to date.

Posted by tarjavirmakari on January 7, 2015
Posted in: News. Tagged: "THE APOCALYPSE DJ", CHECKMATE, Smash Into Pieces. Leave a comment

The band has in a year gone from being “up-commers” on the “Scandinavian/European rock-stage” to become a well-known rock band that tours all of Scandinavia / Europe / Japan and supporting World-artists such as Alter Bridge, Skillet, Twisted Sister, Sabaton, Amaranthe, Engel, Among others.

In February this year the band visited Finland for the first time, supporting platinum-selling artist Amaranthe, and in October they did their first headline-tour in Finland, playing 5 shows in 4 days. 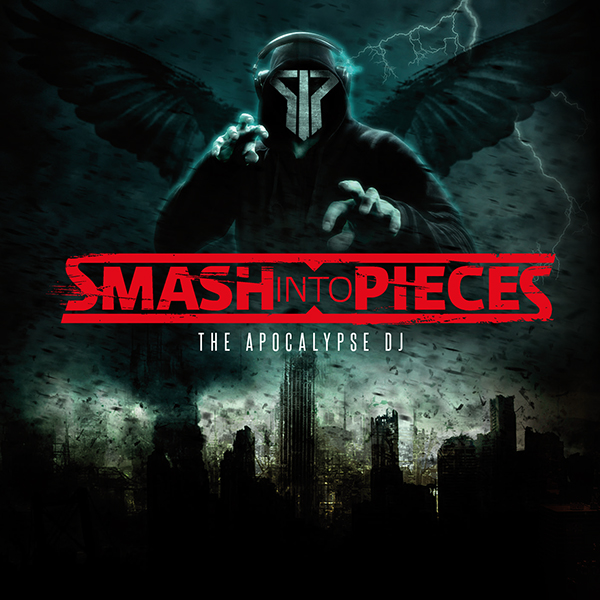 Now SMASH INTO PIECES is set to release their single “Checkmate” in January and their second album “THE APOCALYPSE DJ”, via Sony/Gain Production, in February, and on the third of March they are launching their first European – headline-tour passing through Germany, Spain, Italy, England (UK) and Finland. In total they will play four shows in Finland: 25th March at Pub Kaste (JYVÄSKYLÄ), 26th at Nosturi (HELSINKI), 27th and 28th March yet to be announced.

“Music is religion. The Apocalypse DJ is the creator. Anything standing between us and our dreams, we Smash Into Pieces!”

“We are all born on the endless Disaster Highway, where you can travel for a lifetime without going nowhere, where life sucks and then you die.?Through music, The Apocalypse DJ brought us together, chose our path and made us go our own way into the unknown. No matter where this journey takes us, we reached out for our dreams and we gave it all. The Apocalypse DJ is our savior.”

Posted by tarjavirmakari on March 14, 2013
Posted in: News. Tagged: Avatar, Engel, Smash Into Pieces, Tour Of The Dead. Leave a comment

ENGEL and AVATAR proudly present: Tour Of The Dead! This will be so much fun and we are really looking forward to playing and hanging out with our good friends in AVATAR. Check out and see if we are coming to a town near you. 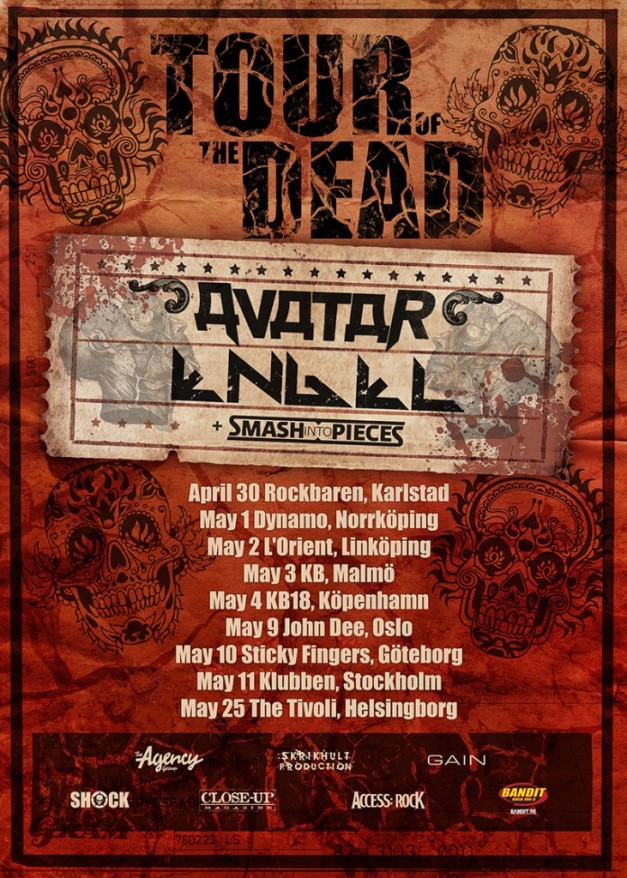 BEHEMOTH has issued the following:

BEHEMOTH have been confirmed for the Close-Up Båten cruise November 15–16. Europe’s craziest heavy metal cruise, will leave Stockholm, Sweden, on November 15 for Turku, Finland, and return the following day. Other bands scheduled to play on the boat are Turbonegro, Candlemass, Tiamat, Imperial State Electric, Always War, Thundermother and Smash Into Pieces.

Buy your tickets by calling Tallink Silja, the shipping company, at +46 8 666 33 33. Unfortunately, fans from abroad can’t order tickets to the cruise via the internet. When placing your order, don’t forget to include the booking code: CLOSETURBO.

For questions about bookings, e-mail: peter@closeupmagazine.net

Please note that the age limit on Close-Up Båten is 18 years.