The songs see the special featuring of Steve Sylvester – the legendary Death SS leader who is also in the official video of ‘Legion of the Night’, available here:

The double single was recorded at Eden Studios by Alessio Lucatti and mixed by Simone Mularoni at Domination Studio. Steve Sylvester’s parts were recorded at Freddy Delirio’s FP Recording.

The ‘Legion of the Night’ video was shot by Deathless Legacy drummer Frater Orion (Andrea Falaschi).

You can buy the vinyl (unsigned) directly from the Scarlet Records store, here. The transparent red 7″ of ‘Legion of the Night’, in a signed, limited edition of 300 copies, is available here. 100 of the 300 copies form the “Become a Vampire Kit” Collector’s Edition, available at this location.

The world has to deal with an endless, terrifying dark moment. In these hard times, DEATHLESS LEGACY surprise their fans with an unexpected sonic and visual delight.

About a year after the release of ‘Saturnalia’, a 24 minutes-single track concept-album about the mysteries of Ancient Rome, DEATHLESS LEGACY announce the very special release of a double 7″ featuring Steve Sylvester – leader, body and soul of the legendary horror metal masters Death SS.

A really intriguing and much awaited collaboration finally sees the light of the day – or rather the night. This how the band commented:

“Last summer we completed the recordings of two special singles featuring our spiritual father, Steve Sylvester. We recorded our tracks at Eden Studio with Alessio Lucatti and Simone Mularoni from Domination Studio took care of the mixing. Steve recorded his parts at Freddy Delirio’s FP Recording studios. And we can’t wait to share with all of you, oh damned souls, the obscure result we gave birth to. We would like to thank our daimon, for he inspired us to create something specifically tailored for this work. You’re gonna witness the utmost spawn of evil… Further details will be available soon”.

Italian dark rockers THE MUGSHOTS are set to release their new effort “Something Weird” on October 31th via Black Widow Records, celebrating the band’s XV anniversary. Today the band has unleashed a new lyric video:

October 31, 2016 will see the release of THE MUGSHOTS ‘ Something Weird, produced by Freddy Delirio (Death SS, H.A.R.E.M.) for Black Widow Records. Along with such announcement, the band released the first lyric video off the album. “Scream Again” features legendary Steve Sylvester (Death SS) on vocals, together with Freddy Delirio himself on keyboards and Ain Soph Aour (Necromass) on backing vocals. The song was co-written by rEnE from austrian dark-rockers Mayfair, whose latest album My Ghosts Inside was released early this year by german Pure Prog Records.

The album coverart was created by renowned Enzo Rizzi, the italian comic author whose Rock & Metal comic books have been sold-out more than once. The other drawings in the booklet are done by Stefano Alghisi (creator of Jim Morrison’s comic bio “Morrison Hotel”) whose drawings have been included in the italian edition of “Journey To The Center Of The Cramps” by Dick Porter.

An extra value to “Something Weird” is added by the presence of an all-star team of guest stars: 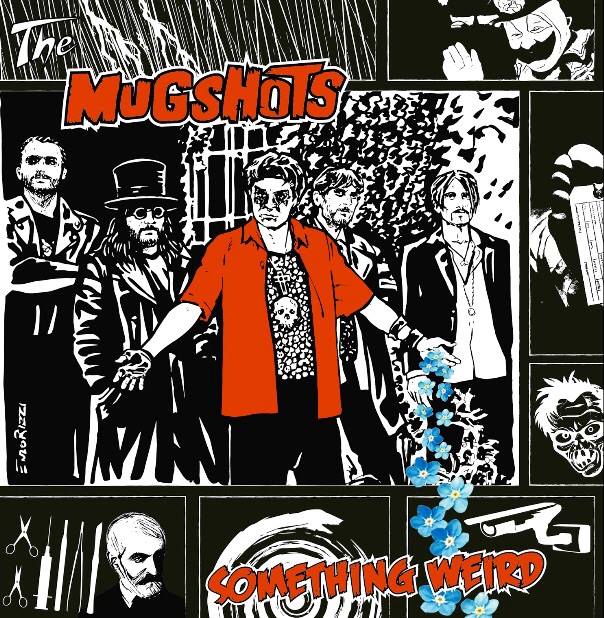