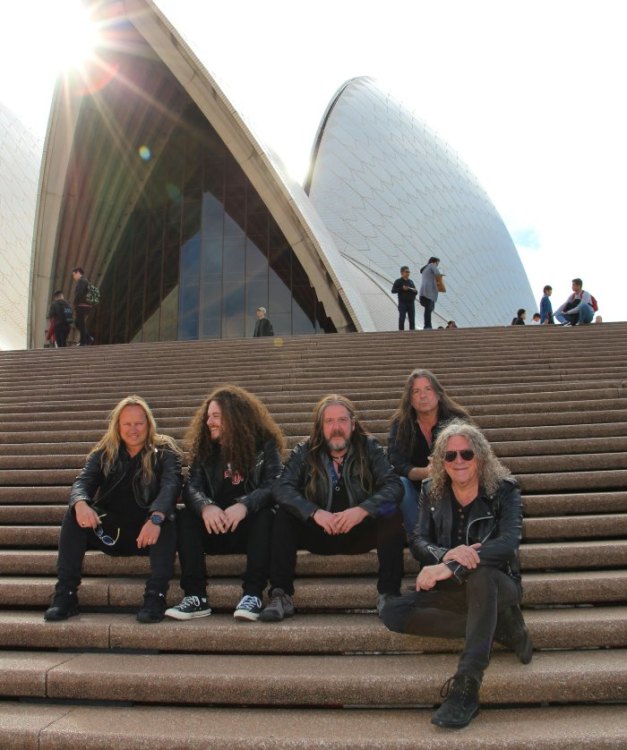 British Heavy Metallers TANK have premiered a new video ‘Walking Barefoot Over Glass’, taken from their lastest album “Re-Ignition”, out on Cleopatra Records. The video was filmed by Steve Mitchell at Croxtons, Melbourne Australia on 29th June 2019.

British Heavy Metal band TANK recently completed their first ever tour of Australia which was a great success. A return to the continent is already in the planning for 2020.

After Australia the band returned to Japan for the first time in 20 years for sold out shows in Tokyo and Osaka. While TANK were in Tokyo they teamed up with world famous Japanese tattoo artist Genko to design a special limited edition T-Shirt for the tour. The design process from start to finish can be seen here:

The band will be heading off to South America in August for shows in Argentina, Brazil, Paraguay and Colombia and then they will come off the road and start working on their next studio album which is as yet untitled. The album is scheduled for release in early 2020 through Metal Mind Productions.

Cliff Evans, guitar: We’re really excited about recording this new studio album as the band is really fired up at the moment and this is without doubt the most rockin’ line up we’ve ever had. Working with vocalist David Readman on our Re-Ignition album which was released earlier this year gave us the chance to take a more basic, raw edged approach to recording. His voice really works so well with our style of music and the new material we’re writing together is taking us in a slightly different direction to our previous albums which is a challenge we welcome.

Mick Tucker, guitar: After recording two TANK albums with former Rainbow and current Michael Schenker vocalist Doogie White plus one album with current Skid Row frontman ZP Theart, it’s now time to take things forward another step on our next studio album. We like to keep our music fresh and exciting so working with different vocalists/musicians will always bring a different dynamic to the band which keeps our music interesting and up to date.

British metal band TANK releases their first video from their latest album “Re-Ignition” which was released by Cleopatra Records.

The album features re-recordings of 11 classic TANK songs chosen from the first four albums and given a new lease of life with a much more up to date production and renewed energy.

The song chosen for the first video release is “W.M.L.A.”, watch it here:

Cliff Evans: W.M.L.A. is probably my all time favourite TANK song so it was a great pleasure to be able to re-record the song with our current line up and also make a cool video to go with it. It’s a laid back song with a nice groove but also really heavy. We filmed the video in my home town of Hastings.

TANK will be heading out on tour next week kicking off in Australia then on to Japan and South America.

Mick Tucker – We’re really looking forward to touring in Australia for the very first time and playing our own unique style of British metal to a new audience. It’s been 20 years since we last visited Japan so that’s going to be really cool to get back over there.

Posted by tarjavirmakari on May 28, 2019
Posted in: Int. News, News. Tagged: Tank. Leave a comment

TANK, the legendary NWOBHM band, have just revealed first dates of their world tour! It starts in Australia where the band will perform for the first time.

Cliff Evans comments: „We are very excited to be travelling to the other side of the world to play our first ever shows in Australia and we are very much looking forward to playing a selection of Tank’s classic metal anthems to our Australian fans.”

The band is currently working on the material for their new studio album scheduled for release in 2020.

UK metallers TANK have been busy in the studio recently putting the final polish on their latest metal offering which is certain to excite their legions of Filth Hounds around the world.

“Re-Ignition” is a tribute to the early days of TANK and features 11 classic TANK songs chosen from the first 4 albums which were originally released in the early 80’s. (Filth Hounds of Hades, Power of the Hunter, This Means War, Honour and Blood).

The album will be released worldwide (ex Japan) through Cleopatra Records on APRIL 26th 2019. The Japanese release will be through Rubicon Music.

1. Walking Barefoot Over Glass
2. Power Of the Hunter feat. Tom Angelripper (Sodom)
3. Just Like Something From Hell
4. (He Fell in Love with a) Stormtrooper
5. This Means War
6. Shellshock feat. Dani Filth (Cradle of  Filth)
7. W.M.L.A.
8. Honour and Blood
9. Blood, Guts and Beer
10. Echoes of a Distant Battle
11. The War Drags Ever On 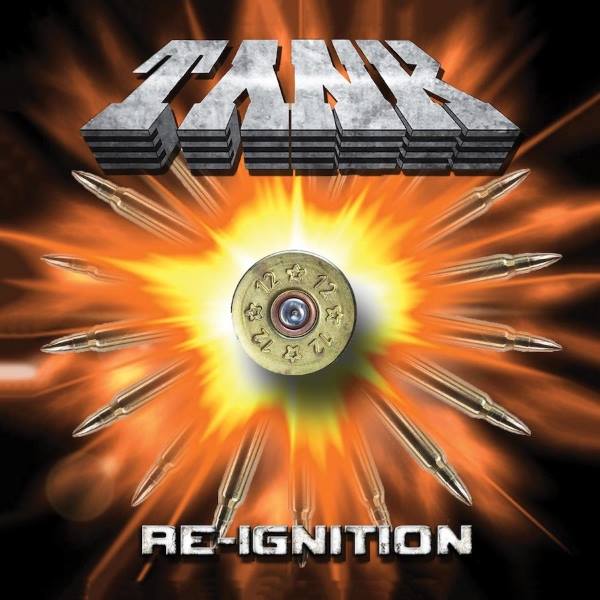 Many bands have admitted to have been influenced by TANK’s unique style of punk edged metal which was the trademark sound on the early albums. Those bands include Metallica, Nirvana and Sodom to name a few.

Mick Tucker:
Many of the songs from those classic albums are still present in our live set and we
are constantly being asked by our fans if we would ever consider re-recording any of
them. Those original recordings are timeless and will always be there but we thought
what harm can it do to give them a full metal makeover and inject new life into them.
They deserve it!

Cliff Evans:
We approached US label Cleopatra Records to see if they would be interested in
releasing the album. They jumped on it straight away and suggested the possibility of
adding some special guests on the album. Maybe some artists who were influenced
by TANK back in the 80’s. Great idea! We recruited Cradle of Filth frontman Dani Filth to record a version of ‘Shellshock’ in his own unique style and also German thrash legend Tom Angelripper from Sodom who has taken ‘Power of the Hunter’ to another insane level.

David Readman replaced former TANK vocalist and one time Dragonforce frontman ZP Theart after he was approached by Skid Row to join them on a permanent basis.
ZP recorded one album during his time with TANK (Valley of Tears) which became their best selling album since 1984’s Honour and Blood.

Prior to ZP the vocalist position was taken by former Rainbow frontman Doogie White who is now a permanent member of The Michael Schenker Experience. His contribution to TANK includes the albums War Machine and War Nation plus the bands first ever live DVD (War Machine Live!).

Cliff Evans:
We’ve always aimed high when it comes to recruiting new vocalists and musicians and
it’s always paid off. We’re very proud of the albums we’ve made with Doogie and ZP
and now this new album showcases the amazing vocal talent of David Readman.

TANK will embark on a run of shows in April 2019 when they’ll be visiting Holland, Belgium, Finland, Sweden and also their very first appearance in The Ukraine at the Volume Club in Kiev.

A full European tour is scheduled for September/October 2019 along with shows in Japan and South America. 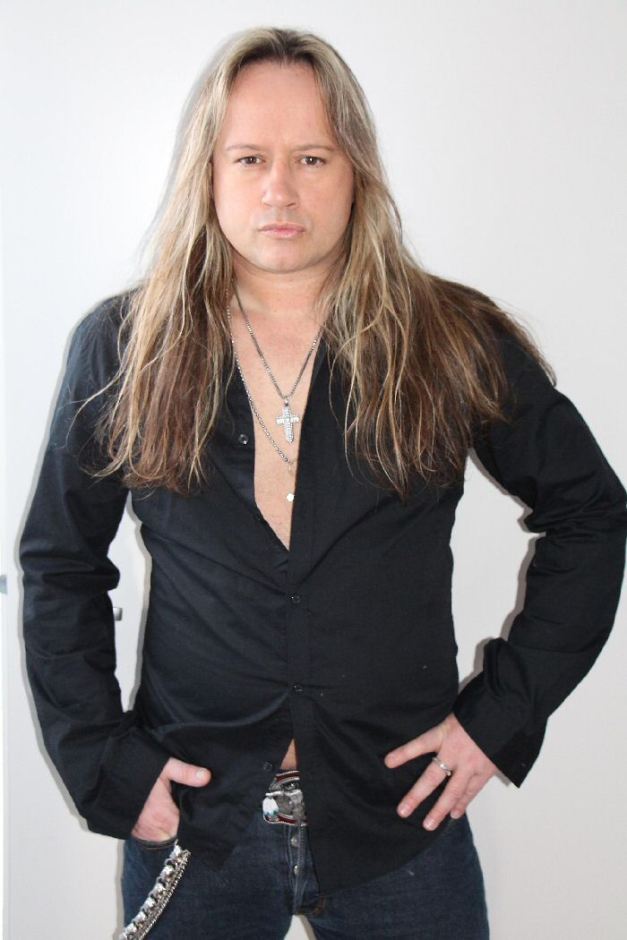 Cliff Evans: “We’re really pleased for ZP and hope that everything works out for him. He’s always been a massive fan of Skid Row so it must be so cool for him to be able to front those guys on stage and sing the songs he’s grown up with. We’ll miss touring and recording with ZP but we wish him all the very best for the future”.

Mick Tucker: “We recorded one of our best albums with ZP (‘Valley of Tears’) and shared the stage for many great shows around the world during the three years that we worked together. He will be missed but as usual we thrive on a challenge and are constantly looking to up our game and push the boundaries that little bit further. We’ve always been an admirer of Readman’s particular vocal style and range but never thought the opportunity would arise where it would be possible for us to work together”.

David Readman: “It feels great to make music with a British band with a vast musical history. It’s been over 20 years since I played in a British band, this is a sort of home coming for me. Mick also lives in the Netherlands, so many connections, I couldn’t miss this one.”

In recent years TANK have been fronted by some of the best rock vocalists around including former Rainbow frontman Doogie White, who recorded the “War Machine” and “War Nation” albums plus former Dragonforce and current Skid Row vocalist ZP Theart who’s featured on the best-selling album, “Valley of Tears”. With the addition of David Readman means that TANK can once again move forward into unchartered territory and take their trademark style of British rock to a whole new level.

Readman’s first live appearances with TANK will be in Hamburg (Pussy Galore) on July, 7th and the Rockharz Festival in Ballenstadt, Germany on July, 8th.

Here’s a little taster of what’s to come from the new David Readman fronted TANK: