Posted by tarjavirmakari on May 24, 2015
Posted in: Int. News, Reviews. Tagged: Jim Peterik, Last Band Standing, The Ides Of March. Leave a comment 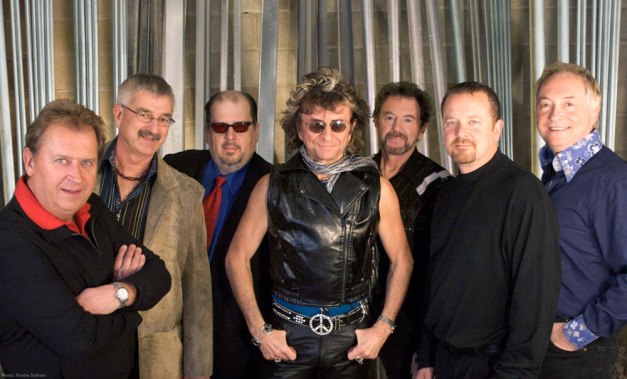 See the complete tracklisting below.

The Ides Of March – Last Band Standing. – The Definitive 50 Year Anniversary Collection Classic Rock doesn’t get any more classic than this! Jim Peterik is widely acclaimed not only as the writer of the run of Hard Rock hits his band Survivor landed on charts around the world, but also as co-creator of favourite singles and album tracks by 38 Special, Sammy Hagar, Lynyrd Skynyrd and others outside the Rock realm. His original band, The Ides Of March, was the outfit in which Jim initially developed and polished his songcraft , and this 4CD / 1 DVD box set charts the amazing 50-year musical journey that saw Jim and his high-school buddies (with the core members still in the line-up five decades on!) literally grow up in public, their own growth mirroring the ascent of the Classic Rock genre itself, with the lads from Chicago taking a cue from those four lads from Liverpool and their British Invasion cohorts, moving on to absorb elements of the exciting array of emerging sounds that rang out through the 60s and 70s, from the Byrds, on to Jimi Hendrix and Led Zeppelin, hints of Psychedelia, Soul, Blues, Funk, Gospel and Country Rock. 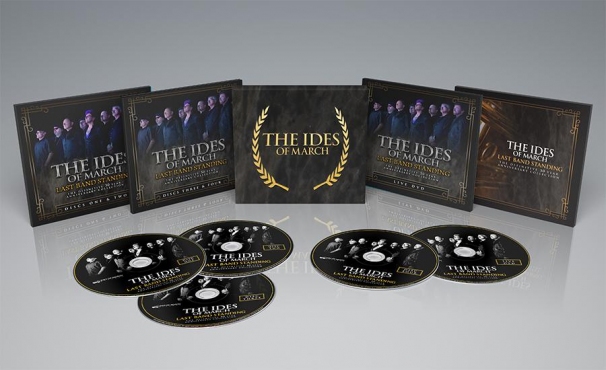 In his autobiography “Through The Eye Of The Tiger” (well worth reading for a refreshing change from the standard sex, drugs and scandal fare of many Rock bios), Jim observes that the band went through many musical changes before hitting on their own style in the early-to-mid 70s, prior to going on hiatus until the early 90s. However, that’s not to say that the Ides don’t (or didn’t!) have their own clear musical identity. Over the course of the 4 CDs (and one DVD), you can hear that they already had something special about them right from their first single, the Kinks / Who-influenced “Like It Or Lump It”, released in 1965, and this spark grew brighter through the early sides gathered on CD1, as they honed their trademark vocal harmonies, added a horn section, and Jim’s voice matured into a soulful, blues-infused baritone; these elements all converged perfectly on their 1970 chart-topper “Vehicle”, and you’d be hard pressed to find a funkier, groovier slice of horn-driven Rock anywhere (and if you want further evidence, check out the extras on the dvd, where none other than Tom Jones and Sammy Davis Jr groove on down with their own far-out versions, man!)

From that point on, the Ides had all the necessary tools to capitalise on the chops they’d worked up learning their trade on those early releases, and from that point on, you’ll hear them really flourish as they distill their influences into a distinctive Ides personality, eventually adding a touch of Poco / Eagles style Country Rock to their musical brew, their vocal harmonies rising to the standard set by those Californian contemporaries. Poco’s own Rusty Young makes a cameo on pedal steel on disc 3, which contains sought after tracks from their “World Woven” and “Midnight Oil” albums, collected here on CD for the first time.

After a hiatus, Jim reconvened the band in the early 90s, and CD4 shows the Ides reaping the benefit of his 80s work with Survivor and other Hard Rock luminaries, as he brings elements of the melodic style he helped pioneer back into the IOM’s subsequent material, while still retaining the varied stylistic approach that characterised their best 70s releases. In addition to a selection of live cuts from various eras, the band also lay down 3 fine new numbers, including title track “Last Man Standing”, an autobiographical account of the band’s path from high school shows, on to gigging with Led Zeppelin and the Allman Brothers, and rubbing shoulders with Beatles!

And the icing on this anniversary cake is a live DVD, filmed on home turf at the Chicago House of Blues, showing the band on potent form as they deliver their own classics and a selection of Jim’s co-written hits from Survivor, 38 Special and Sammy Hagar. On the strength of these effervescent concert performances, I for one would love to hear the band make a studio album along the lines of “The Ides of March Play The Jim Peterik Songbook”.

If you’re already a fan of Jim’s songwriting, then this box set allows you to see and hear a significant part of his musical history in chronological sequence, also showing him to be a first-class frontman, lead vocalist, and lead guitarist in his own right. And for those unfamiliar with the Ides of March, there’s a wealth of great songs to discover and enjoy here. Happy Anniversary guys, long may you Rock!

Live in Concert at the House of Blues, Chicago, May 31, 2014 (15 song set)
Last Band Standing (Music Video)
From the Vaults
Vehicle (with Buddy Guy)