BLODARV Sign To Soulseller Records, To Release New Full-Length “The Illuminating Darkness” In 2019

Black Metallers BLODARV have inked a deal with the Dutch record label SOULSELLER RECORDS for the release and world-wide distribution of the band’s upcoming full-length album “The Illuminating Darkness” which will be available in CD, Digital and 12″ Vinyl formats in 2019.

Aside from having recently signed bands such as USURPER, DEATHCULT, PATRIA and GRAVDAL to their roster, SOULSELLER RECORDS have also been instrumental in the official re-issues of various Black Metal classics from bands such as GORGOROTH, OPHTHALAMIA, VED BUENS ENDE, OLD FUNERAL, DEN SAAKALDTE, THORNIUM and ANCIENT, to name but a few.

Commenting on the decision to sign with SOULSELLER RECORDS, BLODARV had this to say:

We have to say that we are really looking forward to working with Soulseller –  a cooperation that will greatly benefit both the band and the fans. Soulseller have proven themselves to be a label of some note with a great many quality  releases over the years, and we are more than satisfied to be working with them on the upcoming album.

One of the things that was very important to us was that this album should also be released on Vinyl. Not only because many of our fans prefer vinyl over other formats, but also because as soon as we had written the first track, we all felt that vinyl was where it belonged, and,  as a consequence,  the whole album was created with that particular medium in mind.

Another aspect to signing with Soulseller was the availability issue.  Up until now, once we had sold out of our releases at the official BLODARV store in Denmark it has been extremely difficult, not to mention very expensive, for our European fans and followers to get their hands on them.  Ordering from Mexico, where our previous label and their distro were situated,  meant that fans in Europe were hit with taxes, customs charges and prohibitive postal costs, whilst we ourselves could only stock a very small number, as all our releases had been limited to 1,000 copies.  With Soulseller this will all change.

There are, of course, a few more reasons why we are looking forward to this co operation, not least of which are trust, shared visions and goals, dedication, artistic freedom, and the excellent communication we have with Soulseller.

More info about “The Illuminating Darkness”  will be available soon, but in the meantime BLODARV recently gave fans an insight into what they could expect from the album by premiering the track  “A dark trail of Death” which is available to stream or download at the following:

Posted by tarjavirmakari on September 14, 2018
Posted in: News. Tagged: "A Dark Trail of Death", "The Illuminating Darkness", Blodarv. Leave a comment 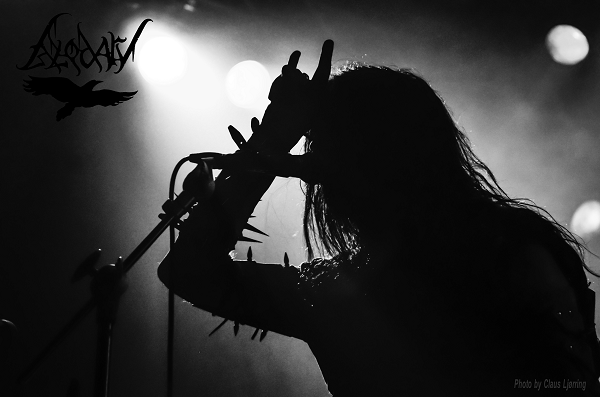 Until now, Danish Black Metallers BLODARV have been quite secretive when it comes to revealing details about their forthcoming full length album. In fact, the only thing that the band has so far revealed is that the title of the album would be “The Illuminating Darkness”.

The silence, however, is now about to be broken, as the band is premiering a track from “The Illuminating Darkness” in order to give fans a first taste of the dark and haunting journey that the album has in store for them.

The track, “A Dark Trail of Death”, can be streamed or downloaded with lyrics via the following:

Commenting on the choice of “A Dark Trail of Death”, BLODARV said:

“we are aware that it is usual for band premiering a track from a forthcoming album, to choose either the title track, or a track that “musically represents the entire album”. But BLODARV have never been your typical band, nor have we been known to do things the usual way, and this time it’s no different. In fact, “A Dark Trail of Death” stands out from the rest of “The Illuminating Darkness” in the sense that it’s the slowest song on the entire album.

“Whilst the rest of the tracks on “The Illuminating Darkness” are much more up-tempo, even compared to previous releases, we chose “A Dark Trail of Death” as a first taste of the upcoming album anyway because, even though it stands out tempo wise, it is still perfect to represent the entire album because it is soaked through with the essence and atmosphere of “The Illuminating Darkness”.