Legendary Norwegian outfit TROLLFEST is back, ready to deliver their groovy, energizing and K.A.O.S-infused sound to the masses! After gathering millions of streams on YouTube and Spotify, TROLLFEST will be joining Napalm Records for the next chapter of their career. Since forming in 2003, the band has played numerous shows all around the world, making appearances at Wacken Open Air, 70.000 Tons Of Metal and Summer Breeze, sharing the stage with ALESTORM, WINTERSUN,  KORPLIKAANI  and FINNTROLL, making a name for themselves as the pioneers of True Norwegian Balkan Metal!

In True Norwegian Balkan K.A.O.S., TROLLFEST release an energizing and bombastic re-recording of their classic “Der Jegermeister” to celebrate their signing to Napalm Records. “Der Jegermeister” is the magnificent, brilliant, wisdom super troll that loves to hunt and drink, and is a fan favorite at live shows! This re-recording will get you moshing on your sofa, raiding the kitchen for alcohol or wherever mother, wife, husband, partner, dog or cats hide them. Trolls never hide alcohol.

TrollfesT on signing with Napalm Records:
“There are few things more welcome than good news in tumultuous times and with that in mind it is with unbridled joy that we announce our signing to Napalm Records. We are excitedly excited about this excitement and have overwhelmingly positive feelings of exuberance toward this endeavor. It is a pure honor to work with such legends. Gleefully chipper and tremendously exalted, we cannot wait for the next chapter of TrollfesT history where world domination, millionaire status, private airplanes and studios built of beer are sure to only be the minor ingredients, that or we will continue to roam the outskirts of obscurity. Either way, we will enjoy ourselves stupendously.”

The Faroe Islands’ very own TÝR will return to North American this April with three of Europe’s finest folk exports in tow. “The Valor & Folklore Tour” will include Heidevolk, Trollfest, and Metsatöll with headliners Týr performing over 20 shows in cities across the USA and Canada. This is a rare chance for fans to catch this fine collection of folk all in one venue!

Týr front-man Heri Joensen comments: “We’re overjoyed to return to North America so soon, and especially happy to be headlining again. Our last North America run was very successful, and with the line-up we have this time, we are confident that it will be an even bigger blast for all who attend – bands and fans!” 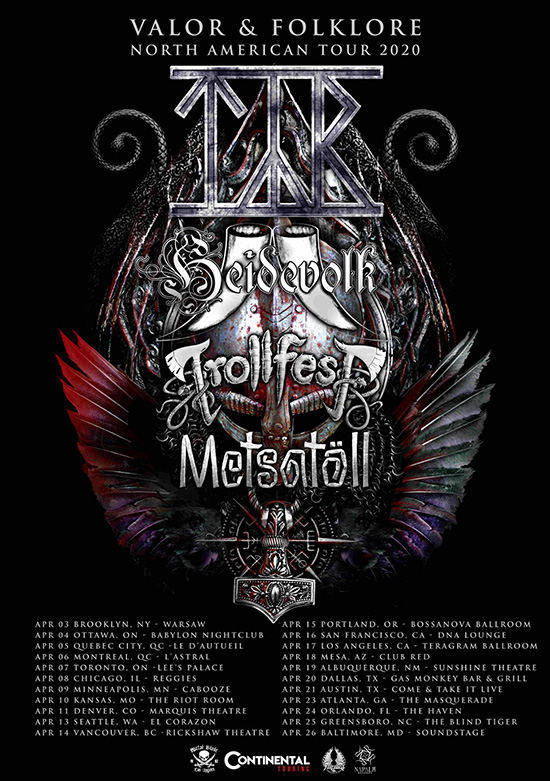 Known for their prolific nature – dropping their first five full-lengths in the space of just seven years – the six-year gap between Valkyrja (2013) and Hel is by far the longest between any two of their records. During that period the band toured hard, taking the album around the world, including a support run with Children Of Bodom in North America and two appearances on the 70,000 Tons Of Metal cruise. However, other factors played into this extended break between releases. “We approached this one differently because I learned that if I continue doing albums in the way we had up to now, I would die from a heart attack before I’m 50!” says guitarist/vocalist Heri Joensen. “That’s one of the reasons we changed our method and took such a long time on this one.” That this tactic has been beneficial is borne out in the finished product, which is perhaps more immersive than those that came before. “Musically it leans a bit towards our album, ‘Ragnarok‘ (2005),” states Thomsen. “It’s a bit more epic and also much better worked through than any of our previous albums.” It also marks the recording debut of drummer Tadeusz Rieckmann, who has manned the drum throne for Týr‘s live shows since 2016. 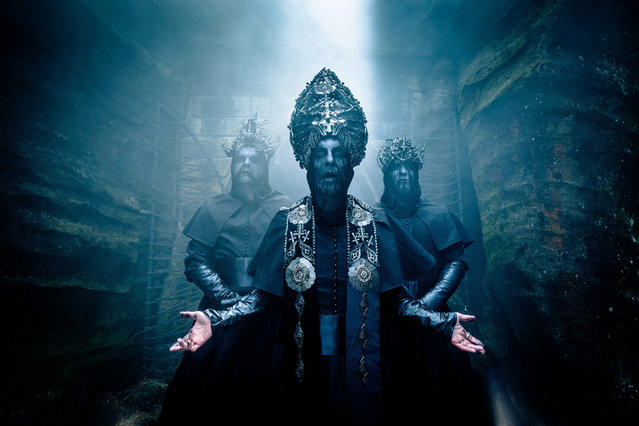 Portugal’s VAGOS METAL FEST has announced one of their headlining acts for a blasphemous summer of 2020, and confirmed Black Metal legends BEHEMOTH! Over the course of the last 28 years, BEHEMOTH have pushed the boundaries of death and black metal and heresy alike. While anti-Christian sentiment might seem like stale bread where most metal bands are concerned, for BEHEMOTH such ideas represent a very real threat to their physical freedom: Time and again, the government of their native Poland has charged them with various “crimes”. Mastermind Nergal and his bandmates — Orion, Inferno and Seth — have channeled all their anger and creative spirit into the passion of a distinctive sound, which influenced entire generations from all over the globe since decades. VAGOS METAL FEST is beyond proud to welcome the iconic band to their eclectic line-up in 2020, that already consists of high class names such as TESTAMENT, HARAKIRI FOR THE SKY, ASPHYX and TROLLFEST, with many more to be announced in the time ahead!

The 5th edition of VAGOS METAL FEST will be taking place between July 30th – August 1st 2020 in Vagos close to Porto, weekend passes are now available at THIS LOCATION! Start your holiday plans and join an ultimate, unforgettable metal trip under the sun of Portugal! 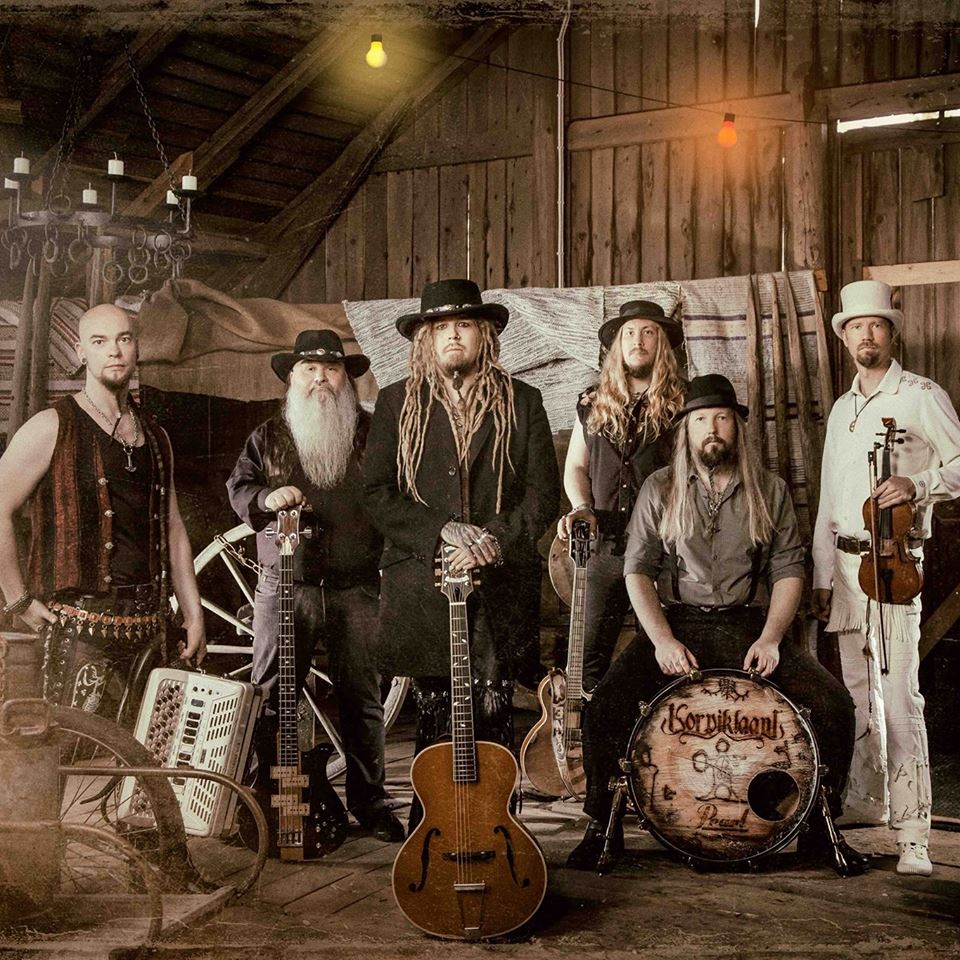 Finnish Folk Metal Superstars KORPIKLAANI recently kicked off 2019 with a bunch of successful Finnish shows. Next week, the group will embark on their highly anticipated European run with TURISAS and TROLLFEST. What better way to celebrate this tour than by revealing a brand new song? There’s none, that’s why KORPIKLAANI are happy to present a lyric video for ‘Øl Øl’, which features their longtime tour mates TROLLFEST. The track is taken from the band’s »Kulkija [Tour Edition]«, which is out now. Order now: http://nblast.de/KorpiklaaniKulkijaTE

Check out the single:

KORPIKLAANI‘s Jonne states, “Beer, sax & violins! What more do we need to say? We hope you enjoy this as much as we did with friends we love to drink and tour with.”TROLLFEST add, “We got super excited when one of our alltime favourite bands asked us to do a TROLLFEST version of this classic tune! Today we got to show the world the result. Grab a beer and enjoy ‘Øl Øl’. Much love from TROLLKLANI / KORPIFEST.”

The band have just released the video clip of the song ‘Hen Of Hades’, taken from the latest album.
Check it out here:

In support of the new record, the band will tour Europe in early 2018 to present the new material to the fans all over Europe. Together with the Finnish folk metal superstars KORPIKLAANI, their Russian companions in ARKONA and Dutch folk metallers HEIDEVOLK, the trolls will hit the stages again. At weekends, the program will be extended by additional acts. Find all dates below!

Order your physical copy or the digital version of “Helluva” here.

Scandal and tragedy!
TROLLFEST have been neglecting Norway for a long time! But fear not, redemption is at hand! In May, the Trolls will expand the expedition throughout their Motherland, and they are ready to spread their mad joy of playing, and of course their new album, “Helluva”, over the fjords, mountains and straight into your hearts. It will be the craziest norwegian metal show ever (that’s a garanty), bereft of self-importance and pretentiousness, but full of pride and radiance! TROLLFEST are in ecstasy over their latest creation, and “Helluva” will be showcased with both funk and ferocity! If you know what’s good for you; bring your best beer holding device, jump (or squat) on down to your local stage and join the madness! Kaos to the people!

And here is the Norwegian version if you are interested in learning some Norwegian:

Order your physical copy or the digital version of “Helluva” here: http://helluva.noiseart.eu/