The first single ‘Ship Of Dead’ from VULCANO‘s upcoming album doesn’t show any signs that the veterans are slowing down. In fact, it’s a vicious speed/black metal attack like only the South-American kings of the style are able to convey.

Not a band to rest on their 40(!) year career and highly influential cult status, speed/black metallers VULCANO is back with new music roughly one year and a half after their last studio album.

“Ship Of Dead” is the first single from the Brazilians’ upcoming new studio album, “Stone Orange”, to be released on Emanzipation Productions in early 2022. Guitarist Zhema Rodero comments about the song: “It’s a reference to drug users, addicts that don’t realize they’re in the hold of the Ship of Dead. It’s a fair warning to those who still have discernment. I’ve approached this theme in our back-catalog, since “The Man The Key The Best””.

Vulcano is a band that, by now, doesn’t need any introductions to any metal fan. It’s enough to say they got together in a middle of a turbulent socio-economical turmoil in Brazil, in 1982, in the city of Santos. Thus it’s a 40-year career, 13 studio albums, four live records, and two 7″ EPs, that just couldn’t be summed up in a few lines.

They were pioneers in Brazil and even in South America as a whole, putting in the most extreme metal stepping stone for bands that came after them and continue being formed. Their importance is also capital in the formation of the Norwegian second wave of black metal, with few of its key members citing the Brazilians as a direct influence.

“Stone Orange” is Vulcano’s 19th overall release in their career. How many bands can get to this mark and still be as relevant as the Brazilian extremists are today?

“Stone Orange” will be released in early 2022 via Emanzipation Productions.

The audio for each of the albums has been carefully restored and dynamically remastered. Each release has been repackaged in a way that honors the original artwork.  All three titles can be purchased HERE. 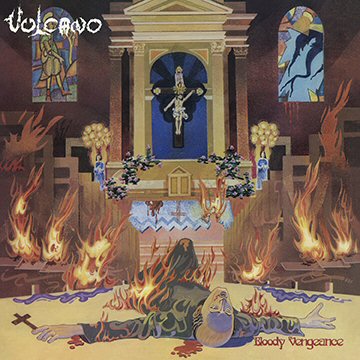 Formed in 1980, VULCANO is thought to be the first band from Brazil, and possibly South America, to play extreme metal. An early influence for the likes of SEPULTURA and SARCOFAGO, VULCANO’s primal blend of black, thrash and death metal sparked a flame that quickly spread across the mid-80s underground metal community.
Considered one of the most important albums in South American (and beyond) extreme metal, Bloody Vengeance is being reintroduced to a new generation of maniacs. Fully remastered and restored, the album is accompanied by a DVD that features a live performance from the 1986 Festival Da Morte. Greyhaze Records will reissue this cult classic as a six-panel digipak CD/DVD on May 18.
VULCANO will celebrate the reissue at this year’s Maryland Deathfest. The MDF set will be the band’s first-ever live performance on American soil. With no other U.S. dates in the works, MDF XIII looks to be the only chance to experience the madness that is VULCANO north of the equator.

The legendary Brazilian band VULCANO is hitting North American shores through PRC MUSIC in 2015! The 2014 album “Wholly Wicked” will be available in Canadian and American stores through UNIVERSAL and MVD in May 2015, right on time for the band’s first appearance at the highly popular Maryland Deathfest alongside bands like RAZOR, BULLDOZER, METAL CHURCH and OBITUARY to name but a few!