WOLVES IN THE THRONE ROOM are extremely proud to announce their return to the stage. The Band will be blazing across Europe in Fall 2021 with the merciless BLOOD INCANTATION and Stygian Bough (a collaboration between Bell Witch and Aerial Ruin).

WOLVES IN THE THRONE ROOM comments: “This will be a tour to remember. Join us!!!

Live Report: BEHEMOTH + AT THE GATES, WOLVES IN THE THRONE ROOM @ The Circus, Helsinki – January 29th, 2019

Posted by tarjavirmakari on January 30, 2019
Posted in: Int. News, Live Report, News. Tagged: At The Gates, Behemoth, I Loved You At Your Darkest, Nergal, The Satanist, Wolves In The Throne Room. Leave a comment 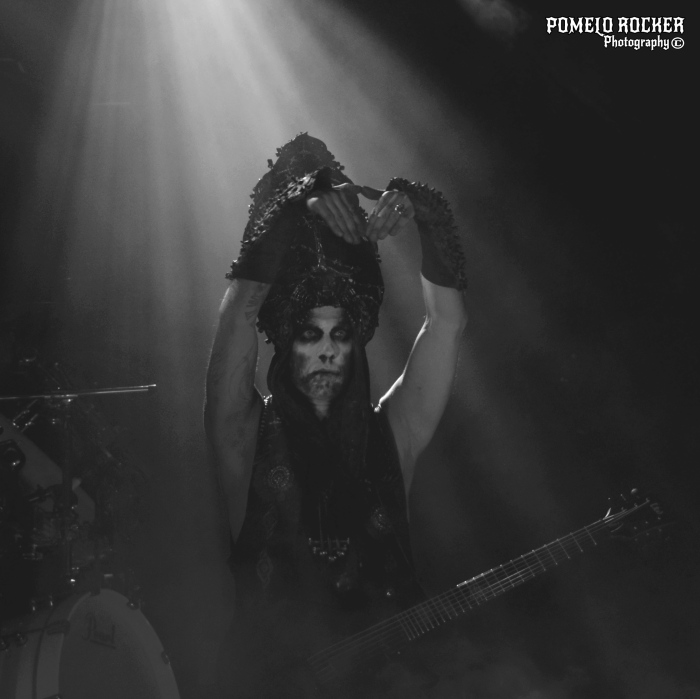 BEHEMOTH doesn’t really need any introductions. During the last few years they have achieved a mainstream status within the extreme metal world. This has to do a lot with the quality of their records and live performances, but also the provocative approach of frontman and leader Nergal, which has granted them a lot of media coverage in Poland and worldwide. That been said, they are far from a publicity trick and they’ve managed to maintain the standards and integrity of their music, surprising us last year with the release of the excellent “I Loved You at Your Darkest”, a magnificent follow-up to their acclaimed album “The Satanist” (2014).

After an intensive touring schedule of 2018, which took them through some of the main European summer festivals, but also around USA and their homeland Poland during the autumn. After a short break, BEHEMOTH started the new year with their Ecclesia Diabolica Evropa tour a few weeks ago in Germany. Tonight, they brought some devilish darkness to the cold Finnish capital, which is covered with a thick layer of snow at the moment. The venue chosen for this show was The Circus, a night club in the heart of Helsinki. I’m glad to see them this time in a smaller place, since I find extreme music difficult to fully enjoy in massive festivals because of all the noise.

The band in charge of opening fire was the American black metal ensemble WOLVES IN THE THRONE ROOM, with a short setlist that comprised mainly of songs from their latest album “Thrice Woven” (2017). Dark tunes such as ‘Angrboda’, ‘The Old Ones Are with Us’ and ‘Born from the Serpent’s Eye’ we the perfect way to start the evening. In their half an hour slot they managed to impress the audience with their atmospheric approach and effective use of musical tension. I’m quite surprised that the venue was full right from the beginning, considering it was a Tuesday evening. That makes me think that THE WOLVES had some true fans who came specially to see them.

The second ones to come to the stage were the Swedish pioneers of melodic death metal AT THE GATES. Coming from a neighbor country and with two great releases after a long hiatus, the band succeeded to keep the audience entertained. Their setlist included a lot of material from their latest studio efforts “To Drink from the Night Itself” (2018) and “At War with Reality” (2014). Nevertheless, the highlights of their show were the timeless classics from their 1995 masterpiece and genre-defining album “Slaughter of the Soul”, such as ‘Suicide Nation’, ‘Cold’, ‘Blinded by Fear’ and of course the title track. Although masters of their style, I must say they are not the most impressive live band when it comes to showmanship.

Before BEHEMOTH hit the stage, we knew we were in for a scary treat. From the background noise you could distinguish the creepy children voices of the ILAYD intro ‘Solve’, which help to build the atmosphere while we were impatiently waiting for the band. Right on schedule, the satanic-imagery inspired black curtain fell and the Polish four-piece made a dramatic entrance to the stage, covered in black masks. Their first brutal assault was ‘Wolves Ov Siberia’, one of their latest singles. For this song, they certainly did not spare on their pyrotechnics budget, giving it an extra touch of evil. ‘Daimonos’ was their first nod to their excellent “Evangelion” (2009). The drumming skills of Inferno on this track did not cease to impress me.

After a short magic ritual by theatrical Nergal, ‘Ora Pro Nobis Lucifer’ was the next tune to shock the audience. The charismatic frontman came very close to the crowd to deliver one of his catchiest riffs and left the stage for a costume change. ‘Bartzabel’ was definitely a performance to be remembered by all those who were there. While one of their slowest songs, it is also one of their heaviest in terms of malevolent atmosphere and dark power. The crowd reacted accordingly and very loudly for a Finnish audience. ‘Ov Fire and the Void’ brought back the speed and blastbeats together with awesome black/death metal riffing, lots of fireworks and enough energy to light up to whole city.

‘God = Dog’ is another highlight of their latest album. From that heavy bass intro by Orion, fierce riffing by Nergal and live guitarist Seth, blaspheme lyrics and frantic drumbeats, it is one my favorite tracks from ILYAYD and it works perfectly in the live setting. Nergal gave a speech about their relationship with the Finnish audience, which goes back to the nineties, and he thanked their loyal fans for this sold-out headlining show. With its Anthrax-inspired riff, ‘Conquer All’ kept the devilish fire burning. ‘Ecclesia Diabolica Catholica’, another catchy and spooky track from ILYAYD, was also received by the audience with a lot of praise. It seems like many of the attendants really dig the new album.

With ‘Decade of Therion’ they returned to their rawer sound of their early records, delivering one the finest songs from “Satanica” (1999). Although BEHEMOTH have refined their music in terms of songwriting, I don’t think they have made big compromises or went too commercial by any means. A proof of this was the masterful ‘Blow Your Trumpets Gabriel’, which builds up progressively towards a display of brutal technicality. They continued in the same line of work with ‘Slaves Shall Serve’, a vicious blasting masterpiece from Demigod (2004). They finish the song by showing the finger and spitting at the audience in a very classy manner.

‘Chant for Eschaton 2000’ contains some of my favorites BEHEMOTH riffs and was interpreted flawlessly. After a short break, just long enough to catch their breath and change costumes once more, they struck again with ‘Lucifer’, the longest song on their setlist. With an extensive and enigmatic intro, this epic eight-minute oeuvre prepared the way for their final stab, which turned out to be a lethal one. I’m talking about ‘We Are the Next 1000 Years’, a spectacular ending for an amazing live experience. ‘Coagvla’, the outro of their latest album was the unequivocal sign that the show was over. The crowd cheers their idols for one last time.

Music wise it was a perfect evening, but after such a magnificent display of dark power by three excellent bands, the biggest challenge was to get out the venue, with over half an hour queue to get your jacket back. This is a very typical problem in Finnish venues, they charge your almost four euros for the cloakroom and then they hire three people to handle thousands of jackets. There’s clearly some room for improvement there. Anyways, the Polish masters proved once more that they deserve their place in the pantheon of contemporary extreme music. BEHEMOTH are indeed a true powerhouse when it comes to live performances and they show no signs of slowing down on the highway to hell.

Posted by meldelacroix on October 22, 2011
Posted in: Reviews. Tagged: Celestial Lineage, Wolves In The Throne Room. Leave a comment


MINERAL METAL
Wet my eyes, foam, red leaves, carpets of veins and this earth that I dig,  and I bell, caress my skin of brambles…
Rain-like us, as if we were elusive, and volatile but we’ll penetrate the Earth, sperm among worms, we fig to give birth. See, I eat, I scrape the grub, the Lake-studded star Vault will be my candle, when you ‘ll close the eyes I will recognize you.
I ‘ll climb up the volcanic cascade range, I’ll break my nails, planted in the rock, stroking your breasts a last time, relying on our Lord love, inalienable, sap of our most blacks hopes of our deepest desires.
Once, your body of ice and  me we will be snakes, magic circle and seed forever buried, petrified fleshs in absolute terms, their heavy steps will be flights of birds.
Nematodes triumphants. Know, the rats do not dance with the Eagles. Your last breath will be blizzard, when I will pull out your heart. You’ll never leave me….

After 8 years of existence, the eco-brothers Weaver from Olympia in Washington State (Nathan & Aaron, respectively vocal-guitar / keyboard-drums) out of the edge of the Woods (hidden no doubt behind a thick red curtain…) and under the mysterious surname “Wolves In The Throne Room” lay a new stone in their darkest work.

New log that this third dark and majestic opus of the announced tryptic, “Celestial Lineage” reap our souls as death mowing our ultimate ignominy. After the previous “Two Hunters” (2007) and the vindictive and luminous “Black Cascade” of 2009 where almost they touched to the sublime, taste friend here the new offering. Claim of reducers strictures, moves such a Viper this tortuous metal, grit, black in its transcript but dazzling in its remarks. Post avant-garde Black Metal, pagan in intention and in the acts, in its musical treatment (its radicalism and integrity that flows from the closer Anaal Nathrakh and  Neurosis, the best of both worlds in short….), hate in echo (Burzum and Darkthrone spirits are summoned), this malleable, living, perfect biothope for hatching a Metal potting soil capturing the power of the Sun as a proud Maple and drawing his natural authority from the inmost depths of the soil, this potting soil fills us, nourishes and satisfies us. It is art we are talking about, when Black Metal found its core identity, vocation: illuminate the Darkness. Produced by Randall Dunn and with Jessika Kenney’s faithful vocalizations, Wolves In The Throne Room again installs masterpiece among their new album.

Progressive, majestic, epic and introspective 7 parts (including two interstitials air, possible minerals) are a trip at the end of the Earth (deer hunters ?…), in the caverns of the human psyche, in the swamps of our announced common future.

“Prayer of transformation” (and its 11 mn as a chill wind), a telluric doom end to this absolute masterpiece, perfect epitaph for such purpose: magnify the elusive.

From the depths of Black Metal from Scandinavian obediance and experimental music, contemplative, naturalistic, folk in its american gnarled roots, Wolves In The Throne Room here dig foundations (even if Agalloch had marked field and in the meantime the brave Falls Of Rauros) from which arises a solid building (new Church?), reformist basement of a scene (did I say the word “mindset”?…) often narrowconservative and cautious.

Before Black Metal was of flesh and blood.
Today, with Wolves In The Throne Room, it has (finally) a Soul-