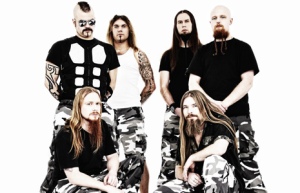 Swedish metallers SABATON have recruited DRAGONFORCE bassist Frédéric Leclercq to play guitar on their upcoming European tour. He will be filling in for regular SABATON guitarist Rikard Sundén, who “has decided to multiply himself and will have his first kid at this time,” according to a statement released by the band.

The group adds, “Of course, it’s the highest wish of SABATON to tour with all six members, but this time Rikard wanted to pass and to ensure that the fans that come to these shows will get a good show we wanted to bring in a person with both great musical talent as well as a great stage act together with a chemistry that we know fits in SABATON. We are sure that Frédéric is that person. This is, of course, a temporary situation, Frédéric is still a full member of DRAGONFORCE and Rikard is still the guitar player of SABATON. For the American tour that starts in April, Rikard will be on stage again, ready to rock and a hopefully a bit richer in life.”

SABATON‘s “World War Tour 2011” of Europe is scheduled to kick off on March 3 in Esch-sur-Alzette, Luxembourg.