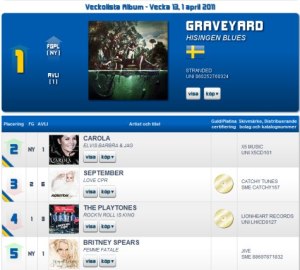 “Hisingen Blues”, the second full-length album from the Gothenburg, Sweden-based psychedelic doom rock band GRAVEYARD, has entered the official chart in the group’s home country at position No. 1. The CD, which will be released in North America on April 19 via Nuclear Blast Records, was produced, recorded, and mixed in 100 percent analog by Don Alsterberg (JOSÉ GONZALES, JUNIP, SOUNDTRACK OF OUR LIVES, THE INTERNATIONAL NOISE CONSPIRACY) at Don Pierre Studios in Gothenburg, Sweden.

The band shares details about the album artist, Ulf Lundén: “We wanted a cover that wasn’t your average rock/metal cover, and our friend Ulf Lundén was just the right guy to do it. We had seen his work for his own band, BOMBUS, and we knew he had a wild imagination. So we just let him loose. He put us up against the green screen, took his photos and that was that. A couple of weeks later, he showed us what he had done. We were astonished by his work, a perfectionist indeed. We got what we asked for, a cover that isn’t average. Rich with details, swamp/jungle feeling, weirdness and a lurking evil feel to it.”

A limited-edition seven-inch picture disc of the title track, “Hisingen Blues”, backed with the exclusive vinyl track “Granny And Davis” and featuring different artwork was released through Nuclear Blast Germany’s mail-order on February 25 and was made available via Nuclear Blast USA’s webstore on March 15. This release is limited to 500 copies worldwide.