IN THIS MOMENT: Set To Film First-Ever Live DVD

Posted by Stargazer on May 13, 2013
Posted in: Int. News. Tagged: IN THIS MOMENT. Leave a comment

Southern California’s female fronted hard rockers, IN THIS MOMENT, are gearing up to record their first ever DVD which is being shot at their upcoming tour stop on May 21st in Madison, WI at the Orpheum Theater. IN THIS MOMENT has partnered up with long time supporter, radio station WJJO, as part of their Mayday Maylay concert series.  The band has a bunch of surprises in store for this show including rarely played songs from their catalog and an all-new stage show created specifically for this concert.  Also performing that night are special guests Nonpoint and Gemini Syndrome. The concert is being directed by Brad Golowin who is known for his work with Miss May I and 10 Years to name a few.

IN THIS MOMENT is currently out on a North American tour in support of their latest Century Records release “Blood”.  The album was released in August of 2012 where it debuted at #15 on the US Billboard Top 200 selling over 20,000 copies the first week.  “Blood” marks the band’s highest chart debut of their career.  To date, the album has scanned over 150,000 units and has spawned the singles “Blood” and “Adrenalize.”  “Adrenalize” is currently #18 on Mediabase Active Rock charts in the USA.  The video for “Adrenalize” has been viewed almost 500,000 times and can be seen below. The band will be touring the US throughout May making stops at the KQRA BBQ (Springfield, MO), KQRC Rockfest (Kansas City, MO), Rock On The Range (Columbus, OH) before wrapping on May 22nd in Minneapolis, MN at Mill City Nights. Afterwards IN THIS MOMENT will head to Europe in June for select dates overseas.

Just in time for their upcoming European run IN THIS MOMENT will release a relaunch of their album “Blood” that will come as a 2CD for a fan-friendly price. CD2 of “Blood (Re-Issue + Bonus)” will be out June 3rd, 2013 and has the following tracks added: 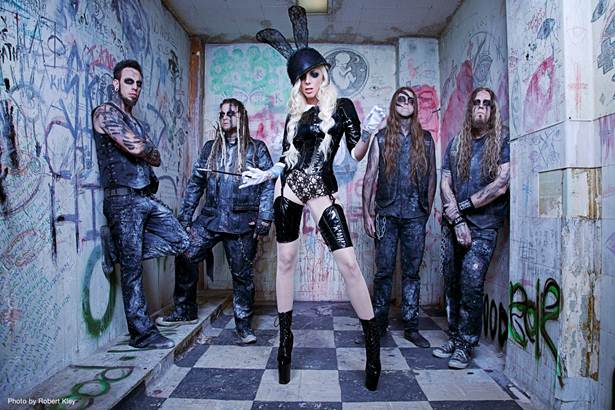