German heavy metallers ALPHA TIGER just wrapped a very successful 2013, with the album “Beneath The Surface” via Century Media Records, a string of festival appearances (Wacken Festival, Bang Your Head etc.) and finally in support of QUEENSRYCHE.

Now they start an even more busy year with the release of the 12“ Vinyl Maxi, titled “Lady Liberty”, on February 28th through vinyl specialist HIGH ROLLER RECORDS (under exclusive license from Century Media). The release will be strictly limited to just 500 copies in two different colours and contains three songs. It will be supported by a new video, available two weeks prior to the record release.

Peter Langforth, mastermind of ALPHA TIGER, comments on the concept of the EP: „The world is facing dramatic changes. More and more, governments and the people are talking different languages; this rift is being felt in all layers of society. In times where financial powers pull the strings and mass media are used to manipulate, deceive and distract from the real problems, it’s getting more and more important that the people express their own interests on the streets. „Lady Liberty“ is our expressive statement against a „Big Brother“ society. The song is full of energy and straight to the point. What remains are our pure emotions and aggressions against this unjust society. The fitting sound was created in the Area 51 studio by Tommy Newton, who gave the song a very powerful mix. The B Side contains the song „Men or Machines“, originally published on our first album, and completely re-arranged and extended by two minutes. „Child in the Haze“ completes the 12“ and is a rerecording from our Satin Black’s days, originally written in 2008.“ 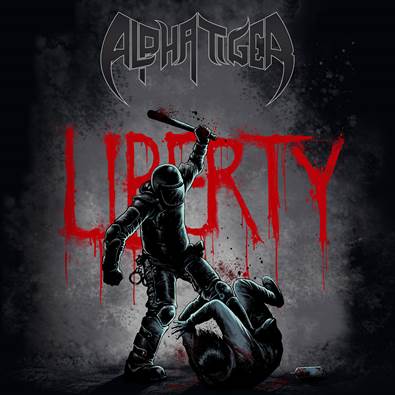