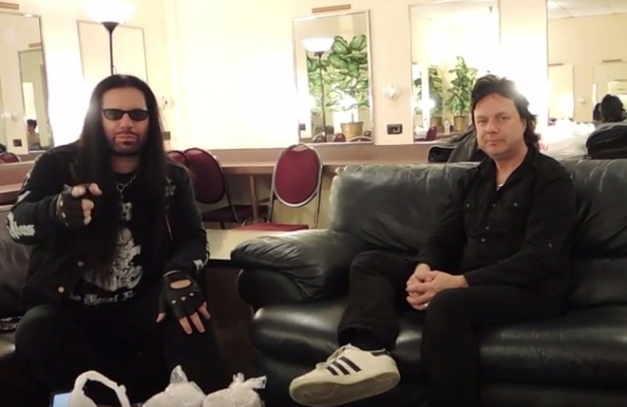 On what it is like to be in the King Diamond band for so many years.

“I have been in the band for about 30 years, it’s crazy, time just flies, it’s been awesome.” Andy LaRocque

“I always was really into the theatrically stuff on stage, like Alice Cooper, Kiss, Black Sabbath, stuff like that. I look at it in a different way I see it more as a theatrical rock horror show than a satanic thing.” Andy LaRocque

“We are going to have a little break after this tour and after that break we are going to start writing music for the next album. We have some riffs but I’m sure once we start getting into the process it’s going to be lots of brainstorming, somewhere around February 2016.” Andy LaRocque

On their favorite guitar solos off the King Diamond Albums

“One that I remember being one of the first solos I  recorded on the demo which was actually the solo for  Welcome Home. Which I still think is a pretty good solo, we are still playing that song . I still like it”. Andy LaRocque

“In this set list none of my solos are in there. For me it’s the Black Horseman  outro solo is really nice. I kind of changed it a bit the way Michael Denner played it on the originally album. That one is pretty good one.”  Michael Wead