Interview with GLEN DROVER: “I think it’s the strongest album I’ve ever done”

Well known for his time with MEGADETH, KING DIAMOND and his own power metal band EIDOLON plus more besides, Canadian guitarist Glen Drover is back with a brand new project –  WALLS OF BLOOD. The album, titled “Imperium” featuring an esteemed assortment of metal vocalists such as Tim ‘Ripper’ Owens (JUDAS PRIEST, ICED EARTH), Chuck Billy (TESTAMENT), Todd La Torre (QUEENSRŸCHE) and Henning Basse (METALLIUM, FIREWIND), is set for release on 22nd February via Metalville.

MSF Senior Manager Alison Booth recently caught up with Glen to chat about the album in more detail, as well as various other subjects, including the story of a career highlight at the UK’s Download Festival. You can read a few excerpts from the conversation below and the full interview is on the audio player:

“I think it’s the strongest album I’ve ever done, period. This album for me, you know I worked on it sporadically over six years and I’m just really proud, I love the whole album. I couldn’t be happier right now.

It was all people that I really wanted to work with and some, in fact most of them, were singers I might not have worked with before, but wanted to.

And then there were situations where I would approach somebody that I wanted to have on the album and then I would write a song around his type of style – something I knew he would probably be comfortable with and be able to deliver.” 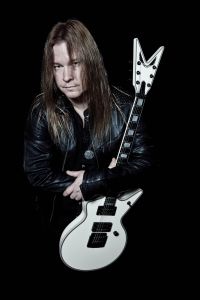 On Matt Cuthbertson, who provides vocals on the track ‘Walls Of Blood’:

“Yeah he did a really good job. The band Untimely Demise, they’re from Canada and I really liked his, he’s got the raspy, growly voice like a lot of bands do – but he has more of an identity I think. I find, with all due respect to the bands that do sound similar in the vocal department, sometimes I can’t tell them apart. But there are some that have an identity, ‘oh yeah, that’s him or that’s her’ or whatever, you know. And he’s one of those guys and I just thought he’ll do really well on the song. Shawn wrote the lyrics and away we went.”

Talking about what’s next for WALLS OF BLOOD and if there’s any possibility of touring, Glen revealed:

“I’m gonna wait to see how it’s received and how I feel about it down the road. One thing I can say is that I probably wouldn’t do another album with multiple vocalists, because I’ve already done that now and it’s a little bit harder. I’m very, very happy that I did it and I’m extremely proud of the album like I mentioned, but I don’t think I would do that again. I would do an album with one singer.

As far as touring, no not at this point because of everything I just said, but is it possible that I could streamline it where it’s one line-up of say four guys, yeah and play shows, absolutely possible. If I’m gonna do it, I’m gonna know when the time comes and it would be very easy to do that. I have a couple of vocalists in mind, one in particular, I’m not gonna mention his name, that I know would be able to do all the different material that’s on the album.”

Reflecting on highlights from his career, Glen reminisced about a MEGADETH performance:

“Highlights, there’s a few. And you know, speaking of the UK, I gotta say, that’s probably if I had to pick one particular event it would’ve been the first time we played Download. We played there twice, but you know you can’t forget that.

We played on the main stage. I remember we were back waiting as the into was about to be rolled. And I was looking out in the field on the main stage at Download and there was a lot of holes. I went ‘oh shit, I was hoping it was going to be full!’ And then just before the intro, I looked my other way and in droves there’s all these people coming down the pathway ’cause one band just finished on another stage. By the time we got on stage there was not a piece of grass you could see, it was just so electric. As far as you could see, everybody was going nuts, you could feel it – it was so heavy with electricity. We played for fifty minutes and it felt like five minutes, literally. That has to be the pinnacle for me.”