SOEN, one of the revelations of the latest decade when it comes to prog rock, visited the Finnish capital two nights ago, after four years of absence in the context of the second European leg of their Lotus Tour. Due to the well-deserved critical acclaim received by their newest record, released last February, this was one of the most expected concerts for progressive rock fans in Finland. Together with the Swedes, we also got the chance to check out the current local prog-sensation WHEEL and the Italian ensemble THE PRICE. Because the concert was organized on a rainy Wednesday evening, people started showing up little by little to The Circus night club, located in the city center of Helsinki.

I arrived on time in order to witness THE PRICE’s show, which was received with a bit of indifference by the audience. The cocky, borderline insulting attitude of the vocalist Axel Capurro, who repeatedly complained at the Finns for being silent, made things a bit awkward. It is understandable that they want to see the audience excited, but they should try to make it happen naturally and not by telling the crowd what to do. They played the best tracks of their album “A Second Chance to Rise”, including highlights such as ‘Stormy Weather’ and ‘Tears Roll Down’. Even though their music was nice, it wasn’t so special for the vocalist to assume that people would go immediately crazy about it.

Things went completely different with the next act. After a short break, WHEEL came to the stage, and even if his vocalist/guitarist James Lascelles is originally from England and addressed the audience in his native language, the band was received very well from the start and they connected immediately with the crowd. Because their bassist Mikko Määttä is currently injured, the talented Jyri Helko replaced him, doing a great job. Although they are a relatively young band with only one full-length album so far (the excellent “Moving Backwards”), they showed confidence, virtuosity and professionalism throughout their set. James mentioned that they almost had to cancel the presentation due to vocal issues, but their overall performance wasn’t affected by that.

They started their show with ‘Lacking’, building slowly the atmosphere with its intricate rhythms. All the members of the band wore black hoods, adding an element of enigma to their performance. They kept their lightshow to the minimum. Next in line was ‘Vultures’, a track that synthesizes the best elements of their music. This song proves that you can write a three-minute prog-rock track without being derivative, while keeping the novelty and complexity. ‘Tyrant’ and ‘Where the Pieces Lie’ kept the energy flowing, preparing everyone for the big finale, which came with ‘Wheel’, a dynamic ten-minute song which worked as an effective display of their musicianship. They are clearly one of the most promising bands in the Finnish prog-rock scene.

When SOEN appeared, the crowd went instantly crazy. The impressive stage presence of vocalist Joel Ekelöf made everyone focus their attention on him. They opened their set with ‘Covent’, one of the finest tracks off “Lotus”, featuring a mesmerizing vocal performance and also great guitar work by Cody Ford. The sound was a bit too loud in the front row, as the bass drums and bass sounded a bit saturated. Otherwise, in the calmer parts the sound was very sharp and clear. Joel pointed out how long it’s been since their last visit to Finland, as they skipped Finland in the Lykaia Tour. They made it up by playing ‘Opal’, which stood out with its gloomy riffs and powerful chorus.

With ‘Rival’, they went back to their latest release, featuring a more modern sound and more aggressive drumming by Martín Lopez, waking up the audience and making them sing along the catchy phrase ‘for all the fire’ at the top of their lungs. ‘Tabula Rasa’ was the only song taken from “Tellurian”, with its angry beginning evolving into playful rhythm patterns. Next in line was one of the highlights of the evening, a brilliant interpretation of the magnificent ‘Lascivious’, which seemed to be the favorite of most people in the audience, including me. It is certainly one of their best tracks and it works perfectly in the live setting. An epic moment to remember for the rest of our lives.

‘Jinn’ calmed things a bit, featuring a softer vocal line and melancholic melodies full of middle-eastern vibes, creating a special atmosphere matched very well by the lightshow. The dramatic way to end the songs added some theatricality to their stripped-down stage setting. ‘Opponent’ brought back the energy, adding contrast to their set. It is a song that summarizes the essence of their current sound, more straightforward and modern. After a short introduction of the band members, they revisited “Lykaika” once again with an inspired rendition of ‘Lucidity’, becoming one of the most emotional moments of the show. I must remark the great contribution of Lars Åhlund, who, in addition to keyboards, guitars, and percussions, did some amazing vocal harmonies with Joel.

‘Martyrs’ was another crowd-favorite, played with great precision and loads of soul, with its intense riffing and drumming, progressing into a catchy chorus which was sung very loudly by the audience. The only thing that kept bothering me was the excessive volume of the low frequencies, which made a bit difficult to enjoy the music during the more intense segments. Before leaving the stage for a brief break, they went all the way back to their first album “Cognitive” with ‘Slithering’, featuring a more raw and darker sound, showing how the band has evolved during the last seven years. It is clear that their current style appeals a wider audience, with a greater potential to become a big international act.

The encore began with ‘Savia’ and its haunting vocals, complex rhythm and catchy chorus, including pitch-perfect harmonies. It stands out as one of the best tracks from their early days. An intense performance of ‘Sectarian’ brought back the modern elements of their music, featuring again plenty of vocal harmonies which sounded just like in the record. The cherry on top was the beautiful ‘Lotus’, interpreted with a lot of emotion and sensibility. I still remember when I first listened to this song in the bus on a dark winter day on my way home from work, and it still manages to move me the same way every single time. A true masterpiece and the perfect way to end the evening.

As usual, getting out of The Circus took quite a while because they insist in hiring four guys at the cloakroom to return hundreds if not thousands of jackets. Regardless of that, everything else went smoothly, people were in a great mood (except for the singer of THE PRICE, who maybe should work on his modesty). WHEEL and SOEN were a fantastic combo and I wish they keep touring together and releasing amazing albums like they did this year. Maybe next time I’m going to take a bit of distance from the stage since the bass was so loud. All in all, it was a great evening for prog-heads in Helsinki and a night to remember for the years to come.

See all the show photos, below: 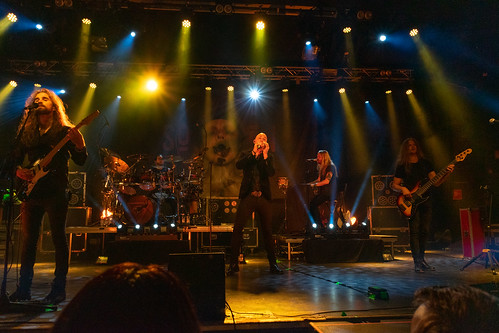