German metal titans ACCEPT have posted a thank you message to their fans on completion of their “Blind Rage” tour for 2014. The message was posted on the band’s official website and also their official Facebook page. Check out what they had to say:

ACCEPT have been touring constantly for the last few months following the release of latest album “Blind Rage” and will be on the road again in 2015. To check our recent interview with mainman Wolf Hoffmann where touring was one of the topics discussed, visit here. 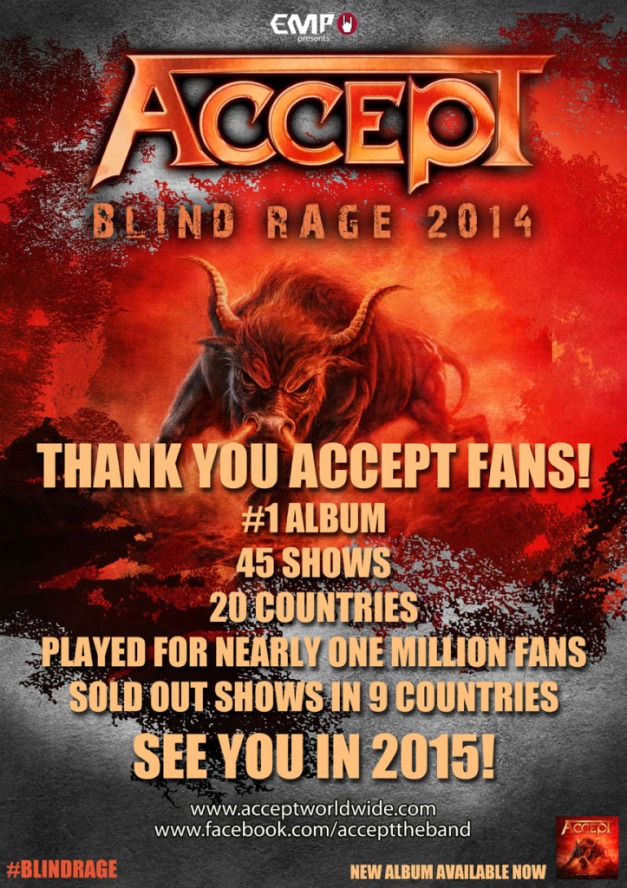 English heavy rockers VOODOO SIX have been announced as the support band on ACCEPT‘s London leg of their “Blind Rage” Tour. The show will take place at The Forum on 27th November and tickets can be purchased at this location.

For more information on the worldwide “Blind Rage” tour dates, visit the official ACCEPT website here. To join the Facebook event for the show, visit this location.

Check out some VOODOO SIX below:

Heavy metal giants ACCEPT have announced they have had to cancel the Strasbourg show on their “Blind Rage” tour. The show was due to take place on 16th October. You can read the statement below:

The next date on the tour which recently landed in Europe, will be the sold out show in Pamplona, Spain on 10th October. For the full list of tour dates, check the official ACCEPT website here.

ACCEPT: “Blind Rage” Tour Selling Out Around The World

Since their highly anticipated shows for the 80,000 metal heads in WACKEN,Germany and the 750,000 festival fans in WOODSTOCK, Poland in August it can be said, that the European media has picked up on the impressive, convincing, powerful and very energetic performance of ACCEPT. They nailed it and the buzz is out! The band is on a run and they can proudly claim they are going somewhere: Sold out shows either way before or at the day of the show. Sold out shows on the 2014 BLIND RAGE World Tour include:

And more to come! PARIS, MUNICH, BERLIN, COLOGNE & FILDERSTADT all need to be watched, if you want to go get your tickets NOW! For more information check the official ACCEPT website at this location.

With their “Blind Rage” album released in August 2014 and chart entries from #1 in GERMANY and FINLAND to top 100 in 25 countries around the globe ACCEPT celebrate the most dramatic success of their career. ACCEPT’s place as one of the historic bands who have inspired generations of musicians and as one of the well deserved and proven TOP LIVE ACTS in recent times. You can take them to the bank and you can be sure they will not show any signs of slowing down as Wolf Hoffmann and Peter Baltes, crowned by their mighty vocalist Mark Tornillo, are bringing their powerful performance to the max, leaving exhausted, but very happy fans behind and off to the next show.

For a recent fan live report of the show from Helsinki, Finland, see here.

Next date on the tour is tonight in Antwerp, Belgium, then tomorrow, 8th October in Paris, France. Check out a message from Wolf and Peter:

Teutonic heavy metal pioneers ACCEPT recently had another magnificent performance in Helsinki, Finland. With the release of their newest album, “Blind Rage” hitting the Finnish chart at the number one position, it was very predictable that this show would be sold out, and indeed it was. Metal Shock Finland is always proud to support true metal and now we are glad to present to you some fan filmed footage, a photo gallery and live report of ACCEPT’s show in Helsinki, all done by one of the band’s Finnish die hard and proud fans Saku Ovaska.

Check out this video footage of the band playing their timeless song ‘Metal Heart’ in Helsinki on 28th September below:

Check out Saku’s live report about his experience of a night with ACCEPT and their metal:

German heavy metal legends Accept arrived again to entertain their fans in Helsinki this autumn. The band enjoys great popularity at the moment in Europe and in Finland the latest album “Blind Rage” went to the top of the charts.Also, the concert venue The Circus, in central Helsinki was almost full.

The two-hour set kicked off with an air of pride, showcasing the new album, by starting with first track, the very fast ‘Stampede’, giving the audience what they had come for!

The crushing riffs, powerful choruses and, above all, Wolf Hoffmann’s elegant, melodically harmonious guitars came into their own at the forefront of the stage. Accept today can be proud of the fresh-sounding vocalist Mark Tornillo era of production and the setlist was mixed of half new material and old. Hoffmann, the lead guitarist, the bassist Peter Baltes and singer Tornillo take care of the entertainment mostly at the front of the stage. Second guitarist Herman Frank has restricted himself to play more in the background, with the exception of. a few of the common solos and choruses.

Accept is a fine position as a band now that the new production has been received very well and the songs chosen from the old material to work with on stage are completely timeless. Sure, tracks such as ‘Princess Of The Dawn’, ‘Losers And Winners’, ‘London Leatherboys’ and great classics such as ‘Balls To The Wall’, and ‘Metal Heart’, which we heard as the encores, are treasures to the fans.

The two-hour show was entertaining and effective. Accept is in very good shape as a band and the audience left the scene with a smile. It is easy to see that the band still has many good years ahead. Thank you Accept and come back soon!

Honourable metal fan Saku Ovaska  took several high quality photos of that heavy and metal night with ACCEPT and he gave us permission to share them with you here. So enjoy looking at these photos or feel free to be jealous if you missed an ACCEPT show in your local venue.

Heavy metal giants ACCEPT have had a dynamic start to their Blind Rage tour, setting the pace for their shows around the world! The tour began on 11th September in California and the four US shows went down a storm with fans, who gave rave reviews and many special stories about their experiences with ACCEPT. Here are some comments from fans:

Mike McQuerter – It’s obvious you guys are not just going through the motions to earn a paycheck. The band sounds like a freight train crashing through a wall. The music is the tight and sounds dead on. I dare to say Accept is at a level it’s never been before and this is a good thing. Listening and watching Accept live really pumps you up and makes you feel alive. Well done guys. 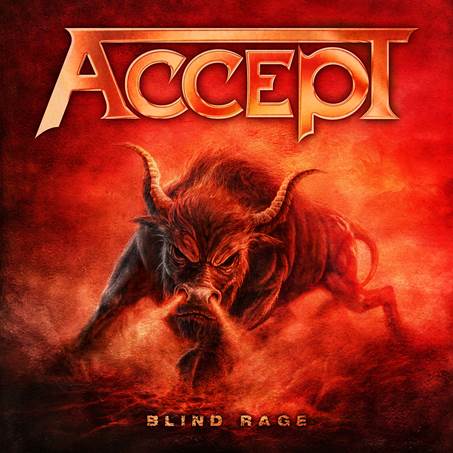 The band have now hit Europe running, with a sell out show in Copenhagen, Denmark last night, Friday 19th September. This weekend’s shows take place in Sweden, then ACCEPT land in Finland to give four storming shows! Any Finnish fans who have not yet got a ticket need to act fast if they want to be a part of the Teutonic Terror, check here for ticket information. Support comes from Helsinki metallers BATTLE BEAST and  Australian metallers DAMNATIONS DAY. The shows will take place on the following dates, with venues and locations listed:

Check out the show trailers with a message from Wolf Hoffmann and Peter Baltes below: 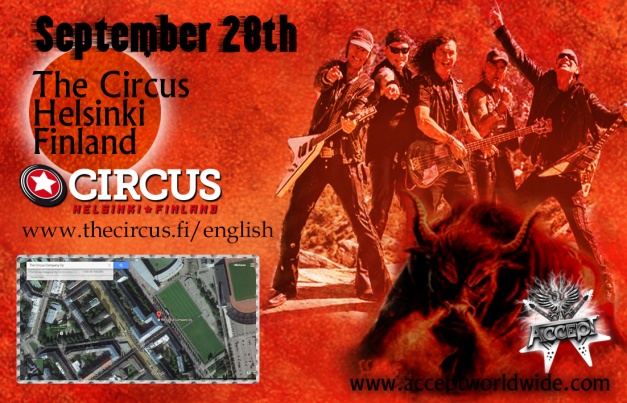