Nine-year-old Japanese drum prodigy Yoyoka Soma returned to The Ellen Degeneres Show Tuesday where she received a surprise from one of her idols, Dave Grohl, reported Jon Blistein from Rolling Stone.

Soma, who’s completely self-taught, became a viral sensation last year with a remarkable cover of Led Zeppelin’s “Good Times Bad Times.” She continued to post videos online, performing inch-perfect renditions of tracks by the Police, Peter Gabriel and the Red Hot Chili Peppers. In February, she performed Queen’s “Stone Cold Crazy” on Ellen, while around the same time she uploaded a rendition of the Foo Fighters’ “The Pretender.”

Read the whole article at this location.

Apparently, things don’t go to 11 in Cornwall. As Plymouth Herald reports, a teenage heavy metal band named BLACK LEAVES OF ENVY, who reside in Cornwall and practice in a family garage, have been asked to turn things down. So, the band appealed to a higher rock power, writing to Dave Grohl to ask that he support them. The FOO FIGHTERS‘ frontman responded by writing an open letter to Cornwall Council in the UK, reports rollingstone.com.

The Cornwall Council asked the band to take their sound levels way down to 30-40 decibels. The noise restriction is about the equivalent of the hum from a refrigerator or noise of a dishwasher and one of the teen’s fathers told Plymouth Herald that the group has not been able to practice in three months since it can’t feasibly rehearse at that low level. In the open letter posted on Foo Fighters‘ website, Grohl addressed the Cornwall Council, explaining that “the band is having difficulty functioning within the current noise restrictions placed upon them.” 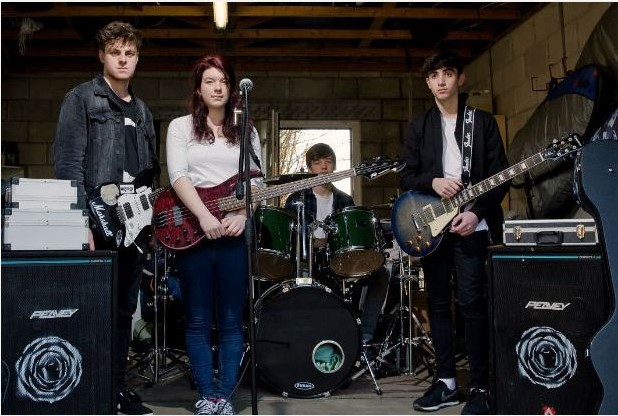 He also appealed to the greater good of music, referring to how he started in a garage as well and how it informed his adolescence and helped him through difficult times. “Music is not only a healthy pastime, it is a wonderful creative outlet for kids, and fosters a sense of community necessary to the emotional and social development of any child,” he wrote.

Grohl stressed the importance of having an affordable locale to foster musical talents. “I believe that it is crucial that children have a place to explore their creativity and establish a sense of self through song,” he wrote. “The preservation of such is paramount to the future of art and music. Without them, where would we be?” He added that his own children are benefiting from his making that a priority at his own home.

“For the sake of your local band Black Leaves of Envy, and for the generations of young musicians that they may eventually inspire, I ask that you reconsider the restrictions put upon the volume of their private rehearsal space,” he concluded. “I believe that in doing so, you will be sending a message that Cornwall is not only a home to music and the arts, but a place that encourages children to follow their dreams in a world where anything is possible.”

While Grohl went to bat for some teens in Cornwall, the band also recently went to bat for themselves to once again refute rumors of their impending breakup via a funny video.

FOO FIGHTERS mainman Dave Grohl has had his drum-off with Animal from the Muppets, as reported by classicrock.com.  Check it out below:

The showdown was announced last month and was aired on ABC TV last night, with the pair going all-out in an effort to best the other – although both concede defeat after trashing their kits after a frantic battle.

Grohl previously appeared in 2011 movie The Muppets as a character called Animool in spoof band The Moopets, fronted by Fozzie Bear. The former Nirvana drummer was only seen for around five seconds, dressed in his own version of Animal‘s jumpsuit, collar and chain.

In 1981, Animal battled Buddy Rich in a drum-off on the long-running puppet franchise.

Last Sunday, July 26, Rockin1000.com organized by its creator Fabio Zaffagnini, an incredible performance never tried before, where 1000 rockers played at the same time and in the same place “Learn to Fly” to ask FOO FIGHTERS‘ Dave Grohl to come and play in Cesena, Italy. For more information about this great project, go HERE,  Facebook Event Page HERE. Watch the video below.

And today Dave Grohl gave his reply, posting a video message, in Italian, on Foo Fighters’s Official Facebook page, promising to come to Cesena soon to play, watch it below.

Dave Grohl tried to be the toughest man in Sweden … after falling off stage, breaking his leg — and attempting to keep the concert going, according to tmz.com.

According to Swedish witnesses (thanks Google translate) … it seems the Foo Fighters frontman jumped down from the stage early on during the band’s concert  tonight, and sustained a pretty serious injury.

Still, Dave kept on singing, ironically … “Under Pressure.” But once the song was over … Grohl had to wave the white flag, and announced they were gonna have to cut the show short since he needed medical attention. Dave says he thinks the leg is broken.

And founder Reed Mullin, drummer with Corrosion Of Conformity, promises that people are going to love the “hardcore punk, punk and metal” that they are making.

Mullins reports: “We had all these other folks who wanted to participate. It’s a very good mixture – people are going to be pleasantly surprised. It’s pretty cool.”

No further Teenage Time Killer information has been released. Meanwhile, Grohl is busy with making a new Foo Fighters album after saying last year: “We’re going to make this album in a way that no one’s ever done before. We’re pretty excited about it.” Taylor is at work on Slipknot’s first record since the death of bassist Paul Gray and the acrimonious departure of drummer Joey Jordison.