The metal rampage will kick off on Thursday 23th of March at Plutonium in Strasskirchen, Germany, and will continue throughout Europe hitting Slovenia, Italy, Switzerland, France, Belgium, Germany, The Netherlands, Czech Republic, Poland and Hungary before concluding at Vienna Metal Meeting in Austria on Saturday 8th of April 2017.

All currently announced tour dates are shown below. 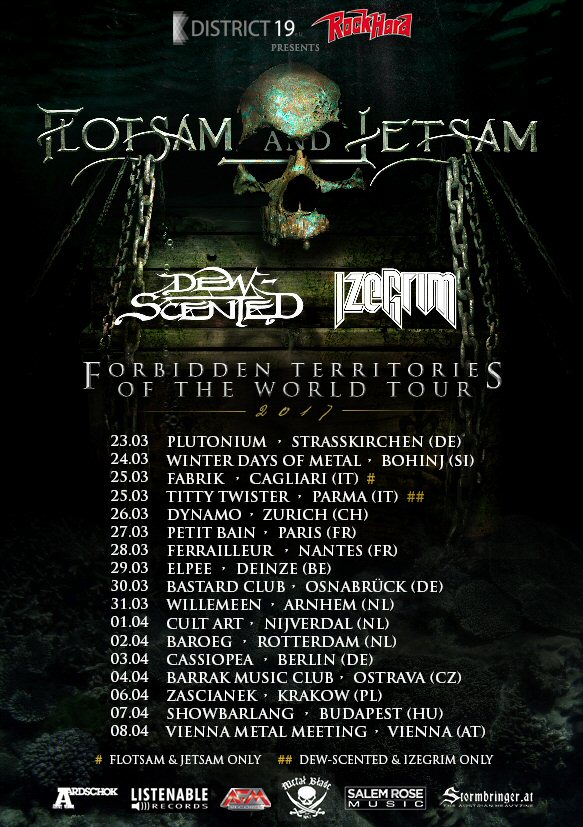 After a recent successful tour with German thrash giants DESTRUCTION, FLOTSAM & JETSAM will return to Europe as a headliner to promote their latest self-titled album, which is out now on AFM RECORDS. Besides that, the audience can expect to hear classic songs from albums like ‘Doomsday for the Deceiver’ (which turned 30 years old this year!) and ‘No Place for Disgrace’.
FLOTSAM & JETSAM commented, “We’re looking forward to bringing our headline show to Europe next year, with us doing at least 80 minutes a night of Flotsam classics, as well as fan favorites, off the new album. We’re known to change our set list up from show to show, so if a city has enough requests for a certain song, we’ll play it for you to make your show a little more special. Looking forward to seeing all our friends at these shows.“